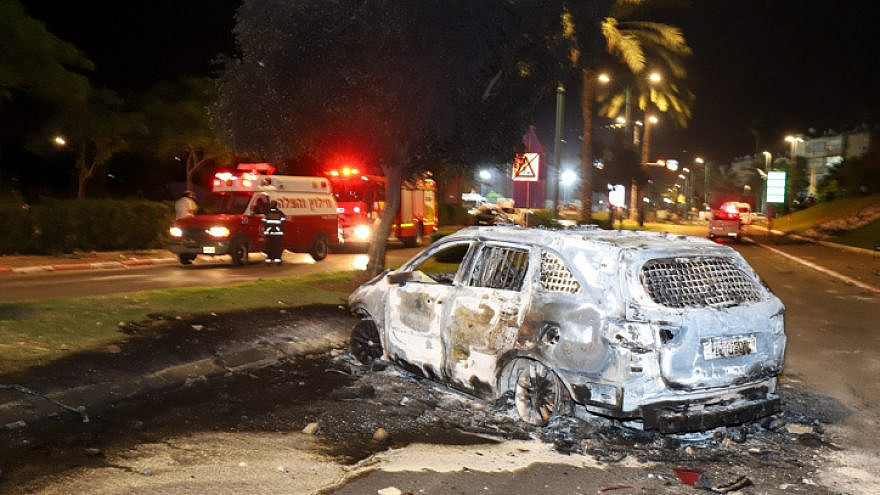 (May 11, 2021 / JNS) The central Israeli city of Lod was placed under emergency lockdown on Tuesday night to clamp down on violence undertaken by Arab residents there.

The population of about 80,000 Jews and Arabs saw rioting and looting on Tuesday night. Arab mobs were seen throwing stones, Molotov cocktails and fireworks at police, while also burning trash cans and tires. They also firebombed the Maoz yeshivah, with a synagogue and dozens of cars belonging to Jewish residents set on fire.

Israel’s Defense Minister Benny Gantz ordered the country’s border police to come back up the local police, which was overwhelmed by the onset of attacks.

“I have been receiving updates all day on what is happening here in the city, and I view it extremely gravely. It’s anarchy from rioters that we cannot accept,” he said, vowing to “restore law and order.”

According to reports, 12 people were wounded in clashes with two in serious condition.

Israel Police Chief Kobi Shabtai said the situation harkened back to the start of the Second Intifada. “We have not seen this kind of violence since October 2000,” he said.

Lod, in central Israel, is adjacent to Israel’s Ben-Gurion International Airport, which was temporarily shut down earlier in the evening due to incoming rockets from the Gaza Strip.

Mansour Abbas, the head of the Arab Ra’am Party, called for calm in Lod and neighboring Ramle, saying that while he understood the anger “things are developing in very dangerous directions, as peaceful popular demonstrations have turned into direct clashes which threaten the lives and safety of our youth.”