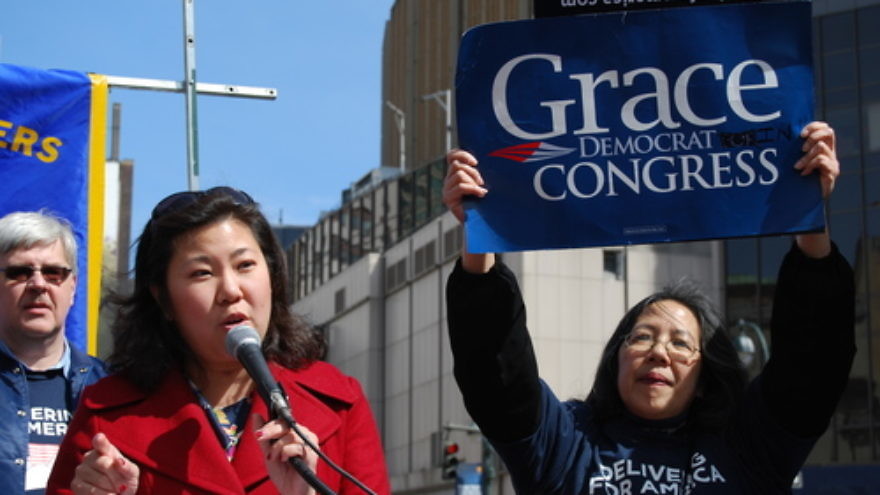 She may not be flashy, a firebrand speechmaker, or even very well known outside of her Queens congressional district, but despite her brief legislative career, freshman U.S. Rep. Grace Meng (D-N.Y.) has become one of Congress’s most steadfast supporters of Israel and Jewish issues. Along the way she has endeared herself to colleagues and supporters on both sides of the aisle and the Jewish community in her district.

Meng’s demeanor, both in conversation and in Congress, reflects a modesty and candidness many of her media-darling colleagues lack, or have lost. Though it may not put her in the national spotlight, her approach appears to have paid off in winning favor with the voters at home.

Meng, 38, represents New York’s 6th District, covering the largely immigrant communities of Central Queens, Forest Hills and Flushing. According to data from the Berman Jewish Databank, the district ranks ninth in the country in both population and percentage of Jewish residents. The largest population in her district is Asian-American and Meng sees herself as a bridge between the very different cultures she represents.

“I think that among Grace Meng’s greatest distinctions is her honesty. She is very direct and very, very sincere,” says Michael Miller, executive vice president and chief executive officer of the Jewish Community Relations Council of New York, who has known Meng since her time in the New York State Assembly. “Members of Congress and other elected officials have been roundly criticized for being corrupt and insincere. I have found Grace Meng to be honest and most sincere. And that’s why I think many in the community have great respect for her.”

Another reason may be that so much of the legislation she sponsors or supports appears to reflect Jewish interests.

On May 28, Meng spoke on the floor of the House of Representatives in favor of the Protect Cemeteries Act, which will amend the International Religious Freedom Act of 1998 to include vandalizing and desecrating cemeteries in countries around the world as a consideration used by the United States in determining whether a nation is violating rights to freedom of religion. Meng was the bill’s sponsor.

She said that the act will serve as a tool for the U.S. to oppose violations of religious freedom that occur in countries in which the Jewish population was wiped out during the 20th century, leaving their ancestral remains which serve as targets for anti-Semitic vandals, or in municipalities looking to develop on sanctified ground. Among the key supporters of the bill was the Orthodox organization Agudath Israel of America.

The vote may have been preordained—it passed by a unanimous voice vote. But for those who were keeping track, it was another Jewish-friendly act by Meng.

During her House speech, Meng thanked a New York Institute of Technology physics professor as an inspiration for the legislation. Bernard Fryshman has been working to protect and preserve Jewish cemeteries for 30 years and was delighted the bill passed.

“You know this bill is not going to result in the marines going on behalf of a cemetery,” Fryshman told JNS.org. “It provides a moral suasion. It provides a vehicle for conversation. It provides a basis in which the State Department is trying to help a government in Europe decide maybe they should step in and not allow a local municipality to dig up a Jewish cemetery.”

Since she came to Congress in 2013, Meng has worked on issues related to the State Department’s denial of tourist visas to young Israelis. She voted for and sent a letter to Senate Majority Leader Harry Reid (D-Nev.) and Minority Leader Mitch McConnell (R-Ky.) to take up legislation to tighten sanctions on Iran’s energy and financial sectors. She led an effort to lobby the European Union to designate Hezbollah as a terrorist organization. She sponsored and passed legislation to make houses of worship eligible for federal disaster relief funding after Hurricane Sandy. All are actions that would be applauded by many in the Jewish community.

In a phone conversation with JNS.org, Meng said that she feels a connection to the Jewish community, having grown up in multicultural Queens.

“Obviously, I’m not [Jewish] but I represent a district that has a large Jewish constituency,” she said. “I think honestly, growing up as a kid in New York, issues that are important to members of the Jewish community—especially now that I’m in Congress—I think they’re very important to Americans.”

She was born in Queens to Taiwanese immigrants, whom she says instilled in her at an early age] the value of community service and faith. Though Meng is a Democrat with a liberal voting record, she feels that she has no trouble being accepted by the large haredi population in her district, recently being a guest at Agudath Israel of America’s annual gala.

“I grew up in a religious household, my family is Christian,” said Meng. “My grandma is sort of the matriarch of our family and has always tried to instil religious values in our upbringing and so I can empathize with [most Orthodox members of the Jewish community], even though we may not always agree. My job is to listen and see how I can best address the needs of constituents living in my district.”

Meng attended the prestigious Stuyvesant High School on Long Island and then completed her undergraduate work at the University of Michigan. Wanting to move closer to her home for a law degree, she attended the Cardozo Law School, part of the Jewish-run Yeshiva University.

“Honestly, I didn’t really think about that it was considered a Jewish school,” she said. “I mean obviously I knew it but I knew that I wanted to be back home. It was a school where I heard the faculty was really excellent. And I got to meet [Israeli] Prime Minister [Benjamin] Netanyahu for the first time when I was there, so it was pretty cool.”

She was elected to the New York State Assembly in 2009. The next year she visited Israel the first time. That experience, along with a return visit last year as part of a congressional delegation, solidified her views on Israel, she said.

Meng won her congressional seat in 2012 after beating Republican Daniel Halloran 68 to 31 percent. But in her heavily Democratic district, the primaries were the real battle. Meng beat three other candidates by a 53 percent majority. Inaugurated in January, she is the first Asian American to be elected to Congress to represent New York City.

Upon taking office, Meng successfully sought a seat on the House Foreign Affairs Committee and the Middle East and North Africa subcommittee, where she works on many Israel-related issues.

Meng views Iran’s potential to develop a nuclear bomb as a critical issue for the security of Israel and the U.S. and has pushed for sanctions against Iran.

Michael Schmidt, New York regional director for the American Jewish Committee (AJC), who has worked with Meng on Iran and other issues, called her a “strong ally.”

“I think this is not exclusively a Jewish issues,” he said. “Obviously the fact that the Iranians have threatened to completely destroy and decimate Israel means that Israel has a special place in terms of concerns. But this is an issue beyond just Israel. It’s about Western values and democracy and how we operate—and I think she recognizes that.”

Meng has also taken a taken a tough stance against the Boycott, Divestment, and Sanctions (BDS) movement popping up at college campuses throughout the U.S. She worked with AJC on a project to create fellowships on college campuses to foster understanding among students of different backgrounds. When the Association for Asian American Studies voted in 2013 to back BDS efforts, Meng criticized the vote in a letter to the association.

Meng is up for re-election this fall. As she considered her home district, she revealed her familiarity with one of her largest constituent groups.

“One of my favorite parts of my district activities is when I get the opportunity once in a while to walk around certain neighborhoods in my district, let’s say during Shabbos, and to see a lot of the families walking around going to shul together, spending time together with family,” she said. “I think that’s amazing and that’s something that every culture could learn from.”