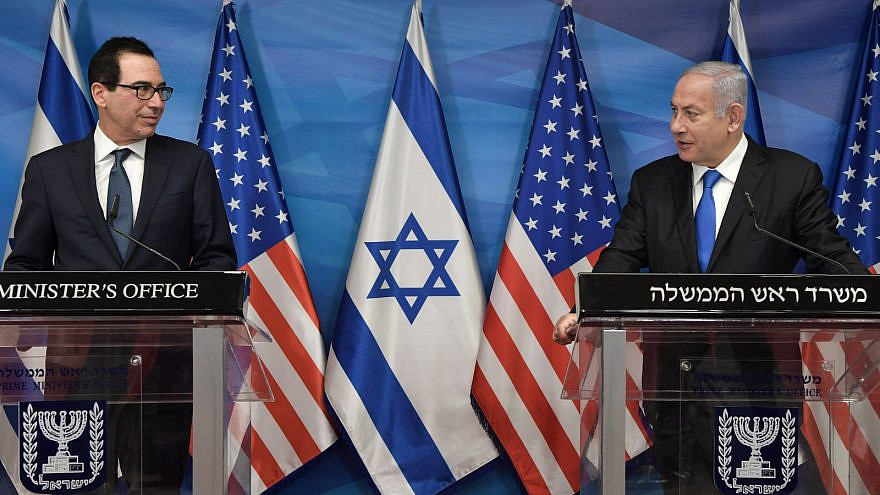 (January 7, 2021 / JNS) Israeli Prime Minister Benjamin Netanyahu issued a strong condemnation on Thursday of the attack on the U.S. Capitol by a mob of Trump supporters the day before, calling it a “disgraceful act.”

“For generations, American democracy has inspired millions around the world and in Israel,” said Netanyahu, following a meeting in Jerusalem with U.S. Treasury Secretary Steven Mnuchin, who arrived in the country from a visit to Khartoum, during which Sudan formally signed on to the Abraham Accords.

“Lawlessness and violence are the opposite of the values we know Americans and Israelis cherish,” he said. “The rampage at the Capitol was a disgraceful act that must be vigorously condemned.”

Mnuchin, who will be returning to the United States following his Jerusalem visit, also condemned the attack on Capitol Hill as “completely unacceptable” and indicated that he would not be resigning from office as some other senior staff at the White House have done in the wake of the violence.

At the same time, the Israeli leader thanked U.S. President Donald Trump for his administration’s role in normalizing ties between Israel and several Arab countries.

“I want to thank President Trump and all of you in the administration for all you have done and are doing for peace. You’ve made a real difference, achieving one breakthrough after another, bringing the UAE, Bahrain, Morocco and Sudan into the circle of peace. I have no doubt that more Arab and Muslim countries will follow,” said Netanyahu.

In addition to Netanyahu, other top Israeli officials panned the violence in Washington on Wednesday.

Foreign Minister Gabi Ashkenazi said that he was “shocked” by the attack, adding that “the United States, our great and strong friend, is a beacon for democracy and for values of freedom, justice and independence.”

“I never believed I would see such images from the world’s most powerful democracy,” said Gantz.

Gideon Sa’ar of the New Hope Party, who will likely be Netanyahu’s biggest rival in the upcoming election, said he was saddened by the images he saw.

“The events serve as an important reminder of the dangers of polarization and extremism in society. We must never take democracy and its institutions for granted,” said Sa’ar.

Four people were killed and 52 arrested in the incident, which resulted in the activation of all 1,100 members of the D.C. National Guard and the imposition of a citywide curfew.