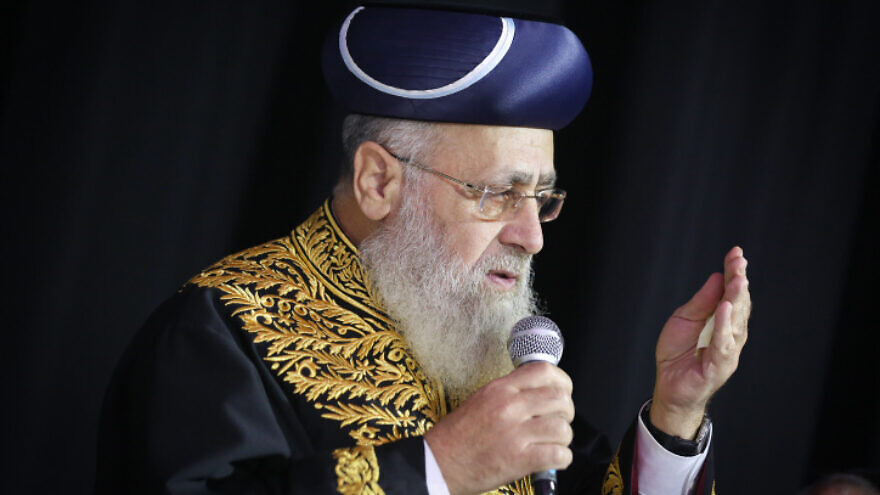 According to Ynet, at a rabbinical gathering in Jerusalem last week, Rabbi Yitzhak Yosef railed against the “many, many non-Jews” who had immigrated to Israel from the FSU, some of whom he said were “Communists, hostile to religion, haters of religion.” After being granted citizenship under Israel’s Law of Return, said Yosef, “they then vote for parties that incite against the ultra-Orthodox and against religion.”

Netanyahu said on Tuesday that on the contrary, the immigrants from the FSU were a “huge boon” to the country.

The Law of Return grants citizenship rights to anyone with a Jewish grandmother or grandfather. However, Jewish law and the chief rabbinate state that the Jewish status of offspring are determined by the matrilineal line; the child of a non-Jewish mother and a Jewish father is not considered Jewish.

Yitzhak also decried rabbinical judges who are he said are overly lenient in performing conversions and warned the emissaries to steer clear of conversions in their work due to the difficult religious intricacies.

Yisrael Beiteinu Party leader Avigdor Lieberman, who is an immigrant from the FSU himself and who has attracted support primarily from secular FSU immigrants, condemned Yosef’s statements as “anti-Semitic and racist,” and demanded that the religious leader be investigated for incitement, saying he is “not the chief rabbi, but the chief inciter.”

Knesset Speaker Yuli Edelstein of the Likud Party, who was a Prisoner of Zion in a Soviet jail for three years before immigrating to Israel, warned that “there is no room for the invalid discourse of hatred and division,” adding that “Israel cannot be imagined without the huge contribution of immigration from the USSR.”

Rabbi David Stav, a co-founder of Tzohar, an Israeli organization of religious Zionist Orthodox rabbis, said “the chief rabbis of Israel should be held responsible to find a solution to the challenge of assimilation within Israeli society that has come about in part due to their failures in properly addressing conversion issues. Tzohar will continue to assist immigrants to Israel and to prove their Jewish identities through our Shorashim project in close partnership with the rabbinical courts and rabbis.”

In the wake of the uproar, Yosef clarified his remarks, saying, “Along with the blessed immigration of Jews from the former USSR, who gave their lives for the protection of Judaism, there is a minority of immigrants who are not Jewish according to halachah, who migrated here on the back of the ‘grandson clause’ in the Law of Return.”

He added that “anyone who lets these gentiles come here works out of superfluous considerations, and chiefly acts in a dishonest manner towards them.”