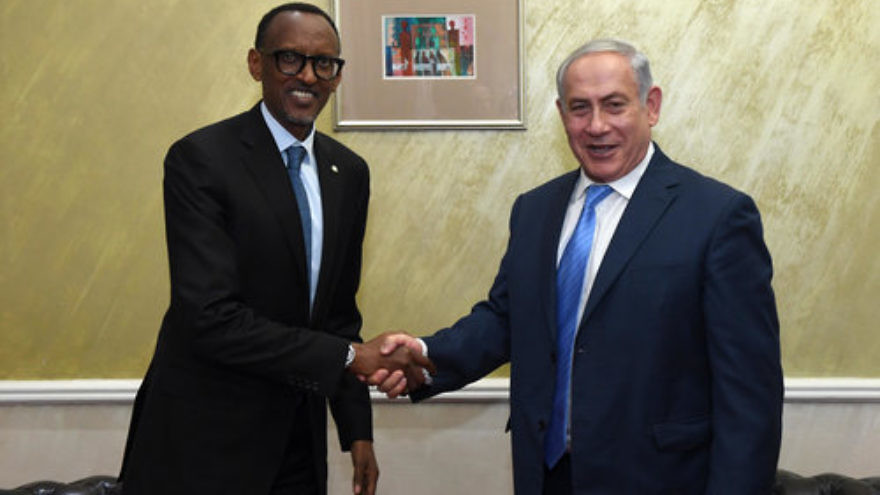 Decades after a massive diplomatic campaign by former Israeli Prime Minister Golda Meir to build relations with sub-Saharan Africa, current Prime Minister Benjamin Netanyahu has embarked on his own efforts to unite Israel with one of the world’s fastest-growing regions.

On Nov. 28, Netanyahu traveled to the Kenyan capital of Nairobi to attend the festivities surrounding the inauguration of President Uhuru Kenyatta. The one-day trip, though shorter than the Israeli leader’s historic four-state East Africa tour in July 2016 as well as his West Africa trip in June 2017, proved to be arguably just as productive, as Netanyahu announced the opening of a new embassy in Rwanda and met with leaders from nearly a dozen African nations.

“We are opening a new embassy in the Rwandan capital Kigali as part of Israel’s expanding presence in Africa and the deepening of cooperation between Israel and the countries of Africa,” Netanyahu said after he met with Rwandan President Paul Kagame in Nairobi. The leaders discussed the possibility of opening a direct air link between Israel and Rwanda, Netanyahu’s office stated.

Dr. Moshe Terdiman, director of the Research of Islam and Muslims in Africa (RIMA) think tank, said the relationship with Rwanda is strategically important for Israel as the Jewish state seeks to build greater support in sub-Saharan Africa in order to counter bias from Arab nations in international forums. Additionally, Rwanda is helping Israel address the issue of illegal African migrants.

“Many Israeli businesses and NGOs are active in the country, and just in recent days the Israeli government made a deal with Rwanda to pay $5,000 for each asylum-seeker living in Israel that [Rwanda] would accept, and it agreed to accept 10,000 asylum seekers,” Terdiman told JNS.org.

Rwanda and Israel established diplomatic ties soon after the country gained independence in 1962, but the African nation cut off ties with Israel in the aftermath of the 1973 Yom Kippur War, when most African countries, under Arab pressure, severed ties with the Jewish state. Yet ties were re-established in 1994, when Kagame rose to power.

Kagame, a former lead commander of the rebel Tutsi force that put an end to the Rwandan genocide, has been attempting to modernize his country and aims to boost relations with Israel in areas such as technology, agriculture, energy and security.

“Rwanda is open for business,” Kagame said during a two-day visit to Israel in July. “We look forward to welcoming private sector delegations from Israel even more frequently in the future.”

Rwanda has also been helpful for Israel in international forums like the United Nations. In 2014, when Rwanda was a rotating member of the U.N. Security Council, it abstained on a key vote pushed by the Palestinians calling on Israel to withdraw to the pre-1967 lines. Rwanda’s move denied the Palestinians the nine votes that the measure needed to pass.

Israel’s Shin Bet security agency prevented Netanyahu from attending the official inauguration ceremony for Kenyatta amid violent protests over the president’s victory in a controversial election do-over. Netanyahu instead attended a lunch event at Kenya’s presidential palace, where he met with 10 African leaders.

“Despite the fact that Netanyahu skipped the inauguration ceremony itself due to security reasons, he took advantage of the event in order to have a set of meetings with other African heads of state and delegations who attended the event,” he said.

Terdiman added, “It should be mentioned that Togo was supposed to host an African-Israeli summit this fall, but it was cancelled. Therefore, Netanyahu seized the opportunity to further promote relations with African countries.”

“This is my third visit to Africa in 18 months, and my second visit here in Kenya,” Netanyahu said. “We believe in the future of Africa. We love Africa and I would like very much not only to cooperate on an individual basis with each of your countries…but also with the African Union.”

Netanyahu mentioned a recent initiative by Israel to join the Power Africa project, an international program led by the U.S. that seeks to create 60 million new electricity connections for African households and businesses by 2020.

“We would like to work with you and with every one of your countries to electrify Africa,” said Netanyahu. “We believe in Africa. So for every, every one of your initiatives, there will be an initiative on our part to seize the future, to make life better and safer for your people.”

“We believe that we can better lives for people everywhere, but first in Africa,” he said.