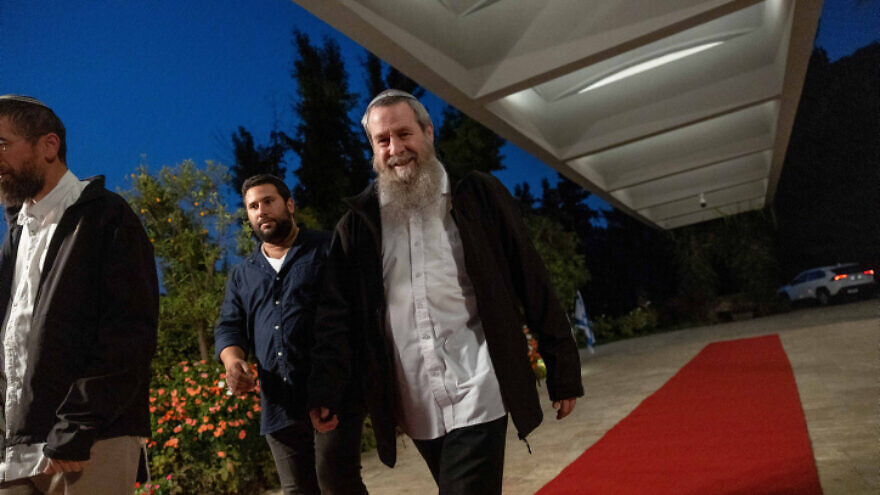 Maoz, an opponent of LGBTQ rights, will reportedly oversee a new department in the PMO in charge of strengthening Israel’s Jewish identity. While only some of the details of the deal were disclosed, one of Maoz’s responsibilities will reportedly be to manage immigration from the former Soviet Union.

Maoz has previously advocated for changing Israel’s Law of Return so that individuals with only one Jewish grandparent would no longer qualify for automatic citizenship.

The move to elevate Maoz has drawn widespread criticism, with Israeli Prime Minister Yair Lapid describing the development as “insane.”

The Noam Party ran in the Nov. 1 elections on a joint slate with Bezalel Smotrich’s Religious Zionism Party and Itamar Ben-Gvir’s Otzma Yehudit in order to increase the probability of each faction crossing the electoral threshold.

The alliance then split as planned shortly after the vote, with RZP maintaining seven seats in the Knesset, Otzma Yehudit six and Noam one.

Netanyahu on Friday forged a coalition agreement with Oztma Yehudit that will see Ben-Gvir appointed to the newly created position of national security minister, an expanded public security minister role with oversight over the national police and Border Police in Judea and Samaria.

According to Israeli media sources, additional portfolio roles expected to be given to Otzma Yehudit members include the Development of the Negev, Galilee and National Fortitude Ministry; the chairmanship of the Knesset’s Public Security Committee; the heritage portfolio through the role of deputy economy minister; and the rotating chairmanship of the Special Committee for the Israeli Citizens’ Fund.

Netanyahu on Sunday met with the heads of the other parties to be included in his prospective coalition, including RZP, Shas and United Torah Judaism.

For his part, Smotrich is widely expected to be appointed finance minister, after he reportedly walked back his initial demand to become the country’s next defense minister. Shas leader Aryeh Deri will, subject to his legal standing being clarified, likely head the Interior Ministry.

Likud Party lawmaker Amir Ohana is reportedly the frontrunner to head the Foreign Ministry, while fellow party member Miri Regev has been tapped to head up the Education Ministry.

The prime minister-designate has until Dec. 6, with the possibility of a 14-day extension, to finalize a coalition.