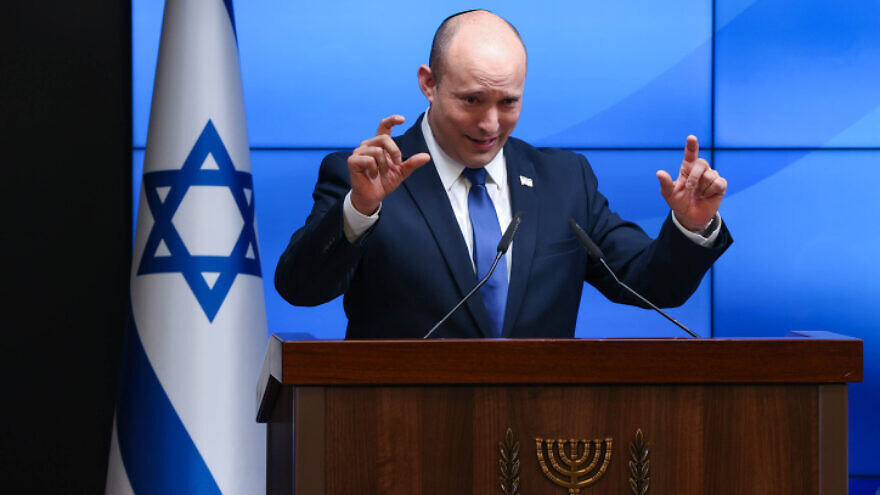 (July 7, 2021 / JNS) At the end of June, the new Israeli government led by Israeli Prime Minister Naftali Bennett approved 31 new building projects throughout Judea and Samaria. The projects were green-lighted by the subcommittee on Jewish “settlements” within the Civil Administration.

A Civil Administration spokesperson shared the list of approvals with JNS, which include the construction or enlargement of public buildings within various communities, such as a new shopping mall in Mishor Adumim just outside of Jerusalem, and a school for students with special needs in Elkana, east of Tel Aviv, along with new or upgraded buildings to house religious institutions and a total of five new private homes.

Among those who support expanding the Jewish presence in Judea and Samaria, some view the approvals as a positive development. Others, however, expressed their frustration, indicating that the 31 new projects—with just five residential homes—are token approvals and fall far short of expectations, based on the hundreds if not thousands of other building requests by local councils or residents.

At the same time, there are those who oppose Israel approving any new building projects for Jewish residents of Judea and Samaria, as they consider them to be obstacles to peace with the Arabs living under the Palestinian Authority.

Oded Revivi, mayor of the Gush Etzion community of Efrat, expressed his gratitude for the approval of several projects in his town. He told JNS that “all development in Judea and Samaria should be seen as a tangible demonstration of the recognition by the Israeli government of the permanence and strategic necessity of the continued growth of Judea and Samaria.”

He added, “While we fully anticipate further development, especially of residential units, I am encouraged by this announcement, as it should have the support of the broad center-left government, further demonstrating how the growth of Judea and Samaria is becoming a consensus issue in Israel.”

Elnatan Scharia, spokesman for the Yesha Council, the umbrella group representing the communities of Judea and Samaria, told JNS that his group felt the approvals were rather insignificant.

“We have been waiting for half a year, since January, for housing approvals, and it still hasn’t happened,” continued Scharia. “The Higher Planning Council must meet immediately to approve the construction of housing units throughout Judea and Samaria. We have waited long enough.”

‘Turn the ship in the direction of peace’

While the Yesha Council remains disappointed with the scarcity of new building permits, Hagit Ofran, from the Settlement Watch Project of Peace Now, shared her organization’s complete opposition to the 31 new approvals.

“Any building permit in the settlements is detrimental to Israel and distances us from the prospect of peace. One of the biggest challenges of the new government is to change the policy regarding the occupied territories. After many years in which the Israeli government did everything to prevent the prospect of peace, it is about time to turn the ship in the direction of peace and first of all to stop construction in the settlements,” read the text of a statement released by the organization.

At the same time, Scharia explained that last week, the Yesha Council met with Israel’s new Interior Minister Ayelet Shaked from the Yamina Party. A joint statement released following the meeting said that the two sides did discuss the fact that building approvals have been stalled as the Higher Planning Council hasn’t met in six months.

Shaked said in the statement that her ministry is “greatly committed to the communities of Judea and Samaria, to the wonderful residents and the amazing council heads.”

She added, “I paid close attention to the problems facing the community heads and their staff, and I am here to fight and act on their behalf. The current government will require a great deal of creativity, but I pledge that every effort will be made to resolve complex issues in order to develop the communities of Judea and Samaria.”

Scharia would not confirm an Israel Hayom report indicating that Shaked told members of the Yesha Council in attendance at the meeting that the status quo on building in Judea and Samaria would remain in place with the Higher Planning Council set to convene every three months in order to discuss the approval of construction, per a coalition agreement between Yamina and Israeli Defense Minister Benny Gantz.

Even if the report is accurate, it’s unlikely that Gush Etzion Regional Council head Shlomo Ne’eman would find hope in a Shaked-Gantz agreement.

Last month, Ne’eman accused Gantz of cutting a deal with U.S. President Joe Biden and his administration to block new Jewish construction in Judea and Samaria. Ne’eman refused to divulge his sources on the accusation of an official building freeze reached between Biden and Gantz.

However, he said it was Gantz who was preventing the Higher Planning Council from meeting, thus already causing a de facto building freeze in Judea and Samaria even before the formation of the current government.

In 2009, under severe pressure from U.S. President Barak Obama, then-Prime Minister Benjamin Netanyahu agreed to a 10-month building freeze on construction in Judea and Samaria to try and restart peace talks with the Palestinian Authority. That freeze did not lead to any tangible developments on the peace front.