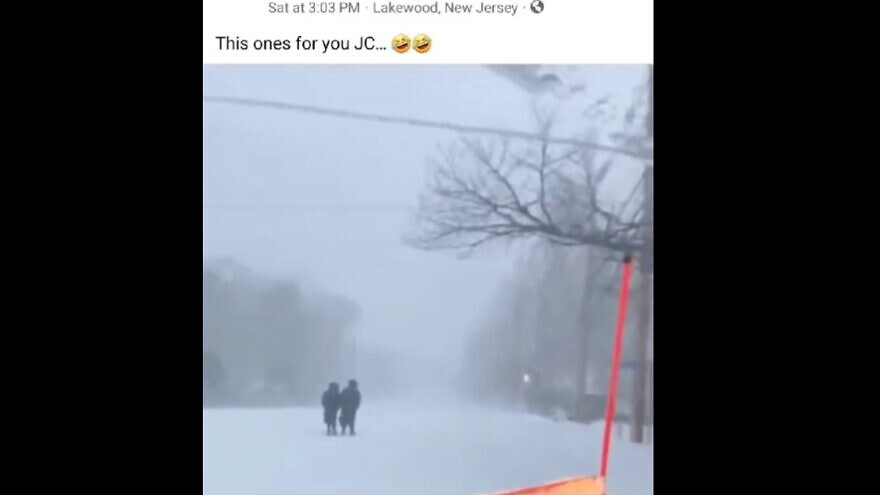 (February 1, 2022 / JNS) Law-enforcement officials in Ocean County, N.J., confirm they are investigating a snowplow operator who appeared to laugh and push snow from his truck over two Jewish men who were walking during a blizzard on Jan. 29 during the Jewish Sabbath.

In the video, snowplow driver Donny Klarmann and his friend Brandon Ebbs can be heard laughing as the plow is lowered and turned in the direction of the two Jewish men. As the plow passes them by, it dumps snow on them. Klarmann posted the video on his Facebook page with the words: “This one’s for you JC.”

The incident is being investigated by the Lakewood Police Department and the Ocean County Prosecutor’s office. The video has since gone viral, drawing ire and condemnation from Jewish groups and local residents alike.

Abhorrent antisemitism – @WasteManagement employee Donny Klarmann (photo in thread) uploads a video of him on the job purposely lowering his plow shovel in order to plaster two Orthodox Jews walking on Shabbat with snow! pic.twitter.com/90Ny4Q5Ero

Lakewood Mayor Ray Coles told a local online news site, The Lakewood Scoop: “I was appalled and shaken when I saw this video. Not only was it cruel, but it was also incredibly stupid and dangerous. The plow could easily have thrown chunks of ice or rock and seriously injured or killed either of the victims. I am glad to know our police department is taking this as the serious incident it is.”

The victims have been identified, though their names have not been released.

“I certainly hope the perpetrators will be prosecuted to the fullest extent of the law,” said Menashe Miller, a former Lakewood mayor and current deputy. “I want the message to get out that such acts of violence against our Lakewood residents will not be tolerated.”

‘This story isn’t a shock; we’ve seen it before’

The incident reportedly happened in Lakewood, where the Orthodox Jewish population accounts for more than 50 percent of residents. In recent years, Orthodox Jews have moved into neighboring towns, which has caused tensions within the county. Local reports suggest that the driver of the snowplow lives in Ocean County.

According to the Anti-Defamation League, nearly 300 incidents of Jew-hatred occurred in New Jersey in 2020, the last year that statistics are available. Of those, more than 50 took place in Ocean County.

While many found the incident disconcerting, the fact that the two men in the plow were so brazen about sharing the video is particularly troublesome, said Rabbi Avi Schnall, New Jersey director of Agudath Israel of America.

“We all know anti-Semitism is real. It’s alive and well, even here in the great United States of America. This story isn’t a shock. We’ve seen it before,” he said.

“What’s alarming is that the perpetrators weren’t ashamed to post it on their social-media accounts,” he added. “That they weren’t scared of any backlash, that they never hesitated not to publicize their bigotry. That, perhaps, is the scariest thing. When in some societies, anti-Semitism is OK and acceptable, and even comical. And these are people that live right near our neighborhoods.”

In a phone call with Jewish community leaders on Tuesday, Waste Management has confirmed that they have fired the employee, Donny Klarmann, and that the company was deeply disturbed by the incident.

“The moment we found out about it, we took action. We are very sorry that this incident occurred and that Waste Management was involved in any way,” said the company’s vice president of the Greater Mid-Atlantic Region, according to Yeshiva World.

Waste Management officials also said that as a result of the incident, additional sensitivity training programs for employees who work in Orthodox Jewish areas will be held.