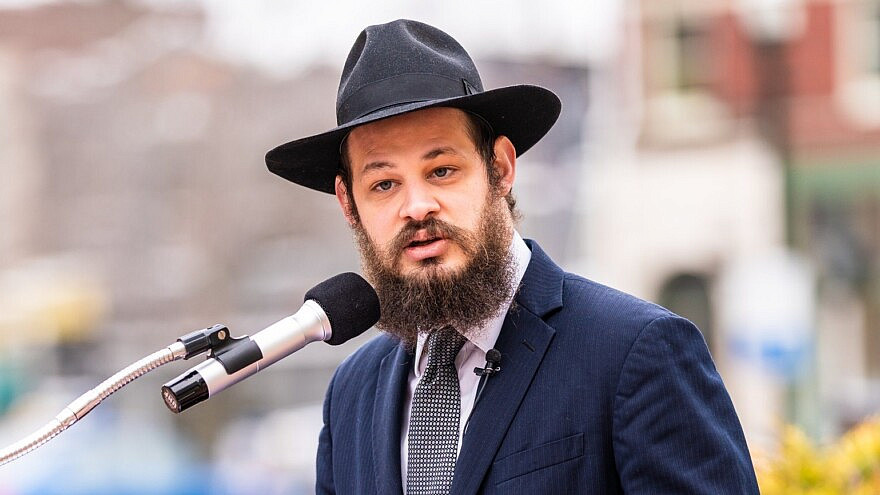 (January 5, 2023 / JNS) From an attempted murder of a Jewish candidate for political office, to a bomb threat at a Jewish Community Center, to the broad distribution of hateful propaganda by white supremacist groups, Kentucky experienced a notable rise in antisemitism in 2022.

Now, the Kentucky Jewish Council (KJC) is raising the alarm with its first-ever report documenting a wave of antisemitism in the Bluegrass State—30 incidents, to be exact, during the past year.

“Unfortunately this year we have seen antisemitism in Kentucky from a variety of sources,” KJC representative Rabbi Shlomo Litvin told JNS. “There have been some white supremacist incidents, and we have also seen a massive rise in the Black Hebrew Israelite hate cult, which has only intensified in the wake of Kyrie [Irving] and Kanye [West].”

Litvin also noted less overt but still destructive expressions of antisemitism, commenting, “We have also seen repeated issues in the political sphere, as well as in media, though not as bad as the frequent antisemitism in The New York Times.”

The eight-page report goes month by month in chronicling a slew of hate crimes and anti-Jewish harassment in Kentucky.

In January, the Kentucky Black Student Union received a series of fliers with antisemitic tropes and a list of Jewish figures. In February, Quintez Brown tried to murder Jewish mayoral candidate Craig Greenberg. Brown had previously posted antisemitic rhetoric and met with a hateful leader of a Black Hebrew Israelite group.

February also saw state legislators use the offensive term “Jew-them-down” and later meet with Jewish leaders in repentance. These politicians were Republicans Rick Girdler and Walker Thomas, the latter who admitted it was “second nature” to him to use such language. Further, the Nation of Islam contacted state legislators and urged them to act against the Jewish community.

In March, the Libertarian Party of Kentucky continued its history of offensive rhetoric and “doubled down on previous antisemitic posts, eventually blocking Jewish leaders and organizations,” according to the report. Kentucky’s Courier Journal published an op-ed by an activist which compared a local rabbi to Louis Farrakhan and Adolf Hitler, paragraphs that the newspaper later retracted. On March 23, the Jewish Community Center of Louisville received a bomb threat, prompting the building to close for the day.

April saw the distribution of antisemitic fliers by a white supremacist group, which the report noted “had occurred over a dozen times in recent months.”

In May, the University of Kentucky Jewish Student Center experienced a threat of violence as one student yelled “kill the k***s” at the center’s director. In a Courier Journal article, an activist group downplayed antisemitic incidents and accused the Jewish community of “crying wolf.”

In June, a candidate for the Kentucky State House engaged in Holocaust minimization on Twitter, “making comparisons between Nazi leaders and Kentucky elected officials, and comparing Kentucky policy to Holocaust edicts,” the report stated. Additional antisemitic social media activity from Kentucky political leaders surfaced in July, with the Bracken County Republican Party attacking the new director of the U.S. Bureau of Alcohol, Tobacco, Firearms and Explosives, Steve Dettlebach, as a “Jewish anti-gun activist” and part of a “Jewish Junta.”

August saw a Jewish family’s Louisville home defaced with antisemitic graffiti. No arrests were made. In September, a write-in candidate for the U.S. Senate launched a website filled with Nazi-inspired rhetoric and published a book titled “My Struggle 2.”

Finally, December concluded the year with two episodes of antisemitic harassment on campus. One University of Kentucky student was verbally harassed while preparing items at the Jewish Student Center. On Dec. 9, the university’s rabbi was threatened with violence when a passing motorist declared “Kanye is right,” an increasingly common declaration from antisemites.

In 2021, Kentucky became the first state in America to adopt the International Holocaust Remembrance Alliance’s (IHRA) definition of antisemitism.

Litvin offered a two-fold prescription for how to counter antisemitism in his state and more broadly.

“I believe all these issues have the same answer, which lies in education, and promoting a moral society,” he said. “Antisemitism cannot take root in a place of morality, and it’s much harder to hate those you know.”