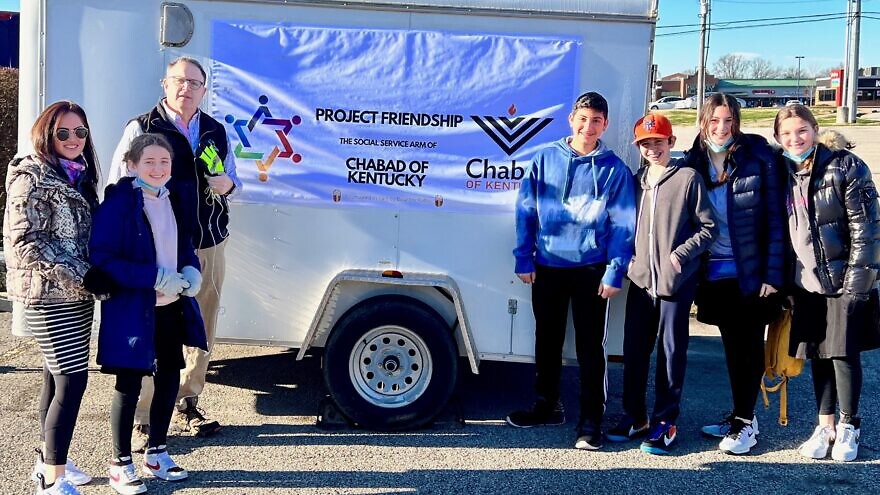 (December 30, 2021 / JNS) Winning the lottery usually conjures images of elated people feeling set for life after receiving a check for hundreds of millions of dollars. Yet for five North Shore Hebrew Academy (NHSA) students in the Long Island region of New York, winning the lottery meant being selected to represent their day school on an eye-opening, life-changing relief mission to tornado-devastated Kentucky.

On Dec. 10, a tornado with winds of over 166 miles per hour decimated the Kentucky of towns Cayce, Mayfield, Benton, Princeton, Dawson Springs and Bremen, killing 77, injuring hundreds and leaving thousands homeless.

Faculty and students at NHSA, located 1,000 miles northeast of the devastation, knew they had to do something. The school learned of an urgent need for assistance with food and clothing distribution as well as emotional support.

Seventh-grade students who were vaccinated against COVID-19 and interested in being considered for the trip entered the lottery. Five students, Aaron, Chloe, Jeremy, Orly and Shirel, were selected to join Jamie Lassner, director of student programming, and math teacher Yael Eleyahouzadeh (Ms. E). 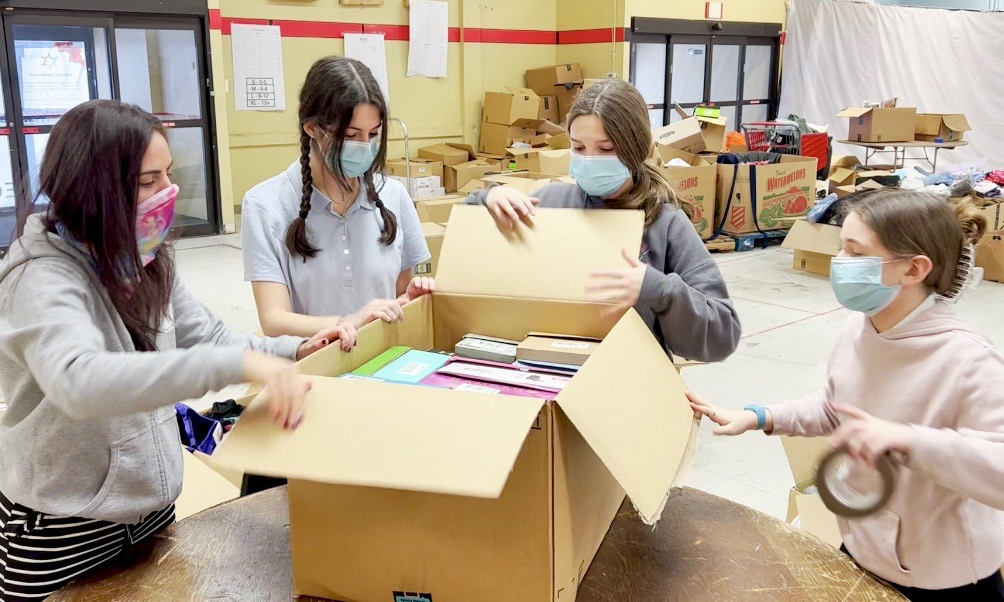 The group set out early Sunday morning, Dec. 19 from the school parking lot — a 16-hour drive away — and returned Dec. 22. During their three intensive days in Kentucky, the group witnessed scenes that even Lassner, a EMT with 36 years of experience, including 32 with Upper East Side Hatzolah in Manhattan, had never seen.

“I have done hurricanes, 9/11, Sully in the river (pilot Chesley “Sully” Sullenberger’s emergency landing in New York’s Hudson River) — [the Kentucky trip] is the first time I have ever seen people who had nothing. The concept of people having absolutely nothing is mind-blowing. We talk about it a lot with the students,” Lassner says.

Upon arrival Sunday night, the group had dinner and got a good night’s sleep for the anticipated physically and emotionally exhausting day ahead.

On Monday morning, the delegation set out for the Project Friendship Warehouse, a division of Chabad of Kentucky, to help Rabbi Avrohom Litvin (co-director with his wife, Goldie) as well as sons Rabbi Chaim and Rabbi Mendel separate various items for distribution.

But they were confused. When they first entered, they saw an empty room with decorations, a curtain and some boxes. They expected it to be filled with hundreds of boxes. After completing the separation of items from the few boxes in the room, they learned that the curtain was simply a mechitza (room divider) erected for a recent bat mitzvah. As they stepped behind the curtain, they encountered a warehouse they described as “as large as a football stadium,” filled with hundreds of pallets of donated items. The 12 shrink-wrapped boxes on each pallet were each filled with an assortment of items including toothbrushes, toys, clothing, food, shoes, socks, picture frames and jewelry.

The team mobilized. In assembly-line fashion, they opened and sorted boxes of clothing ranging from infant size to 4XL. As the group organized the gowns, suits, pants, coats, socks, shoes and more, Ms. E was struck by the magnitude of the loss the local residents had experienced just 10 days earlier.

“The concept of having everything you own destroyed in seconds and remaining with nothing was a difficult idea to understand and one that we continually discussed throughout the day,” she says. “We felt very accomplished after our six-plus hours of teamwork that proved to be very meaningful and hopeful.”

Lassner was moved by the hard work, dedication and modesty of the Chabad team. “Working with Project Friendship and Rabbis Litvin was moving,” she says. “They were the epitome of say little and do much.  I was so thrilled that we had them as mentors and examples.”

On Tuesday morning, the group had their first experience with the local Amish community. They set out for Oak Grove with five dozen black boots from Project Friendship. The 70 men in this community had come to rebuild the local lumber store and warehouse which had been destroyed.

As the group moved through the region, they were struck by what they witnessed.

The students next met Dave, who they describe as the chief tornado expert in Kentucky and a tornado spotter. They viewed his 10 weather and tornado-spotting monitors as well as other special equipment, and learned how Dave and the other volunteers actually spot tornados.

The group’s sorting work continued — this time at the Kentucky Weather Operations Center and the adjacent warehouse. They were asked by the Kentucky Office of Emergency Management Coordinator to separate various clothing and food items and distribute to people in need.

“The word ‘nothing’ took on new meaning when a local sheriff came in to pick up clothing and food for a family that was in a neighbor’s house as they had lost everything in their home,” notes Mrs. E. “The officer came in to get as much as he could to give these people that had nothing.  It was very moving to see that some of the food that we had helped separate just minutes before was taken for their immediate use. You never understand the meaning of nothing until you see it.” Dave (black shirt) the Tornado expert for the region, with the NSHA Team at the Tornado and Weather Operations Center.. Credit: Courtesy.

As the students were about to depart, they had an unexpected lesson about the Jewish concept of teshuva (repentance). They were about to present Amazon gift cards to thank their fellow volunteers.  Dave then informed them that these “volunteers” were not eligible to receive these gifts — they were inmates from the local correctional facility. Jeremy reports, “Several of us were surprised in a wonderful way. We learned that people can make mistakes, regret what they did and do something to change their lives to better themselves and the world.”

The students closed out their stay by praying Mincha and Maariv, eating dinner and experiencing a farbrengen (joyous Hasidic gathering) with Rabbi Avraham Litvin.

The parents were impressed by what their children had accomplished. Rachel Spinner says proudly, “At first, I thought my daughter was too young to make this kind of trip. What kind of 12-year-old would be up for a 15-plus hour van ride? I was unsure if she’d be able to handle the long drive and the potential emotional hurdles she’d have to face. But I trusted Mr. Lassner and Ms. E so if they were in, I was in. Although our daughter came home exhausted, she was invigorated at the same time. I am so grateful to NSHA for providing her with this experience that will stay with her always.”