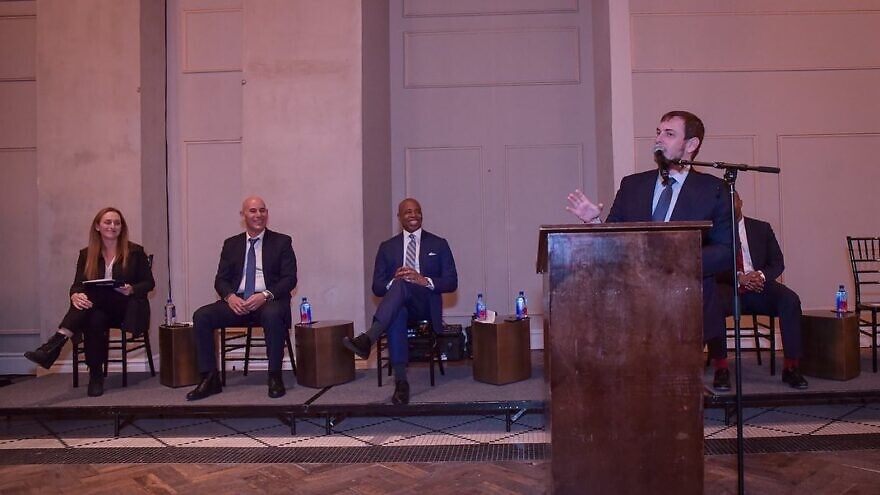 (March 16, 2022 / JNS) Through two years of the COVID-19 pandemic, New York-based Israeli companies remained almost singularly resilient and thriving. As the Big Apple awakens and begins its long-awaited, full-fledged return to the office, a new initiative looks to tie the city’s future together with that of Israel.

To that end, the new Israel-NYC Chamber of Commerce held its launch events last week, jointly hosted with the Government of Israel Economic Mission to the U.S. East Coast and the BIRD Foundation.

The participation of Adams, who has billed himself as a pro-Israel mayor and relied heavily on the Jewish vote during his election, so early in his tenure was noticeable. He stayed for the duration of the program.

“He attended. I think that, in itself, is a very, very strong statement,” Anat Katz, Minister for Economic and Trade Affairs in North America, told JNS. “The fact that he attended and his CTO (Chief Technology Officer Matthew Fraser) attended really shows where he’s headed.”

“Furthermore, listening to his comments, I think that he really embraces this relationship. We would like to identify joint paths to see again how we can contribute to New York with the Israeli business ecosystem,” she said. “Currently, there are over 400 Israeli companies in New York City, and they leverage all the opportunities that exist in New York. We feel that they contribute significantly to the tech and innovation scene of New York, helping to develop solutions that address the needs of the city.

“This is basically the vision. And my impression is that the mayor would welcome this,” said Katz.

‘More ways that people can work together’

Adams heard from a pair of tech companies: Brooklyn’s EasyAerial and Israel’s BWR Robotics, which shared their collaboration story. The specialized drone developed jointly by the two companies is used by the New York Fire Department to track fires and support early response. The cooperative effort was funded by the BIRD Foundation (Binational Industrial Research and Development Foundation), a bilateral program between the American and Israeli governments that provides up to $1 million in matching funding for joint research and development projects between American and Israeli companies.

The partnership is indicative of the efforts that thrived during the pandemic, and of the opportunities for further New York-Israel collaboration as the city emerges. New York is home to more than 20 unicorns—privately held startups valued at $1 billion—with 10 achieving that status during the peak of COVID-19.

“First of all, the fact that we can start meeting in person—there’s something to be said for face to face. I think that is really energizing people, and bringing more ideas and more ways that people can work together,” Andrea Yonah, BIRD’s Director of Business Development, East Coast & Midwest, told JNS.

“This particular event comes in conjunction with our latest funding cycle with a call for proposals dealing with homeland security, and there’s funding for it through the U.S. Department of Homeland Security and the Israeli Ministry of Public Security. But after this, we’re going to have events on different themes. We’re looking at themes like food tech and health care, construction and fintech. In each of these events, we’re going to have companies and stakeholders from the New York City side, and companies from both the United States and Israel, especially those Israeli companies that are already here in New York City and the region. And from some of those events, there were surely come benefit to all,” said Yonah.

The launch of the chamber, founded by Heritage Equity Partners CEO Toby Moskovits and Williamsburg Hotel Director of Business Development Rifka Buls, is seen by those involved as a jumping-off point for post-pandemic collaboration in a number of fields critical to New York’s recovery.

“We’re certainly seeing a big rebound. In the coming two months, we plan to have an incoming Israeli food-tech delegation and incoming fintech delegation to New York City, and an outgoing cyber delegation for the Cyber Week in Israel. These in-person events strengthen the ties between the Israel business and tech ecosystem, and the New York ecosystem,” explained Katz, noting that Malka’s most recent visit to the area was met with enthusiasm from U.S. investors and venture capitalists. “And I can tell you that people are extremely excited on both ends to partner, to work together and to see how they can identify a way forward.”