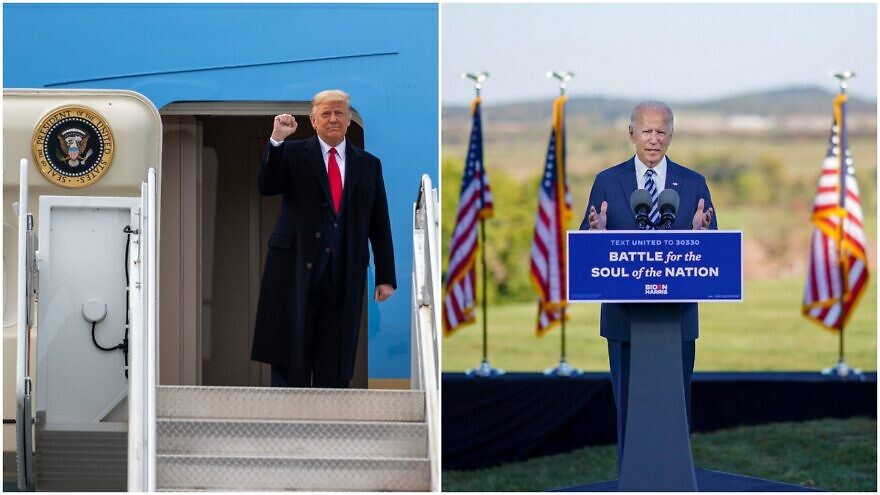 (October 27, 2020 / JNS) With election day a week away and early voting in full force throughout the country, U.S President Donald Trump and former U.S. Vice President and Democratic presidential candidate Joe Biden, and their surrogates, have been upping their presence on the campaign trail. The Jewish outreach effort, albeit limited and mostly online due to the coronavirus pandemic, is no exception.

Aaron Keyak, who was tapped in July as the director of Jewish outreach for the Biden campaign, told JNS that the campaign has been “constantly doing more calls and events.”

He noted that the campaign’s Jewish outreach effort has included “half a dozen or so events” with Democratic vice-presidential nominee, California Sen. Kamala Harris, and her husband, Doug Emhoff, who is Jewish, in states such as Florida, Pennsylvania, Ohio and Virginia.

“When it comes to the Jewish community, there are sizable populations in Florida, Pennsylvania, Ohio and Michigan. But there’s also a significant Jewish population in Arizona, Colorado and Nevada,” noted Keyak. “Obviously, we wish we were campaigning under normal circumstances, but when you’re campaigning virtually, you’re able to do these events throughout the country back-to-back in various states. That’s what we’re doing.”

He said, “as far as our principals, we’re available to talk to the Jewish community and our allies on the Hill, not to mention our policy experts like Tony Blinken, Jake Sullivan or any of the various members of Joe Biden’s teams. We’ve been out there engaging with voters.”

However, “while the official coalition was launched the day after the Abraham Accords were signed, we had been having events geared throughout the Jewish community, including back in May, when we commemorated the second anniversary of the move of the U.S. embassy to Jerusalem,” Boris Epshteyn, a strategic adviser and the point person for Jewish outreach for Trump’s campaign, told JNS. “So the campaign has been focusing on outreach to the Jewish community throughout its time.”

“Obviously, we wish we were campaigning under normal circumstances.”

Although Jewish political groups, including the Republican Jewish Coalition and Jewish Democratic Council of America, have been campaigning for their candidate, including holding virtual events with surrogates from the campaigns they support, they have been doing so independently of the campaigns since it’s against federal campaign finance laws for federal candidate campaigns to work with groups that have a super PAC. Like Democratic Majority for Israel, RJC and JDCA each has a super PAC.

While none of the aforementioned groups have held an in-person event this year with their preferred candidate, J Street hosted a virtual reception for its endorsed candidate, Biden, in September.

Heading into the final days of the election, campaign surrogates and voters see differing qualities and priorities in informing their decision to support the candidates.

“What you will see in contrast to the current administration is a condemnation of the environment that allows division and bigotry and anti-Semitism to take root and grow,” he said.

Leib cited the president’s executive order on combating anti-Semitism, calling it “a bold decision.” He also called on the U.S. Jewish community to “take a non-emotional and objective look at what President Trump has done for our community in America, Israel and around the world.”

Ezra Jaffe of Skokie, Ill., who identified himself as a left-leaning Republican “and strong supporter of Israel,” told JNS that despite agreeing with some of the president’s policies, including on Israel and China, “I have never trusted President Trump from even before he campaigned for president, and he has not done anything to change my view. His personality and leadership style do not instill confidence domestically or internationally. For those reasons, I will be voting for Joe Biden.”

Raeefa Shams, an Independent in Washington, D.C., told JNS, “I believe that Jews and other minorities, and really all Americans, thrive when our leaders respect our country’s laws, institutions and longstanding norms, celebrate our diversity and promote unity over division. I think Joe Biden has embraced those qualities over his long political career.”

“When it comes to the Jewish community, there are sizable populations in Florida, Pennsylvania, Ohio and Michigan.”

Yechezkel Moskowitz, a board member of “Jewish Voices for Trump” who lives in New York, said the president will continue to nominate justices to the U.S. Supreme Court—like Amy Coney Barrett, who was just sworn in on Monday night—who are pro-religious freedom and pro-free speech, and continue to push forth a school-choice agenda to encourage Jewish families to choose a day-school education for their children, even though tuition remains an obstacle for many families.

Moskowitz also noted that if Trump were to be re-elected, more Mideast countries will follow the lead of the United Arab Emirates, Bahrain and Sudan to normalize ties with Israel, and that doing so would “affect Jews in America because a safe Israel is good for America.”

Increased foreign relations in the Middle East, he said, “will continue to help foster the additional evolution of the American-Israeli relationship, as I believe it also impacts anti-Semitism in this country, both on the left and on the right.”

Kayla Gubov, vice chairman of the group Young Jewish Conservatives, told JNS that the Abraham Accords and Sudan agreeing to normalize ties with Israel “marks a new era in the history of the Jewish people.”

“Jews for thousands of years have prayed for peace among all nations,” she said, “and it seems that President Trump is fulfilling that prayer in real time.”