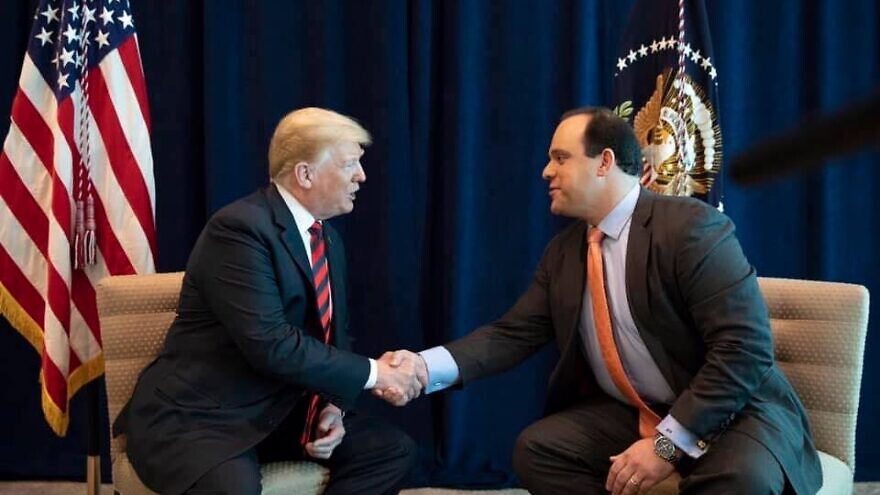 (October 14, 2020 / JNS) Boris Epshteyn, a strategic advisor for U.S. President Donald Trump’s 2020 campaign, has been the campaign’s point person for Jewish outreach for a while now, though the “Jewish Voices for Trump” coalition only launched in September.

Lately, he has repeatedly called for his counterpart on the campaign of Democratic presidential nominee Joe Biden, Aaron Keyak, to debate him. However, the Biden campaign told JNS last month that Keyak will not do so.

JNS talked with Epshteyn by phone on Oct. 7. The interview has been edited for brevity and clarity.

Q: Can you describe your background, especially where you are from and how your identity plays a role in the re-election campaign for U.S. President Donald Trump?

A: I’m originally from the former Soviet Union; I came here in 1993 from Moscow. We were Jewish refugees. I worked on the John McCain campaign, was a surrogate on the Mitt Romney campaign, then I was a supporter, then a surrogate and then senior advisor overseeing surrogate messaging on the 2016 Trump campaign. I was communications director for the inauguration, assistant communications director at the White House. I was the chief political commentator at Sinclair Broadcast Group, and now I’m the strategic advisor at the Trump campaign, and I’m the co-chair of “Jewish Voices for Trump.”

In terms of my Jewish background, it’s obviously extremely important to me, and I’m proud to be the point person for Jewish outreach for the Trump campaign and make it clear he is the most pro-Israel president in the history of this country. It’s definitely been promises made, promises kept.

On the international front and domestically, the president has fought anti-Semitism everywhere and anywhere. He’s enabled federal agencies to combat anti-Semitism as a hate crime. He has fought anti-Semitism on college campuses, classifying it as a violation of a hate crime under Title VI of the 1964 Civil Rights Act. We just saw the first settlement under such auspices between New York University and the U.S. Department of Education. The president also signed the 2017 JUST Act. He also signed the Never Again Education Act, which provides $10 million for education on the Holocaust for our younger generations.

Q: Why was the Jewish outreach effort only launched last month?

A: To be fair, while the official coalition was launched the day after the Abraham Accords were signed, we had been having events geared throughout the Jewish community, including back in May, when we commemorated the second anniversary of the move of the U.S. embassy to Jerusalem. So the campaign has been focusing on outreach to the Jewish community throughout its time. Meanwhile, we’ve put together the advisory board and did all the logistics around that. We rolled that out in September. But our outreach has been in place throughout the campaign and definitely throughout this year.

Q: Why didn’t the president condemn white nationalists during the first presidential debate?

Q: He said he was willing to, but didn’t actually do so.

If anybody out there thinks the president of the United States—he has a Jewish daughter, Jewish grandchildren, Jewish son-in-law, has had Jewish people surrounding him throughout his career in business and now has had Jewish people surrounding him in senior positions in his administration—is anything close to anti-Semitic, they’re absolutely kidding themselves. All they have to do is look at the facts.

Q: Most Jews vote Democratic and place numerous issues above that of the U.S.-Israel relationship. How can the Trump campaign increase its share of the Jewish vote? And how can it appeal to voters who like Trump’s pro-Israel accomplishments, but don’t like his temperament?

A: In terms of increasing the percentage, we’ve actually seen that improvement. The president got roughly 25 percent in 2016. He’s polling at 30 percent right now, and I do think there’s a hidden Trump voter in there—probably 5 percent to 10 percent—so I think the numbers are even better than that. If you look at Joe Biden, he’s way below what Hillary Clinton was in 2016. He’s coming in at about 67 percent right now, and if that were to hold through Election Day, it would be the lowest for any Democratic presidential candidate since Michael Dukakis in 1988, and we all know how that turned out.

So Jewish voters are moving towards President Trump. I think that’s going to continue, and I think the keys to do that are through events and discussions.

Q: What would a second Trump term mean for the Jewish community?

Q: If he wins a second term, how does the president plan to address growing anti-Semitism in the United States, not only on the far-left but also on the far-right?

Q: In three sentences: Why should Jewish and pro-Israel voters cast their vote for Trump?