With the annual commemoration of David Ben-Gurion Day on Nov. 14 (the sixth of Kislev) marking 45 years since his death, why is it still important to reflect on the vision of Israel’s first leader and worldly statesman? 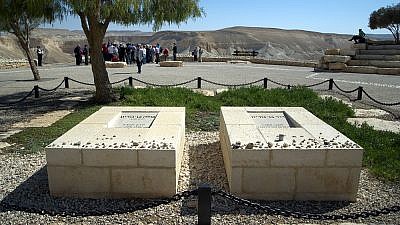 The graves of first Israeli Prime Minister David Ben-Gurion, and his wife, Paula, near their residence in Sde Boker in the Negev Desert. Credit: David Shankbone/Wikimedia Commons.

Because his prophetic words, “It is in the Negev where the creativity and pioneering vigor of Israel shall be tested,” are being realized today.

The Negev, anchored by Ben-Gurion University (BGU) of the Negev in Beersheva, is the geographical center of Israel and is, by most accounts, uncontested land.

Moreover, this region—once a vast desert—currently represents a Zionist rebirth of Israeli pioneering: university scientists, farmers, entrepreneurs, new immigrants and an ever-growing presence of the Israel Defense Forces are working to secure Israel’s future. This is Ben-Gurion’s Zionism transplanted and reinvigorated in the 21st century.

Through word and deed, Ben-Gurion spearheaded the nation’s commitment to the region. When he retired from public life, he served as a personal role model by moving to Kibbutz Sde Boker, a small agricultural community 30 miles south of Beersheva.

Rainfall is scarce in the Negev. In the past, its presence was cause for celebration. Every tree, crop and field was a hard-fought victory, and every drop of water was precious. Ben-Gurion envisioned Jewish Israeli research scientists desalinating the sea and harnessing energy from the sun long before both were a possibility, never mind a reality.

Today, desalination technology developed at BGU is producing a surplus of water for Israel, quenching a parched California and even helping neighboring Arab and African countries where water shortages decimate food supplies and create civil upheaval. In fact, Israel is now the only country in the world that is actually shrinking its drylands due to an unparalleled expertise in water research and technology that is making the desert bloom.

Ben-Gurion’s vision of Zionism underscores how crucial science, education and a moral compass are for the Jewish state—not just for its survival, but to be a light among nations. “The State of Israel will prove itself not by material wealth, not by military might or technical achievement, but by its moral character and human values,” said Ben-Gurion.

To that end, 21st-century Zionism in the Negev is also about tikkun olam (repairing the world) through community service and outreach. Beersheva has absorbed many of the olim (new immigrants) who resettled in Israel. Ben-Gurion University not only shares the late prime minister’s name, but also his vision. Many of its students volunteer to live among these families to serve as mentors as part of a community outreach program run by the university.

BGU’s medical school was the first in the world to train doctors to treat the patient holistically and to focus on underserved communities in Israel, in the United States and globally—a model that is widely emulated today. And Israeli environmental research students work in African villages to provide low-tech solutions for farming, irrigation, soil management and safe drinking water without electricity.

The IDF is moving its elite intelligence groups, including the prestigious 8200 Intelligence Unit, to a high-tech campus adjacent to the university that was once an arid field of dirt and sand. It’s part of an innovation ecosystem that involves a unique collaboration between academia, industry, government and the IDF.

The BGU campus will soon double in size to meet the needs of this unprecedented growth in the region.

The city of Beersheva has become the cyber-security capital of Israel, thanks to BGU. And, global companies are now setting their sights on the Negev to acquire technology and invest in start-up innovations. All this is proof that Israel not only has a right to exist, but has been proven to add great (and global) value through its existence. The world is simply better off because Israel is in it.

“The difficult we do first; the impossible takes a little longer,” Ben-Gurion famously said. His vision in the past—of impossible circumstances overcome—is a Zionist vision we can embrace on his memorial day and every day. His dream transcends politics and conflict. It’s a clarion call we can all rally around.