(August 16, 2022 / JNS) The families of the Israeli athletes massacred at the 1972 Munich Olympics have announced a boycott of an upcoming 50th-anniversary commemoration in Germany. They’re protesting the inadequate level of compensation provided by the German government, and I fully support their position.

But let’s not forget that one of the masterminds of the massacre heads a regime that is currently receiving hundreds of millions of dollars in direct and indirect aid each year from the United States, Germany and numerous other countries.

I am referring to Mahmoud Abbas, the chairman of both the Palestinian Authority and its main faction, Fatah.

The autobiography of the late Mohammed Oudeh, better known as Abu Daoud, named Abbas as one of the three senior officials of Fatah who assisted Daoud in planning the Munich massacre.

Officially, the Munich attack was carried out by the “Black September” group that pretended to be independent of Fatah. 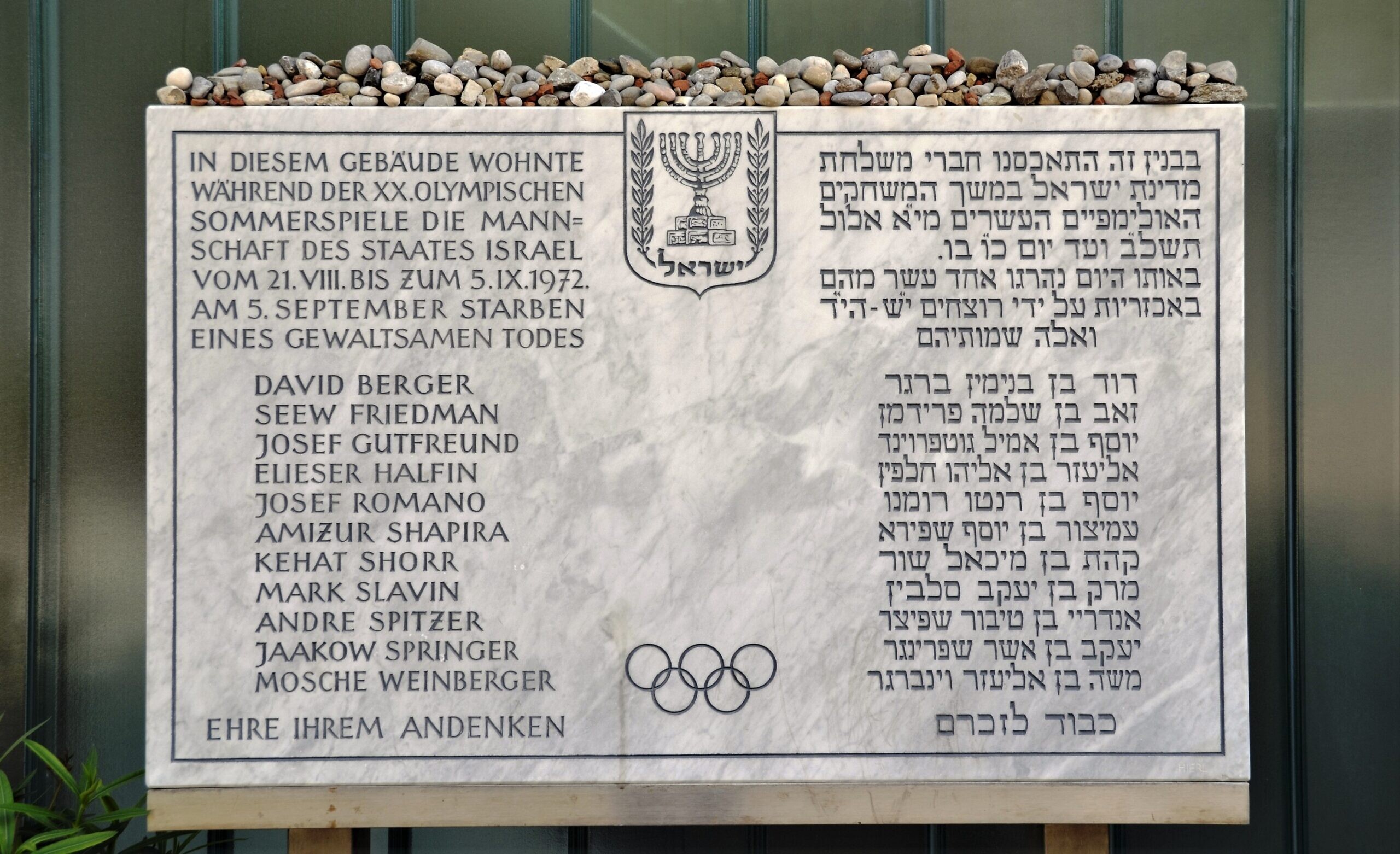 A plaque in front of the Israeli athletes’ quarters commemorating the victims of the 1972 Munich Olympics massacre reads, in German and Hebrew: “The team of the State of Israel lived in this building during the 20th Olympic Summer Games from 21 August to 5 September 1972. On 5 September, [list of victims] died a violent death. Honor to their memory.” Credit: Wikimedia Commons.
But the myth of an “independent” Black September was shattered many years ago with the declassifying of a telegram sent by the U.S. State Department to American embassies around the world on March 13, 1973.

The text of the telegram is widely available on the Internet. It reveals the harsh truth about the Munich murderers. You can see it here:

“Question of link between Black September Organization (BSO) and Fatah has been subject of much public discussion,” the telegram begins. Then it explains Arafat’s lies about his role in Black September: “Fatah leader Arafat has disavowed connection with BSO. … Arafat continues to disavow publicly any connection between Fatah and terrorist operations. Similarly, Fatah maintains its pretense of moderation … .”

The truth about Black September and Fatah was exactly the opposite of what Arafat claimed, according to the U.S. State Department telegram: “USG [United States Government [has information that Fatah is in fact parent body of BSO. … The Black September Organization is a cover term for Fatah’s terrorist operations executed by Fatah’s intelligence organization. … For all intents and purposes no significant distinction now can be made between the BSO and Fatah.”

So “Black September” was a fiction—so says our own State Department. Fatah, under the leadership of Arafat and Abbas, was the “parent body” of Black September. Meaning that Fatah was responsible for the Munich massacre.

And yet countries around the world, led by the United States, are lining up to give Abbas astronomical sums of money. The Biden administration is currently providing the Palestinian Arabs with more than $500 million annually.

The fact that some of the money is provided indirectly, through various U.N. agencies and other third parties, is just a technicality. Such funding is fungible. It frees up the P.A. from having to pay for services and goods that it would otherwise have to pay for.

It is often forgotten that one of the Israeli athletes who was murdered at the Munich Olympics was Cleveland native David Berger, a dual American-Israeli citizen. That makes it even more outrageous that American taxpayers are underwriting a regime headed by one of the terrorists responsible for the murder of an American citizen.

By all means, let’s insist that the German government pay appropriate compensation to the families of the victims. But let’s not lose sight of the incredibly hypocrisy of governments that shed crocodile tears over the Munich massacre, and then send hundreds of millions of dollars to a man who helped perpetrate it.

Stephen M. Flatow is an attorney and the father of Alisa Flatow, who was murdered in an Iranian-sponsored Palestinian terrorist attack in 1995. He is the author of “A Father’s Story: My Fight for Justice Against Iranian Terrorism.”