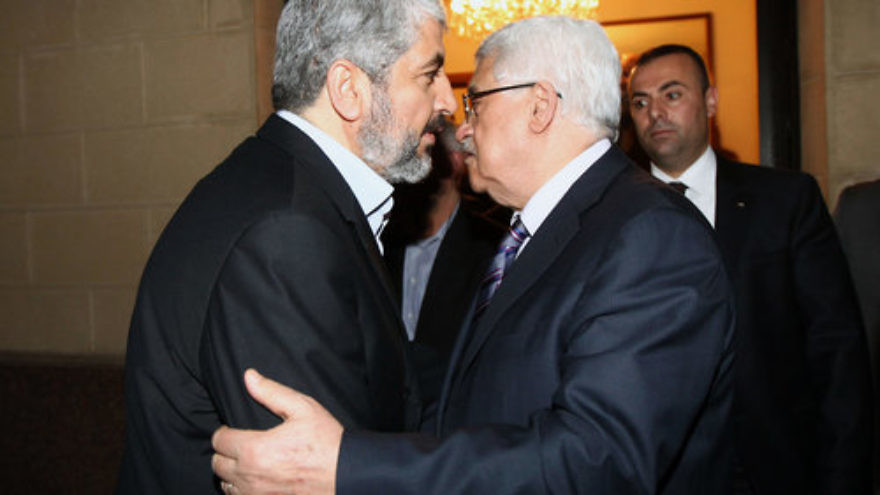 (October 18, 2017 / JNS) The Gaza-controlling Hamas terror group’s recent decision to sign a unity deal with the Palestinian Authority’s (PA) ruling Fatah party may have been motivated by more than just a desire to reconcile after years of bitter rivalry.

A cunning plan to pave the way for senior Hamas leader Khaled Mashaal to win the PA presidency could be the true aim of the terrorist organization’s willingness to compromise.

This new information was confirmed by senior Palestinian officials as well as Egyptian intelligence officials involved in mediation between the rival factions. These sources told Israel Hayom that one of Hamas’s principal aims in the agreement was to replace aging PA President Mahmoud Abbas, 82, with Mashaal, 61, the former head of Hamas’s “political bureau.”

Mashaal was Hamas’s political chief for almost two decades and is still considered the strongest member of the terror group. Senior Palestinian officials told Israel Hayom that despite recently resigning as Hamas’s political leader and being replaced by Ismail Haniyeh, Mashaal has made no effort to disguise his ambition to clinch the coveted PA presidency.

In private conversations, Mashaal reportedly told his companions he would back significant reforms to the Hamas charter to allow the organization to join Palestine Liberation Organization (PLO) institutions—a move that would allow a Hamas candidate to compete in PA presidential elections.

According to the Palestinian and Egyptian officials, one of the main articles in the Palestinian reconciliation agreement deals with the option for significant reforms to both the PLO and Hamas—namely, measures allowing Hamas to join the PLO. This move would pave the way for Mashaal to declare his candidacy.

According to an Egyptian official involved in obtaining understandings that led to the agreement between the sides, both Hamas and Fatah approved the terror group joining the PLO in principle through reforms, on the condition Hamas would implement the reconciliation deal.

Currently, Mashaal is not serving in any executive role for Hamas, instead functioning mainly as an honorary ambassador for the terror group in Arab countries.

“Mashaal saw an opportunity to realize his ambition of inheriting the Palestinian presidential seat because of the rift in the Fatah leadership after Marwan Barghouti’s imprisonment in Israel, and the fact that polls conducted by Palestinian bodies show a dramatic drop in the support for Barghouti as Abbas’s successor. Additionally, Abbas is in no rush to groom a successor,” a senior Egyptian official told Israel Hayom.

“Abbas is very old and not in good health. Barghouti enjoys the support of the Palestinian streets as long as he is imprisoned in Israel,” the official said, adding Mashaal “enjoys a very high level of support and popularity from the Palestinian public both in Gaza and in the West Bank…The intra-Palestinian reconciliation deal, as far as Mashaal is concerned, is certainly the first step toward realizing his aspiration of succeeding Abbas.”

“This is a window of opportunity that will not likely return,” he said. “In Fatah, however, they are not happy with Mashaal’s aspirations of being president of Palestine in the future, even though we received a message through Egyptian mediators that Fatah will not stop attempts to strike a reconciliation deal just because of Mashaal’s future ambitions.”

A source in the Fatah Central Committee told Israel Hayom Mashaal’s aspirations “are clear and known to us, but the road is still long. This certainly enraged many officials in the PLO and Fatah, but we will deal with this issue when we have to.”

The Israeli government, meanwhile, announced Tuesday it would not engage in diplomatic negotiations with the current Palestinian unity government due to Hamas’s involvement. According to the Prime Minister’s Office, Israel will not conduct negotiations as long as Hamas does not recognize Israel, disarm and renounce terrorism. Israel also called on Hamas to sever ties with Iran, one of its top patrons.

At the same time, Israeli Education Minister Naftali Bennett, a member of the country’s security cabinet, said the Jewish state’s security coordination with the PA should continue despite the Fatah-Hamas pact.

“I support the continuation of security coordination over Judea and Samaria—it’s good for us and good for them (the PA),” Bennett told Army Radio.