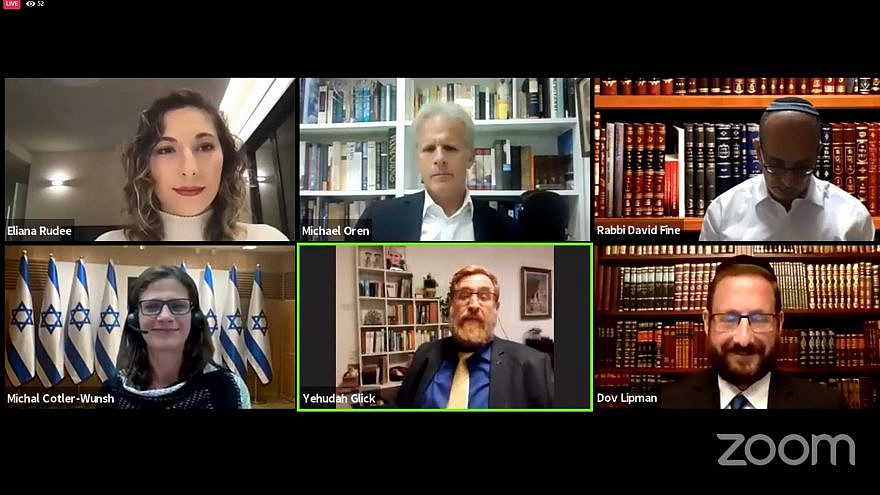 (January 13, 2021 / JNS) Should Jews living in the Diaspora have a say in decisions made in Israel’s Knesset? Do Israel’s members of Knesset understand the importance of including the voice of Anglos living in Israel?

These were some of the questions discussed on Tuesday during a JNS panel featuring Israel’s English-speaking parliamentarians, including Knesset member Michal Cotler-Wunsh, and former Knesset members Dov Lipman, Yehuda Glick and former ambassador Michael Oren, and hosted by JNS Jerusalem correspondent Eliana Rudee.

Anglo-Israelis, or simply Anglos, refer to any native English speaker living Israel, primarily from North America, the United Kingdom and Australia. According to Anglo Vision, around 250,000 Anglos live in Israel—a figure that includes first and second generations.

Cotler-Wunsh called for the empowerment of Anglos who moved to Israel “for the sake of the entire Israeli public, for Israel’s future, for the sake of what our role is. As Anglo representatives in the Knesset, we have a responsibility for leading, forming discussions and challenging the paradigms in all of the Knesset’s work. The issues that unite us are far greater than those that differentiate us.”

She referred to the Anglo community in Israel as a “force to be reckoned with” and recognized “the tremendous strength in numbers” Anglos have “for the sake of the 72-year-old miracle that is Israel.”

Oren said that when he entered the Knesset, he faced “a sartorial barrier.”

He said he decided to show respect by always wearing a suit and tie—a cultural and cultured gesture alien to some of the other non-Anglo members of Knesset.

“Anglos bring a certain sensibility and also a bit of memory,” said Oren. “We come from societies that come from 800 years of the development of democracy since the Magna Carta. Israeli Knesset members have a narrow idea of what they mean when they speak of democracy.”

“Anglos have so much to contribute,” he added, emphasizing that one of the major ways to define Zionism is through responsibility.

“To what degree does Israel take responsibility for its self-proclaimed role as the nation-state of the Jewish people?” he asked. “Are we responsible for Jews who move here? For Jewish continuity? It is our responsibility.”

By alienating Anglo Jews in Israel, Israel endangers its own safety because they contribute a large portion to the economy, said Oren, half-joking that it is roughly equivalent to its defense budget.

“It is our responsibility as Zionists, Israelis, as Jews who live in this land,” he said.

‘A greater say at the decision-maker’s table’

David Fine, the founder of the Anglo-Vision, a group of English-speaking Israelis who seek to coalesce their community around a vision of unifying positions that can affect change, development and progress, raised the question of how to unite this community.

In the first-ever poll of Anglo-Israeli voters, Fine discovered that most feel they are part of an Anglo community in Israel.

Significantly, the poll showed that Anglos vote for issues and policies, rather than ideology. The top issues Anglos are interested in are economy, social welfare, health care and education.

“It gives us great hope that we can uplift the Anglo community and have a greater say at the decision-maker’s table,” said Fine. “We all agree on so much more than what divides us. If we vote on policies as opposed to ideologies, we will find we can unite around these principles.”

Lipman said that when he entered the 19th Knesset as a member of the Yesh Atid Party, he feared that he would be seen as an outsider.

But he said he found “very quickly” that he was “admired” by colleagues for making aliyah in the first place, and in so doing, brought fresh energy to the Knesset in helping to define what Zionism is about.

He said being an Anglo in the Knesset was an “asset,” partially highlighted by his being awarded the work ethic prize for always showing up to vote—a devotion to protocol, he noted, that is clearly foreign to many Israeli Knesset members.

He emphasized that “there are issues we can work on and make a difference,” and that one doesn’t need to be a parliamentarian to do so.

“Community-level involvement is sufficient,” he said, advising future activists not to be afraid if they don’t speak fluent Hebrew.

“The culture is hard,” he admitted. “You have to find your way.”

‘Drawing a line between security and Jewish peoplehood issues’

Another question that has grown in recent years is the role Diaspora Jews should play in decision-making in Israel.

Lipman said he often jokes that Diaspora Jews “are always welcome to move here” if they want involvement in Israel’s decision-making, “but it is wrong to say they do not have a voice.”

He said he “draws a line” between security and Jewish peoplehood issues.

“We need to work on getting Israeli leaders to hear those voices and understand that the decisions we make here have real-life implications for young Anglos who love Israel,” he said, adding that “we need to do a better job making all Jews feel comfortable here.”

“Israel is the saving grace for Jews around the world,” affirmed Lipman. “It is the one thing that unites Jews in the Diaspora.”

Glick spoke of his experience when he became a Knesset member and recalled the attitude of some of the other MKs who advised him to highlight the differences between him and the rest.

“The idea of inclusiveness is foreign to the Knesset,” he lamented. “The education I received in an Anglo home was different.”

Glick also said that Israel’s relationship with Jews in the Diaspora “is very much ignored.”

He called for the inclusion of more Anglos in Israeli politics, and while he wouldn’t want to see a separate Anglo party, he said he would want to see more Anglos entering the Knesset.

“We should find a way for Diaspora Jewry to be heard,” he concluded. “The ability to directly correspond with American Jewry is crucial.”

With regard to legislation in Israel’s Knesset, whether on religious issues, prayer at the Western Wall or communal issues, Glick also pointed out that “we need to take Diaspora Jewry into account.”

Cotler-Wunsh agreed with Oren and the rest, adding that Israel must understand its responsibility for Jews living not only in Israel but everywhere.

“It is imperative we engage with the Diaspora community perhaps to change the paradigm. It is long overdue to discuss what the new relationship should look like.”

“We need to engage,” she said. “Every decision we make here affects Jews around the world.”