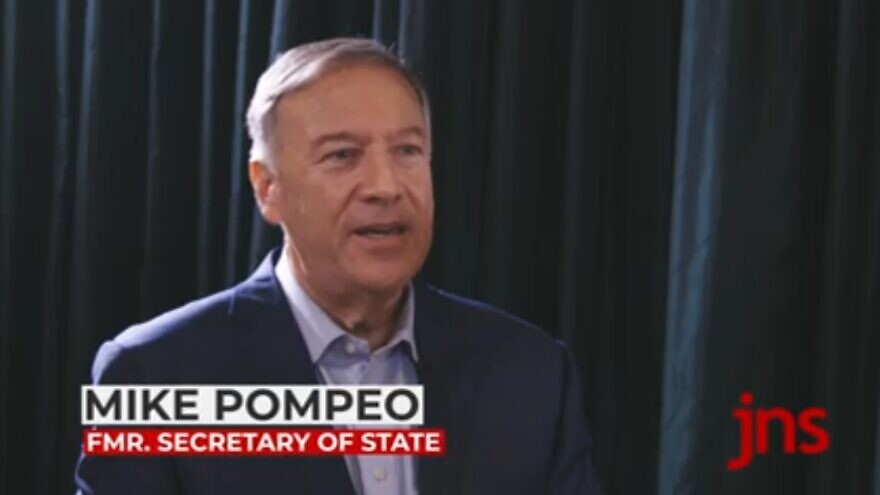 (November 11, 2021 / JNS) Former U.S. Secretary of State Mike Pompeo believes that Israel has the “duty” to defend itself from Iran if Tehran takes actions that threaten Israel absent U.S. support.

“If the United States is not with Israel and the Iranians begin to take actions that threaten Israel, Israel not only has the right but the duty to defend itself,” Pompeo told JNS as part of an exclusive interview for “Global Perspectives with Ellie Cohanim” on the sidelines of the Republican Jewish Coalition conference last weekend in Las Vegas.

Pompeo, who was elaborating on comments he made last month that Israel may have to attack Iran on its own due to “U.S. appeasement,” said that the partnership with Israel is critical for America and that any gaps can put the Israeli leadership in a difficult position.

“We should be helping Israelis keep themselves safe and their country secure,” said Pompeo. “When there’s a gap real, perceived for both, it puts the Israeli leadership in a very difficult position, and we should never force Israeli leadership to be in that place.”

The former secretary of state’s comments come as Israel has become increasingly alarmed over the Biden administration’s push to re-enter the 2015 Iran nuclear deal, which the Trump administration withdrew from in 2018.

Israeli Prime Minister Naftali Bennett has said that Israel “will do what we need to do” to prevent a nuclear Iran, a recent address to the group United Against Nuclear Iran, as reported in The Jerusalem Post.

“Iran poses a strategic threat to the world and an existential threat to Israel, and [it] ought not to be allowed to get away with it,” said Bennett.

Israel Defense Forces’ Chief of Staff Lt. Gen. Aviv Kochavi told Israeli lawmakers this week that the Israeli military is ramping up its preparations for a possible attack on Iranian nuclear facilities.

Kochavi told the Knesset Foreign Affairs and Defense Committee that the IDF “is accelerating operational planning and preparedness to deal with Iran and the military nuclear threat. Thankfully, the budget that was approved [last week] makes it possible to contend with a variety of threats.”

Talks on reviving the Iranian nuclear deal is set to resume on Nov. 29 in Vienna. Still, the Biden administration has expressed impatience with Iran and has suggested it has been looking at “other options.”

Negotiations between Iran and six powers, including the United States, wrapped up in June, and no date had been set for a seventh round of talks until now. They had been put on hold until after the Iranian presidential election on June 18, which ushered in hardline candidate Ebrahim Raisi.

“It’s really dangerous what the administration is doing with Iran. They will, if they head back into that deal, provide resources and money for a regime that has made clear its intentions,” said Pompeo, adding that leaders of the Islamic Republic aims “to wipe Israel off the face of the earth. They want to destroy America as well.”

“It’s been fascinating in the last few weeks to watch [foreign-policy officials] as the Iranians have rejected their outstretched hand repeatedly to watch them come to see that this is a regime that has intention of stopping its nuclear program,” added Pompeo.

Indeed, Iran has continued to ramp up its nuclear program. Last week, Iran said it had almost doubled its stock of enriched uranium in less than a month, while the International Atomic Energy Agency has said its oversight capabilities in Iran are being weakened. Iran has enriched uranium up to 60 percent, which is a short gap from weapons-grade 90 percent. Under the nuclear deal, Iran was barred from enriching above 3.67 percent.

Pompeo said that the United States needs to stand with Israel against the threat of Iran.

“We can prevent that,” he said. “We can be alongside of them, and we can help them do what they need to do to take care of their own people in the Jewish homeland.”