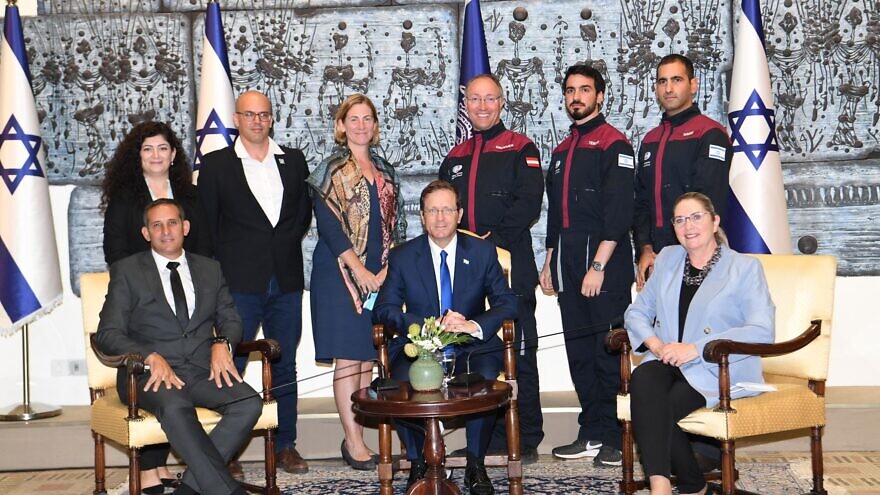 (November 3, 2021 / JNS) Israeli President Isaac Herzog and his wife, Michal, met on Tuesday at his official residence in Jerusalem with two “graduates” of a three-week Mars-simulation mission, the Government Press Office said in a statement.

Praising analog astronauts Alon Tenzer and Liad Yosef for “making history,” Herzog said, “If there’s something that unites humanity, it’s the future life of the universe and the life of the human species.”

Tenzer and Liad, who had just completed the AMADEE-20 Mars Simulation at the Ramon Crater in the Negev Desert, showed Herzog the spacesuits that they had worn during the mission.

“We felt as if we were on Mars,” said Tenzer. “The mission has such an immersive effect that you can really believe that for a few moments, but the rest of the time, you really live it.”

“This simulation goes way beyond make-believe,” he added.

The AMADEE-20 Mars Simulation was a joint project of the Israel Space Agency and the Austrian Space Forum, in collaboration with D-MARS. According to the GPO, the Ramon Crater was selected for the “space station” because of its similarity to the Red Planet.

During the three weeks of the simulation, analog astronauts from six different countries inhabited the “purpose-built” station, where they performed a series of scientific and technological experiments, mirroring tasks planned for future human missions to Mars.