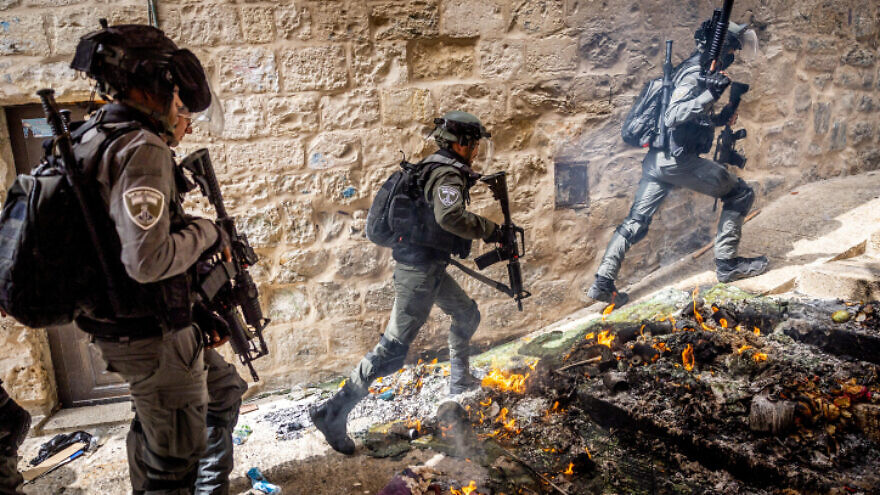 (May 2, 2022 / JNS) The Israel Police announced on Sunday that it has completed the investigation of a Jerusalem Muslim cleric who was arrested on April 22 on suspicion of incitement to terrorism. The cleric is due to be charged by state prosecutors on Tuesday, police said.

The 56-year-old cleric from Beit Hanina in eastern Jerusalem delivered a speech on the Temple Mount in which he stated that “the liberation of the Al-Aqsa mosque will only happen through weapons and force,” according to police.

Following his arrest, the suspect was questioned by Jerusalem Police District’s Central Unit, and a court extended his custody on multiple occasions.

Meanwhile, police said, the Jerusalem Magistrate’s Court agreed on Sunday to a police request to extend by three days the custody of a Muslim cleric from Lod, who was arrested on Saturday on suspicion of incitement to violence in a speech that was recorded and distributed on social media networks.

“The Israel Police will continue to work with the other law enforcement agencies to investigate and deal, in an uncompromising manner, with anyone who exploits their public and religious position to incite terrorism, violence and disturbances against public order illegally,” said Israel Police.

In a speech delivered on Monday at Mount Herzl’s National Hall for Israel’s Fallen, Israel Police Commissioner Insp. Gen. Yaakov Shabtai said that last May’s explosion of violence in sections of the Arab-Israeli sector was “fueled by incitement by terrorist elements.”

The Israel Police, he said, had until then never encountered “so many flashpoints of terror and disturbances,” adding that the force met its challenge “with bravery, thanks to the dedicated officers and fighters who, during those hours, saw themselves as those with the responsibility for the fate of the country on their shoulders.”