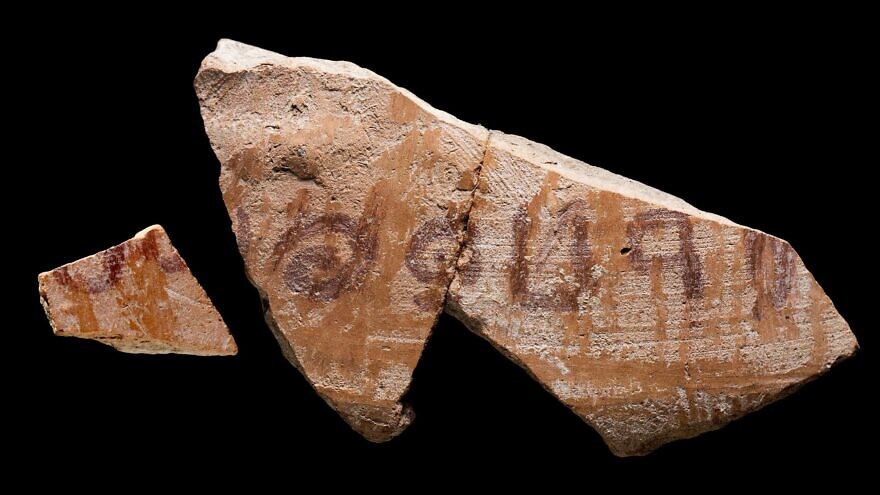 (July 12, 2021 / JNS) A rare, 3,100-year-old inscription was discovered during excavations in southern Israel, the Israel Antiquities Authority announced on Monday.

The partial inscription, written in ink on a small pottery jug, was recovered in the Shahariya forest at Khirbat er-Ra’i, near Kiryat Gat.

The vessel, which can hold approximately one liter (a quart), may have contained oil, perfume or medicine, the IAA said, and the deciphered letters—spelling “Jerubbaal” in alphabetic script dating from around 1,100 BCE—likely pointed to the name of the owner.

Deciphered by epigraphic expert Christopher Rolston of George Washington University in Washington, D.C., the inscription shows the letters yod (broken at the top), resh, bet, ayin, lamed and remnants of other letters, indicating that the original was longer.

“The name Jerubbaal is familiar from biblical tradition in the book of Judges as an alternative name for the Judge Gideon ben Yoash,” explained archaeologists Yossef Garfinkel and Sa’ar Ganor, two of four directors of the excavations, which have been held every summer since 2015 on behalf of the IAA, the Institute of Archaeology at the Hebrew University of Jerusalem and Macquarie University in Sydney, Australia.

“Gideon is first mentioned as combating idolatry by breaking the altar to Baal and cutting down the Asherah pole. In biblical tradition, he is then remembered as triumphing over the Midianites, who used to cross over the Jordan to plunder agricultural crops. According to the Bible, Gideon organized a small army of 300 soldiers and attacked the Midianites by night near Ma’ayan Harod,” they said, adding that the geographical distance between the above story and where the inscription was found could mean that it was referring to a different “Jerubbaal.”

Still, they said that the “possibility cannot be ruled out that the jug belonged to the judge Gideon.

“In any event, the name ‘Jerubbaal’ was evidently in common usage at the time of the biblical Judges,” they said.

According to the IAA, the find contributes to the understanding of the spread of alphabetic script in the transition from the Canaanite to the Israelite period.