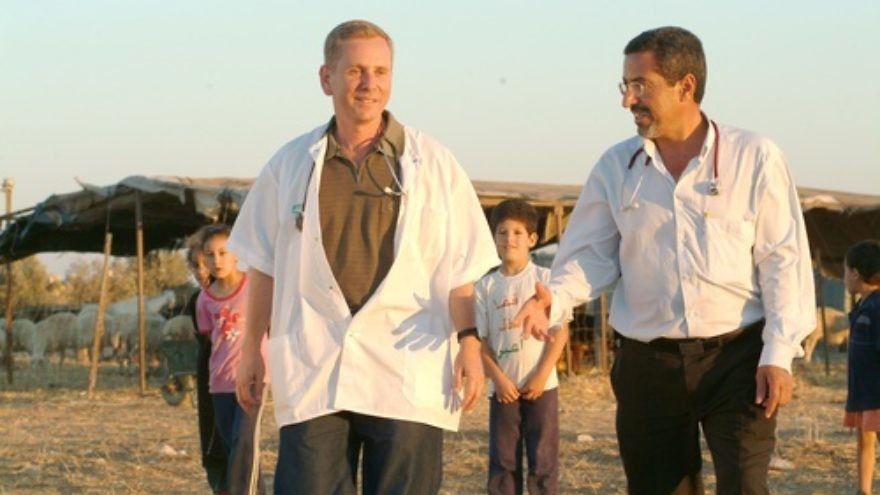 Dr. Ohad Birk (pictured in front, on the left) working with Bedouin. Birk has announced the discovery of a genetic mutation in Moroccan Jews that leads to a crippling disease he is calling PCCA2. Credit: Dani Machlis.
Republish this article
975 WORDS
Spread the word.
Help JNS grow!
Share now:

Imagine that your child is born seemingly normal, but by age 1 or 2 her or she has mental and physical disabilities. By 3, the child has epilepsy and is virtually vegetative.

This phenomenon, known as Progressive Cerebro-Cerebellar Atrophy (PCCA), affects dozens of Israeli families of Iraqi and Moroccan-Jewish descent. But thanks to the team of Dr. Ohad Birk, head of the Genetics Institute at Soroka Medical Center in the southern Israeli city of Be’er Sheva and The Morris Kahn Lab of Human Genetics at Ben-Gurion University of the Negev (BGU), that number may soon be reduced.

A paper on the subject is being published by the British Medical Journal publishing group and should be available to the general public within half a year.

Research shows that PCCA2 is caused by mutations in the gene VPS53. Two different mutations in this gene were found in Moroccan Jews. Miora Feinstein, a graduate student in Birk’s lab, showed that the VPS53 mutations cause defective circulation of vacuoles (endosomes) within patients’ cells, leading to detrimental excessive storage of “junk” within the cells. PCCA2 is a recessive disease, meaning that if both parents are carriers of a VPS53 mutation, there is a 25-percent risk of the disease in each pregnancy.

The mutation causing the similar disease, PCCA (which was discovered in 2010 in Iraqi and Moroccan Jews), is in a different gene and acts through another molecular mechanism, prohibiting selenium from being utilized in the body. The mineral selenium is needed by 25 different brain proteins, and without it there is atrophy of the brain, “leaving a gap between the brain and the skull that should not be there,” explained Birk. Eating items rich in selenium has no impact on affected children.

“These children have the same disease but from a different cause,” said Birk.

Now, PCCA and PCCA2 are the two most common genetic diseases in Jews of Moroccan descent. Deciphering the genetic and molecular mechanism of the diseases enables their prevention.

Not long after the 2010 report about PCCA was published, parents in Israel were able to be screened for carrier status by a simple blood test. Couples that were found to be carriers were offered free testing of their embryos for the disease at Birk’s lab, either in utero by chorionic villus sampling, or by pre-implantation in-vitro testing.

Birk, who said he hopes a similar blood test for PCCA2 will be available to Moroccan Jews within the year, began researching the gene mutations that led to the discovery of PCCA when several families of Moroccan and Iraqi ancestry were identified throughout Israel with a similar clinical picture. Among them, a family with one Moroccan and one Iraqi parent came to him with their two ailing children. One was 3 and already ill. The other was a six-month-old who had started to show signs of deterioration. No one knew what the children had or why they had it. The couple decided to cease having children. Birk decided to use his lab to discover the cause.

But after discovering PCCA, he realized that in seven Jewish families of Moroccan descent, he could not find the original mutation. This latest discovery provides the answer.

Birk has done a great deal of genetic disease research among the populations found in the southern part of Israel, especially the Bedouin who have a 60-65 percent rate of endogamy (marriage within a tribe or among cousins). He and his team at BGU have identified the genetic basis for more than 20 different diseases found mostly among the Bedouin, many of which are now known to be common throughout the Arab world. In 2012, he was invited both to Al Jazeera and to Qatar’s Doha Debates public forum to discuss his findings and the issue of marriage to close family members.

Genetic diseases are more commonly studied and discovered in the Ashkenazi Jewish population, likely because more of the earlier researchers were Ashkenazi Jews themselves, said Birk. Some of these diseases include Tay-Sachs Disease, Canavan, Niemann-Pick, Gaucher, Familial Dysautonomia, Bloom Syndrome, Fanconi anemia, Cystic Fibrosis, and Mucolipidosis IV. Carrier screening is available for all of these diseases in Israel and in the U.S.

“There was an idea that Ashkenazi Jews have more disease than others, but when one begins looking at Sephardic Jewish diseases, they are there,” Birk said. “They have just not been sorted out. Because they have not been sorted out, there was no carrier testing, no prevention programs or anything. I have shifted part of my lab into this, into Jewish non-Ashkenazi—or Sephardic Jewish—diseases.”

In a twist just days before a press release revealing Birk’s PCCA2 discovery was scheduled to be made public, he learned that one of the two parents in several of the Moroccan-Jewish people he tested was not of straight Moroccan descent, but actually of Spanish-Moroccan descent, meaning they likely came to Morocco as a result of the 1492 Spanish expulsion. He thinks this may account for the two different genetic mutations that lead to PCCA 2. Now, he is going to research this. Moreover, he said the genetic mutation striking some of the families from the original test, as well as this most recent test, are still not resolved.

“Now we are looking for a third disease,” Birk said.