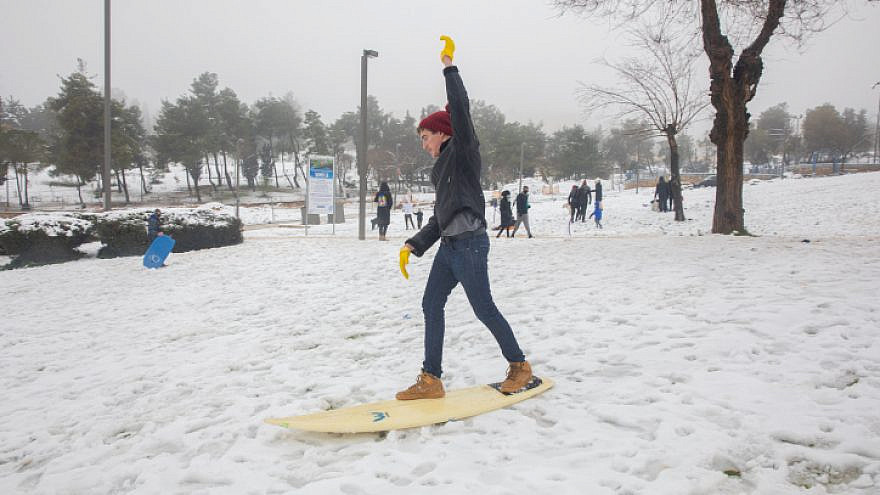 An Israeli teen uses a surfboard to play in the snow in Jerusalem on Feb. 18, 2021. Photo by Olivier Fitoussi/Flash 90.
Spread the word.
Help JNS grow!
Share now:

(February 18, 2021 / Israel Hayom) Residents of the northern Golan Heights woke up to a snowy Wednesday morning as a major cold front entered Israel.

More snow was expected in the country throughout the day, including in Judea and Samaria and Jerusalem, and possibly in the higher elevations in the Negev.

The Mount Hermon ski resort reported that the snow level rose by 30 centimeters (11 inches) and the temperature in the morning stood at 3 degrees Celsius (37 degrees Fahrenheit.) Heavy snow is expected in the region for the next two days.

Meanwhile, firefighters in Haifa helped rescue a man who got trapped in his vehicle after it flipped on its side. He was taken to the hospital and was reported to be in mild condition.

Another man, in his 80s, was moderately injured after being hit by a tree branch that fell due to strong winds. He was taken to the Tel Aviv Sourasky Medical Center with a broken leg and a head injury.

The Israel Police blocked the entrance to several highways due to the stormy weather.

The Sea of Galilee, or Kinneret, has risen by 1.5 centimeters (1 inch) in the last two days. As of Wednesday morning, it stood at 209.56 meters (670 feet) below sea level, reported the Water Authority.

The stormy weather eased up on Thursday; however, it is expected to continue to rain intermittently.