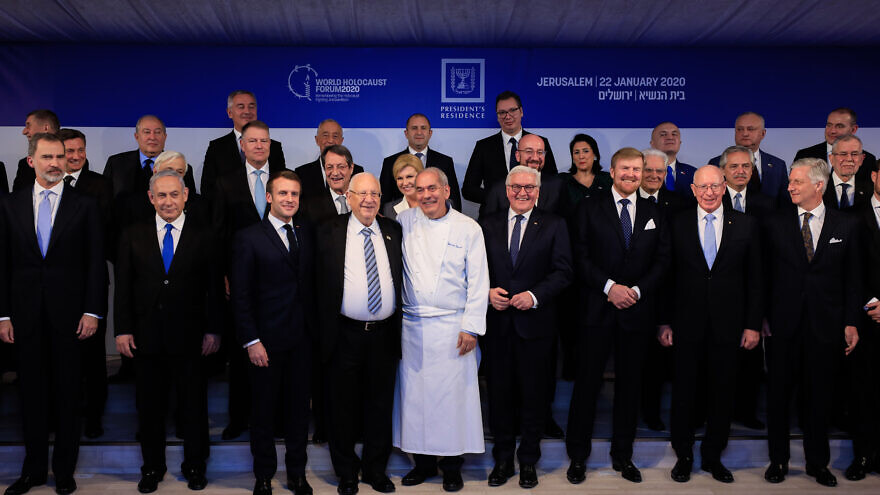 (January 22, 2020 / JNS) Ahead of the Fifth World Holocaust Forum and the 75th commemoration of the liberation of the Auschwitz concentration and extermination camp, Israeli President Reuven Rivlin addressed more than 40 world leaders at an official dinner at his official residence in Jerusalem.

The president began his remarks by saying, “On behalf of the State of Israel and the People of Israel, welcome to Jerusalem. Thank you all for being here. This is a historic gathering, not only for Israel and the Jewish people, but for all humanity. This evening as we remember the victims of the Holocaust, and World War II, we also mark the victory of freedom and human dignity.”

“Tomorrow we will gather at Yad Vashem to remember and to promise—never again,” he continued. “Yad Vashem is a leading center for Holocaust research and education, guided by historians. Historical research should be left to historians. The role of political leaders is to shape the future.”

Rivlin then quoted Holocaust survivor and psychiatrist Viktor Frankl, who wrote the best-selling book Man’s Search for Meaning: “We, who lived in concentration camps, can remember the men who comforted others, and gave away their last piece of bread. They may have been few, but they prove that everything can be taken from a man, but one thing: the last of human freedoms to choose one’s own way.”

Rivlin’s remarks ended with a call to work together to confront anti-Semitism.

“The future lies in the choices we make, especially those we make together, as countries and nations,” he said. “I hope and pray that from this room, the message will go out to every country on earth that the leaders of the world will stand united in the fight against racism, anti-Semitism and extremism, in defending democracy and democratic values. This is the call of our time. This is our challenge. This is our choice.”