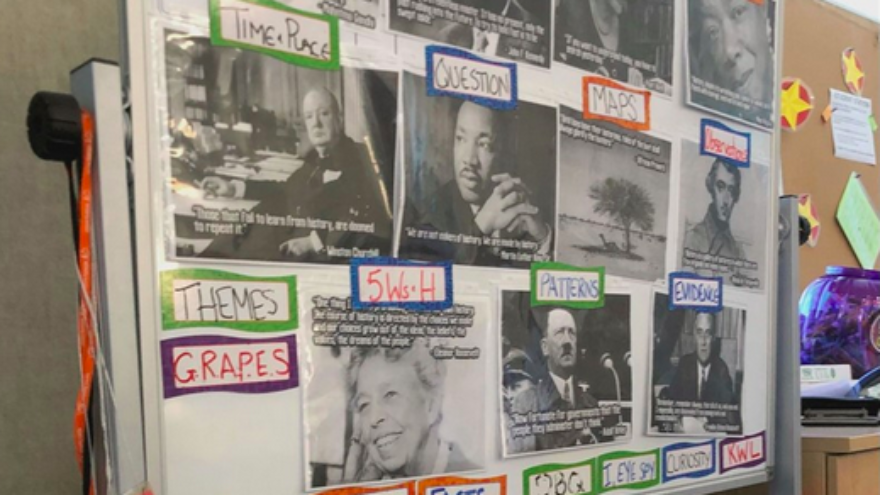 (October 7, 2022 / JNS) A teacher at San Diego’s Carmel Valley Middle School justified the placement of Adolf Hitler’s portrait alongside those of non-genocidal world leaders in a 7th-grade classroom, telling a Jewish student that “Hitler may have done some bad things, but he also had strong leadership qualities.”

“We’re sitting at the dinner table and he says to me, ‘Hey dad, my teacher has a picture of Hitler on the wall,’” the 12-year-old student’s father, Dr. Roy David, told CBS8. Initially in disbelief, the father asked his son for a photo of the classroom display.

“And there’s Adolf Hitler, a big, portrait-size picture of Hitler. And right next to Hitler is Gandhi and Martin Luther King and JFK. And each one of these people has some kind of inspirational quote written underneath them,” David said.

“We have recently experienced one of those times that had a hurtful impact, particularly to our Jewish community, and to others, and for this we are sorry,” Kim wrote in an email to the school community, according to CBS8.

On Thursday, the Simon Wiesenthal Center (SWC) released a letter that it had sent to leaders of the San Dieguito Union High School District, its Superintendent’s Office and Carmel Valley Middle School. The Jewish human rights organization stated that “we need to understand that Hitler was not just another ‘leader’ and ‘Nazism’ was not just another political movement. If you want to compare Hitler’s ‘leadership qualities,’ present him next to photographs of Stalin, Mao and Ayatollah Khamenei, not icons of liberty and human decency.”

SWC added that “such hate almost destroyed civilization and bigotry is alive and well in today’s America in many forms… Please let’s make sure our teachers receive the proper training and our children receive an education that infuses them with basic ethical values.”