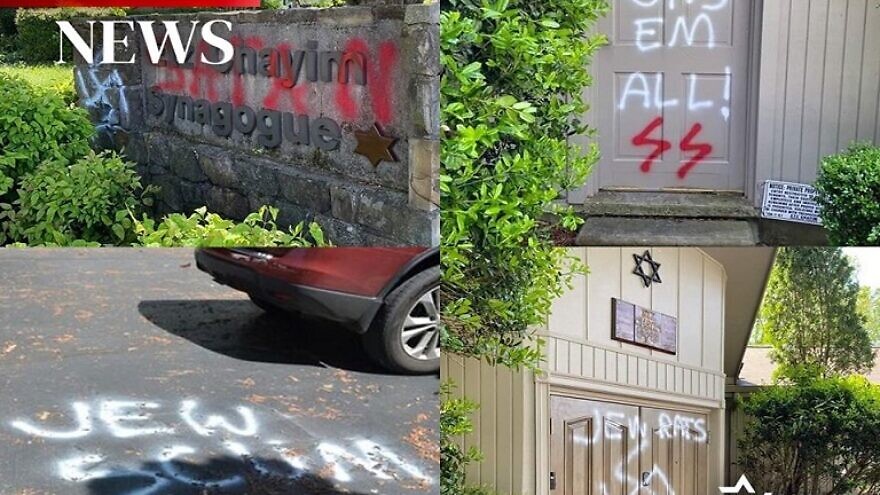 (September 1, 2020 / )In the twenty-first century, anti-Semitism manifests itself in multiple ways and from several different sources across the ideological spectrum. Principally, we see anti-Semitism proliferating on the far right, the radical left and within political Islam. Age-old anti-Semitic tropes and conspiracies are being recycled and applied to varying themes in the modern era. CAM is committed to reporting on all forms of anti-Semitism, from all sources. One of the key takeaways from our analysis is that anti-Semitism is manifesting in drastically different ways, and the primary culprits change from country to country. However, there is one constant – anti-Semitism is accelerating at an alarming rate. 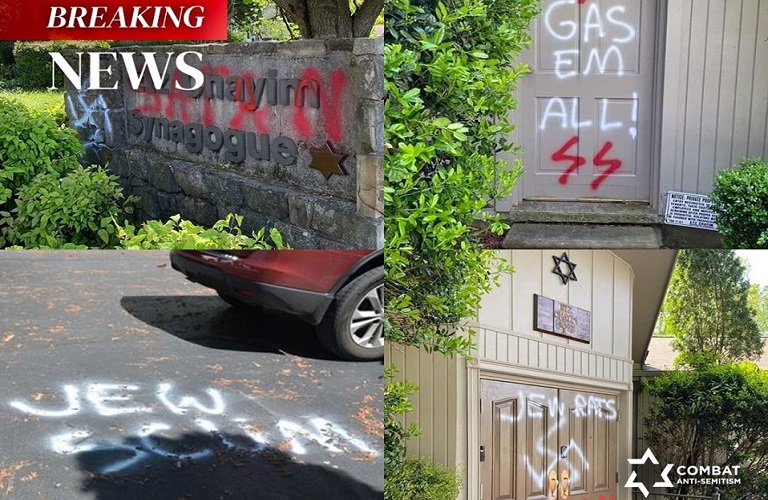 This is what we found.

In total, CAM’s newsletter reported on 2,858 unique stories and pieces about anti-Semitism in the first 52-week period. Broken down, 1,621 stories reported on unique anti-Semitic incidents, with the remaining items covering different categories including studies, government policy, analyses and opinion, follow-up pieces and “humanity” stories that highlight those who are courageously combating anti-Semitism around the world.

Reporting by geography, we covered 669 unique stories in the United States, 311 in the United Kingdom, 134 in Germany, 155 across the Middle East and 352 stories in other countries across the globe. We categorized the incidents by their type and their source in order to formulate internal insights to best inform our work.

Globally, our reporting included 1,070 stories involving hateful conduct or speech towards Jews (66%), 400 incidents of anti-Semitic vandalism (25%), and 151 incidents of physical misconduct or violence directed at Jews (9%). Worldwide, we attributed 38% of our reported incidents to the right, 21% to the left, 19% to political Islam. About 22% of the incidents were from unattributed sources. 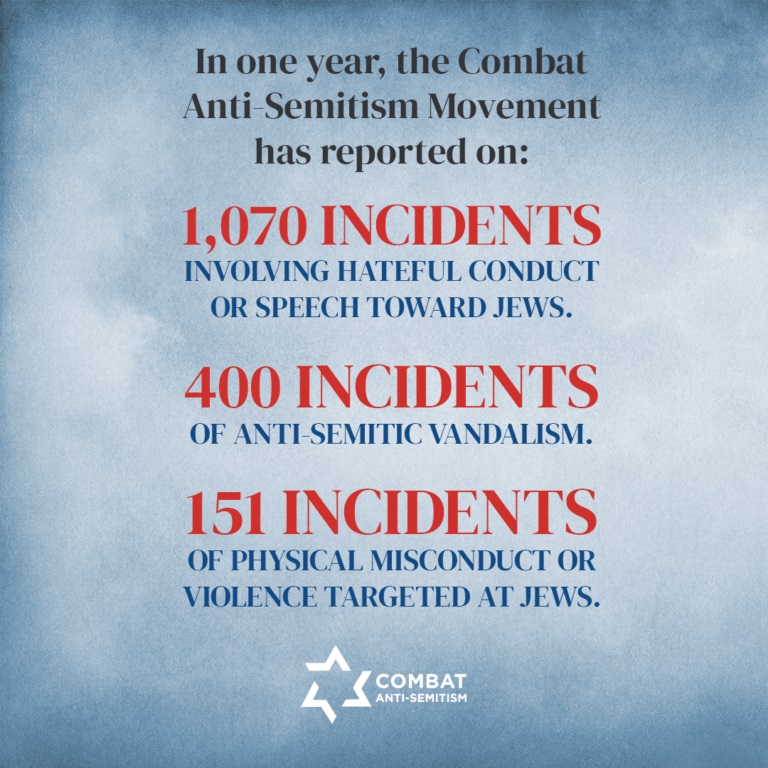 One of the most significant trends in our reporting data is that the leading source of anti-Semitism changes over varying geographies, demonstrating that all three primary sources of anti-Semitism are a threat to the well-being of Jewish people and society as a hole. For example, in the United States, our reporting shows the largest number of incidents emanate from a right-wing ideology (46%), however, nearly a third (28%) of the incidents we covered originated from the left and from within political Islam (the remainder could not be easily attributed).

Across the Atlantic however, this trend shifts completely in the United Kingdom, where anti-Semitic incidents covered in our newsletter were primarily from sources on the left. Of the 311 incidents, we covered in the UK, 162 incidents or 52% represented conduct from individuals or groups affiliated with the left-wing, as British politics was rocked with a constant stream of scandalous anti-Semitism stories, mostly associated with the Labour Party. CAM’s reporting data also shows, however, that anti-Semitism emanating from the right (21%) and from political Islam (9%), remain significant challenges for British society. 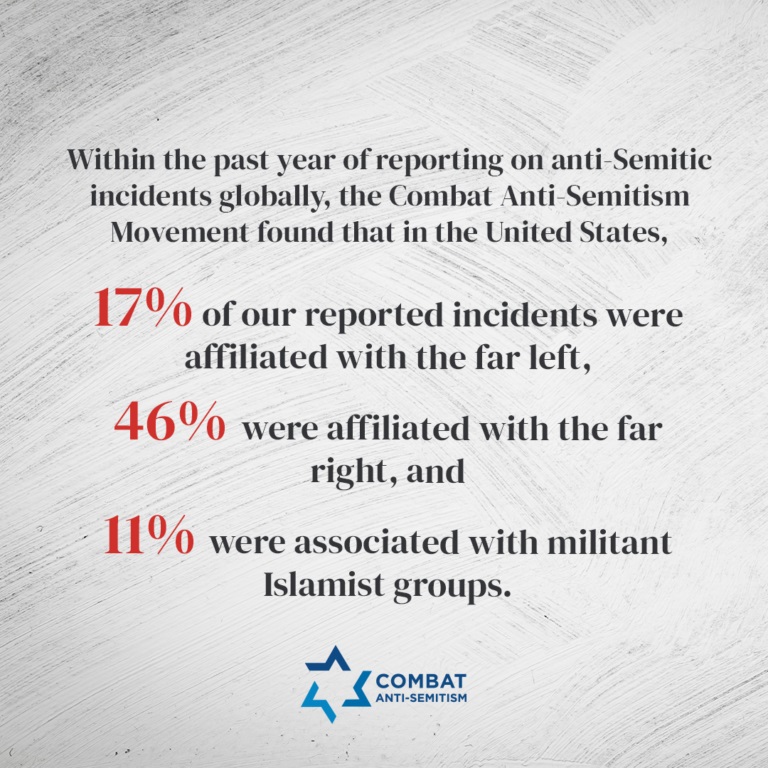 In the Middle East, of the 155 stories that we reported, 100% were attributed to political Islam, often in the context of using anti-Semitic language, incitement or vandalism against the State of Israel, as well as Jews more broadly. Of the individual countries where we segmented out our reporting, Germany had the most evenly distributed sources of anti-Semitic activity. While the far-right was the largest attributable source (23%), the left (20%) and political Islam (13%) were close behind and contributed to a growing share of anti-Semitic incidents in the Federal Republic. In the overwhelming majority of our reporting from a global perspective, acts of anti-Semitic vandalism outpaced acts of physical conduct or violence against Jews. Germany was the exception to this trend, where physical acts made up nearly 19% of cases compared to nearly 16% for vandalism. 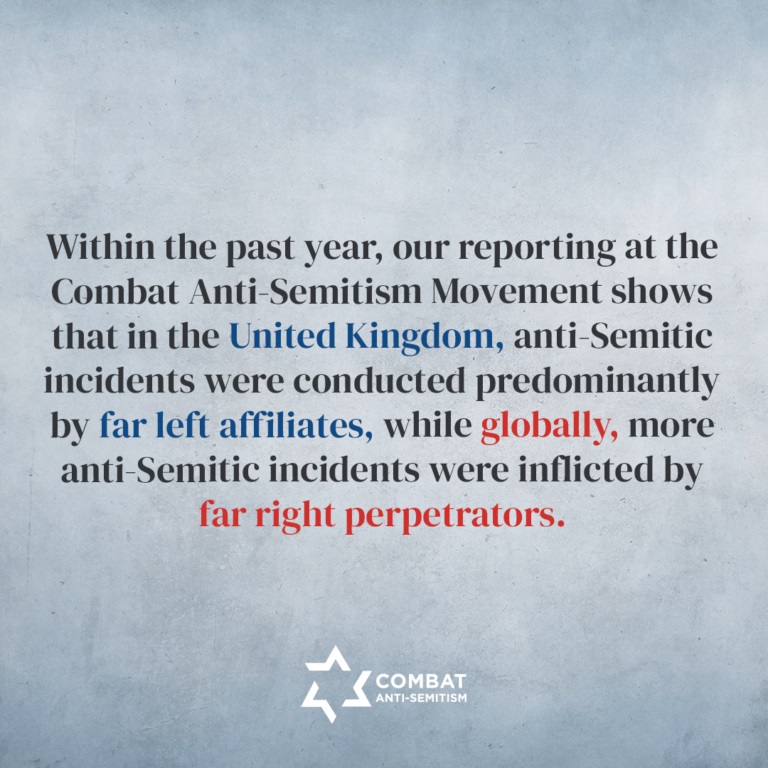 While our reporting broke out the United States, the United Kingdom, Germany, and more broadly the Middle East, as the four places where we saw the most anti-Semitic incidents in the 52-week period, we observed a worrying trend of increased incidents in other places around the world, particularly in South America, Canada, France, Belgium, Italy, Australia and in several other European countries.

Education and building awareness are crucial first steps in being able to comprehensively combat anti-Semitism. By signing up for and sharing CAM’s weekly newsletter, we hope that thousands of new supporters will join us in confronting these trends so that together we can make a grassroots impact in the fight against anti-Semitism.

Sign our pledge and join the movement
JNS Promo+ is an ideal publishing platform to promote organizations and one-of-a-kind initiatives. To learn more about publishing via JNS Promo+, please click here.