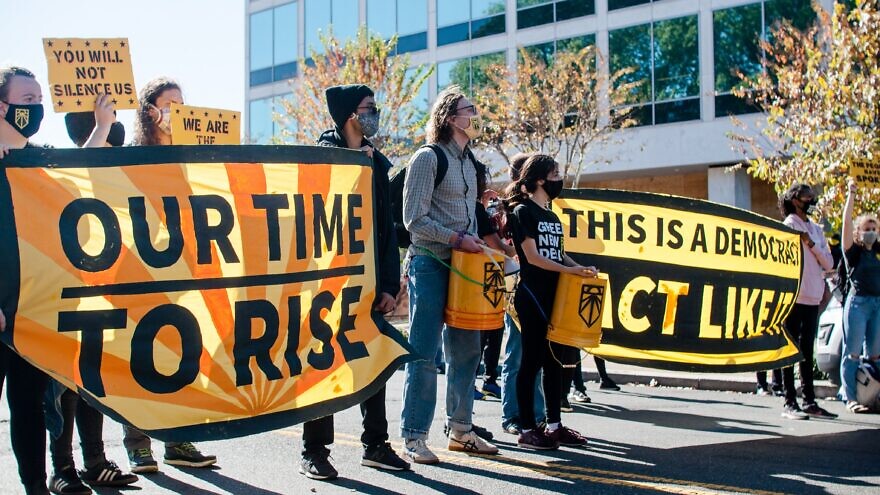 Sunrise DC pulled out of a voting rights rally that took place in the capital on Saturday because three pro-Israel groups—the National Council of Jewish Women, Religious Action Center and the Jewish Council for Public Affairs—were also participating. The Jewish groups are part of the Declaration for American Democracy Coalition.

Sunrise DC said in a statement last week that it would not attend the rally because “we oppose Zionism and any state that enforces its ideology.” It described Israel as a “colonial project” that engages in “violent oppressive tactics” and called for the three Jewish groups to be removed from the coalition since “Zionism is incompatible with statehood and political sovereignty.”

The national Sunrise Movement said afterward that singling out Jewish groups for removal from a coalition is “unacceptable and anti-Semitic.”

In a statement on Sunday that was shared on Twitter, Sunrise DC said “in our [original] statement, we named three Jewish organizations and criticized their positions on Israel but did not mention other organizations in the Declaration for American Democracy Coalition with similar positions. We apologize unequivocally for this.”

“We now understand the way our action has fueled anti-Semitism, which benefits white nationalism and political movements that built power by dividing us, and endangers Jewish people drastically,” the group added.

Sunrise DC also said it is “committed to learning and growing” as it continues to “stand against Zionism, anti-Semitism, anti-Palestinian racism and all other forms of oppression.”

The group further claimed that Zionism is an ideology that led to Israel’s “continued violent” against and “systematic oppression” of Palestinians.