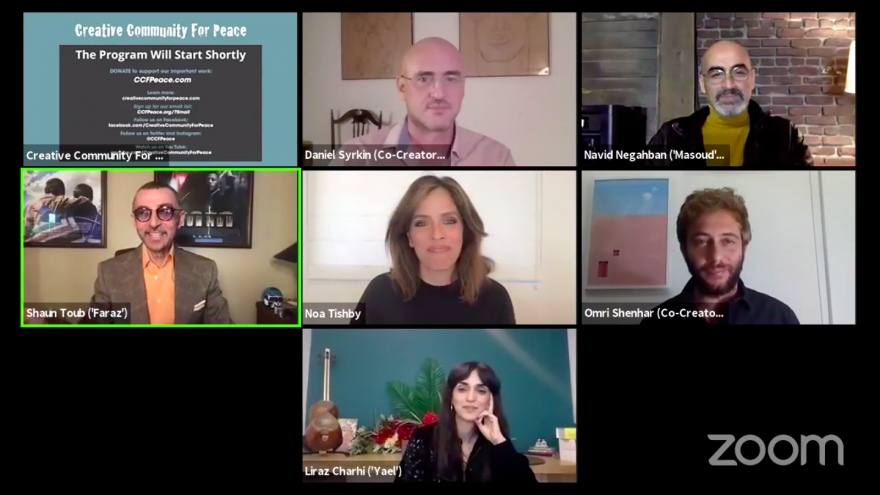 (December 11, 2020 / JNS) The cast and creators of “Tehran,” the hit Israeli series streaming on Apple TV+, explained during a virtual panel discussion on Wednesday how the show was insistent on respecting Iranian culture and the kind of response they received from native viewers.

During the Zoom event, hosted by the nonprofit group Creative Community for Peace—and moderated by Israeli writer and producer Noa Tishby—the show’s Israeli director and co-creator Daniel Syrkin said that from the start, he tried educating himself all that he could so that “Tehran” would be as authentic as possible for viewers. He even studied Farsi.

“I realized I didn’t know anything about Iran,” he acknowledged. “The first thing I did was I called all my Farsi-speaking friends from the military, who became the best advisers, and then I went and started learning Farsi. It was mind-blowing—the depth of the culture [and] the diversity of the people.”

Iranian-American actor Navid Negahban said “truly, Danny sold me on the project. When I talked to him, I saw how passionate he is about the concept. And at the same time, him going and learning Farsi just to be as accurate as he can be to the culture, and the respect that he showed both cultures, I was truly touched.”

The series was shot in Athens, Greece, with 5,000 Iranians used as extras in the show, according to Syrkin. Omri Shenhar, the show’s Israeli writer and co-creator, said he drew inspiration for the script from the news, drawing on real-life events.

Iranian actors from around the world, including in India and Sweden, have already reached out to Syrkin asking if they can appear in the show’s second season. Each panelist told viewers they have received positive feedback from Iranians, even though many at first claimed that the show was Zionist propaganda.

Iranian-Israeli actress Liraz Charhi had friends send photos of them watching the show in the Islamic Republic. Her own mother became so invested in the show that she slapped the actress after seeing her character turn out to be a traitor of Israel in the season finale.

Some Iranian fans also offered advice on what kind of changes should be made in the series—feedback that the show’s creators will consider for the next season.

Syrkin added that many who sent him letters were “very indifferent” to the show. He explained: “Some of them said that all of what we consider as being fair game and showing both sides, many people who oppose the regime said that we’re too soft on the regime. That we’re depicting someone as humane. For them, that was an insult, and for me, it was very interesting. Even though 90 percent of what I received was pro-show, I did hear that we could improve some stuff, and we will try if, with God’s help, we will have a second season.”