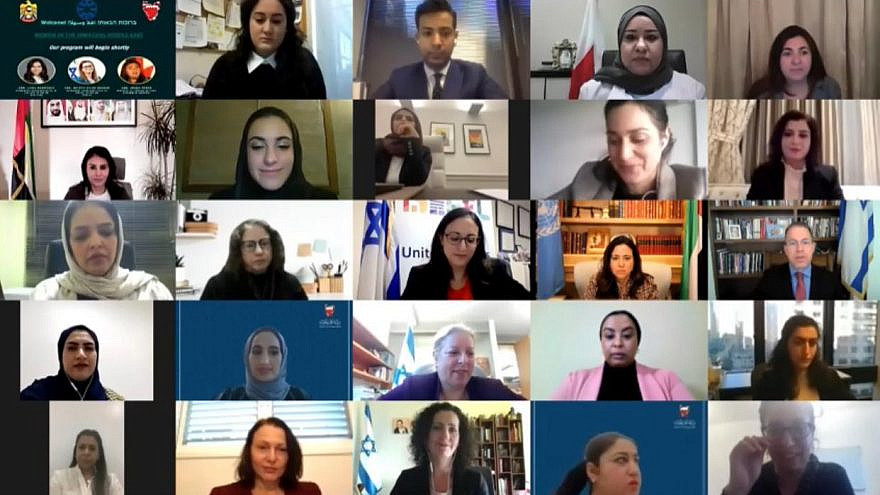 (December 3, 2020 / JNS) Top women diplomats from Israel, the United Arab Emirates and Bahrain joined together on Thursday in a first-of-a-kind session to discuss the role of women in diplomacy, as well as the need for the active involvement of women in promoting peace and security in the Middle East and beyond.

The virtual event was attended by diplomats from around the globe—spanning from Abu Dhabi to Bahrain to Israel to Geneva and New York.

Eilon Shahar, Nonoo and Nusseibeh highlighted a number of challenging issues facing women diplomats in the Mideast. The panelists emphasized the importance of women at the highest levels of decision-making in their respective countries and discussed their visions for how gender must play a role in the newfound ties between them.

“The UAE and Israel are champions of gender equality in our region, and we believe that the agreement between our two countries is already beginning to foster partnerships that will unlock enormous opportunities for women in the region,” said Nusseibeh.

Israeli Ambassador to the United Nations Gilad Erdan, who proposed holding the event in his first meeting with his Gulf partners, stressed the importance of implementing U.N. Security Council Resolution 1325, which calls for the active inclusion and participation of women in promoting peace and security.

“It is essential that women are included on every level of decision-making because a world with gender equality is a better world for all its inhabitants,” said Erdan.

He also spoke of the essential need for advancing gender equality worldwide in line with the United Nations’ 2030 Sustainable Development Goal 5.

This was one of the first official joint events between the governments of Israel, Bahrain and the UAE after the Sept. 15 signing of the Abraham Accords.