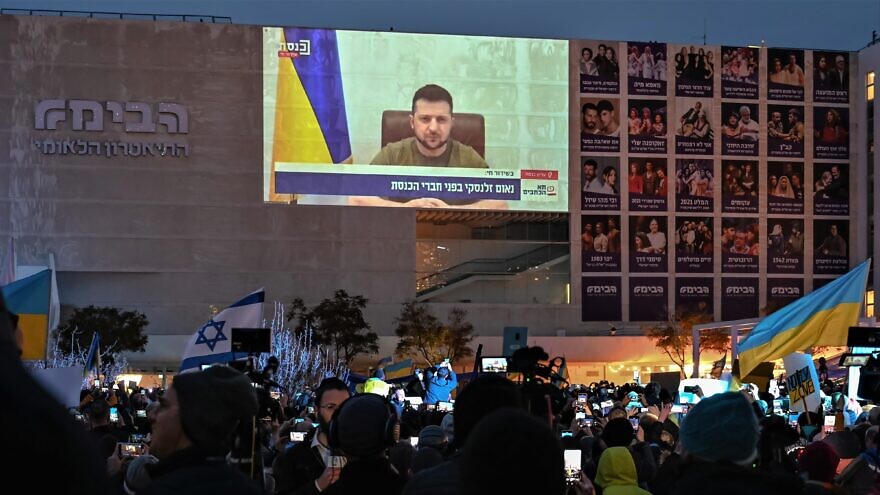 A rally in support of Ukraine at Habima Square in Tel Aviv with a broadcast of Ukrainian President Volodymyr Zelensky as he appeals to Israel a month after the start of Russia's war on Ukraine, March 20, 2022. Credit: Israfoto/Shutterstock.
Republish this article
931 WORDS
Spread the word.
Help JNS grow!
Share now:

Addressing the Haaretz Democracy Conference in a pre-recorded message, Zelenskyy said the alliance “simply would not have happened if your politicians had made only one decision at the time. The decision we asked for,” referring to Ukraine’s requests for Israel’s aerial defense systems.

“It’s really a very bizarre assertion given the fact that Russian-Iranian ties go back a very long time, including on the [Iranian] nuclear program,” said David Wurmser, a senior analyst at the Washington, D.C.-based Center for Security Policy.

Russia-Iran nuclear ties have plagued the United States “for many, many years,” said Wurmser. “I remember dealing with it back in 2002-2003 when I worked at the State Department with John Bolton. So historically, this is just inaccurate,” he added.

He could only speculate as to why the Ukrainian leader would make such a patently false claim.

“Part of it may be simply that they are so narrowly focused on Ukrainian interests that it’s bending the accuracy of their analytical viewpoint,” he said.

Daniel Pipes, president of the Middle East Forum, told JNS that while he “hugely” admired Zelenskyy’s leadership of Ukraine since Russia’s Feb. 24 invasion, Israeli military aid or lack thereof had nothing to do with Russia-Iran ties.

“Israel providing lethal aid to Ukraine would not have prevented the Russian-Iranian alliance; that’s plain silly,” said Pipes. “Zelensky’s anger has proved a powerful tool; he should direct it only at those who deserve it,” he added.

Zelenskyy’s persistent anger at Israel for not doing more to assist Kyiv “ignores the fact that Israel, a small state surrounded by enemies, must tread with utmost caution,” he said.

According to Wurmser, the attitude of Ukraine, the United States and “many others,” who act as if Israel is committing “some horrible moral failure” with regard to Ukraine is “frankly, offensive.”

“There’s no consideration given in these public debates to the very serious price Israel would pay,” he continued, noting Israel must contend with Russia’s presence in Syria and Iran’s nuclear program, while also considering the risk to the Jews of Russia.

“We essentially have a massive hostage situation right now, with a quarter-million Jews in Russia,” he said.

“While I personally believe Israel should do a little more for Ukraine, I very strongly reject moral outrage at Israel, and the expectation of the world for Israel to just drop everything,” he said.

For Wurmser, it’s clear that Israel is being unfairly singled out.

“You don’t see a similar attitude toward other Western countries or developed countries like Japan, and—unlike Israel—many of these countries would not face any severe consequences from Russia if they assisted Ukraine,” he noted.

He offered two reasons why Ukraine is, in his view, obsessively focusing on Israel. One is that Zelenskyy is Jewish, along with other members of Ukraine’s defense establishment, and thus might feel an emotional connection to Israel and expect its support.

“Also, I believe internally that they probably face a fairly complex circumstance being Jewish leaders in a European country. In other words, they need from Israel whatever support they can [get], to validate their position,” he said.

Secondly, Wurmser posits that earlier in the war, the Biden administration may have pushed Ukraine to pressure Israel as a way to put Jerusalem on the defensive, making it less able to resist efforts to revamp the 2015 nuclear deal with Iran. In that scenario, Ukraine could simply be continuing on a path that’s been set for it by the United States, he said.

He also noted that often overlooked in the discussion about whether Israel should provide Iron Dome to Ukraine is whether it’s actually feasible to do so.

“Israel right now faces a very dangerous circumstance with Hezbollah, Iran and Hamas, and it frankly needs to preserve its military assets in-country. It doesn’t have anything it can just send over to Ukraine. That missile that goes to Ukraine could potentially leave one missile hitting an Israeli city,” he said.

Finally, Wurmser said, a review of Ukraine-Israel relations shows that “Israel owes Ukraine nothing.” He pointed to Ukraine’s hostile-to-Israel voting record at the United Nations and  failure to move its embassy to Jerusalem. “Ukraine has never done anything to signal any affinity or friendship with Israel,” he said.

At the same time, he continued, an argument can reasonably be made that it’s in Israel’s interests to send some military equipment to Ukraine. Israel has been too sensitive to Russia’s presence in Syria, and as a result appears weak to Russia and its enemies in the region, he said.

Russia is more concerned about escalation in Syria than Israel is, and would maintain the status quo even if Israel supplies weapons to Ukraine, he continued. Offering surplus weapons to Ukraine, perhaps small arms, would send the right message to Russia that Jerusalem is not afraid, he said.

“It’s precisely because of Russia’s presence in Syria that Israel needs to show that it is not deterred, that it is strong and that Russia needs Israel more than Israel needs Russia,” he concluded.