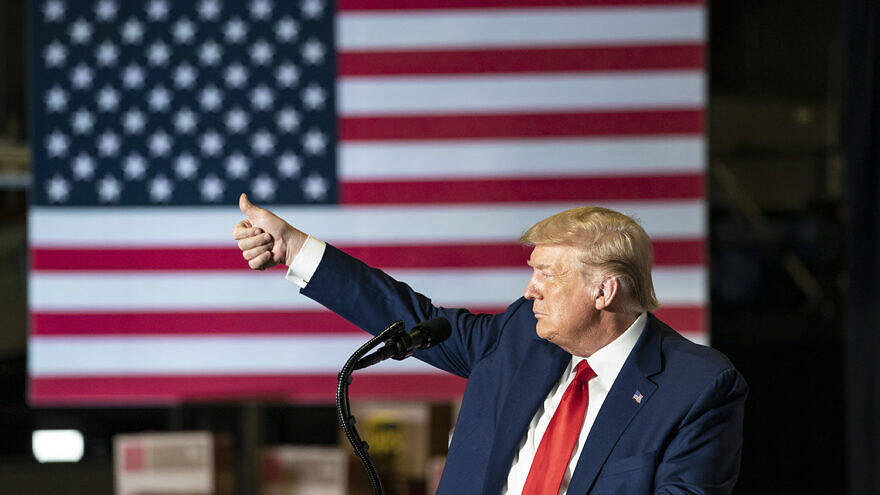 President Joe Biden’s efforts to reboot the Joint Comprehensive Plan of Action (JCPOA), the 2015 nuclear deal, amounted to a betrayal of Israel and the Jewish community, said Trump.

“He sold out Israel’s security and began begging to re-enter the Iran nuclear deal on even worse terms,” he continued. “He unilaterally lifted key sanctions. He appointed countless anti-Israeli extremists to government positions.”

The Biden administration’s actions with regard to Iran potentially posed an existential threat to the Jewish state, said Trump.

“You have to be careful of what they’re doing with Iran, because that may be the end of Israel. That could happen. It could happen very quickly. We’re living in a very fragile world,” he said.

The former president also warned of the rise of anti-Israel forces in Congress, saying the anti-Israel coalition has become “more powerful than the Israeli coalition.”

Trump, who announced his candidacy for a second presidential term on Nov. 15 said, “When we win in 2024, the year of backstabbing and betrayal will end. The United States will stand with Israel once more.”

Many more countries would have joined the Abraham Accords had he been re-elected in 2020, he said, adding that his administration would have had “almost all of them signed,” including Saudi Arabia, “and ultimately probably the Palestinians would have come in at the end.”

“A lot of countries want to join, but the Biden administration doesn’t seem to have its act together. They’re unable to get more of them to join,” he added.