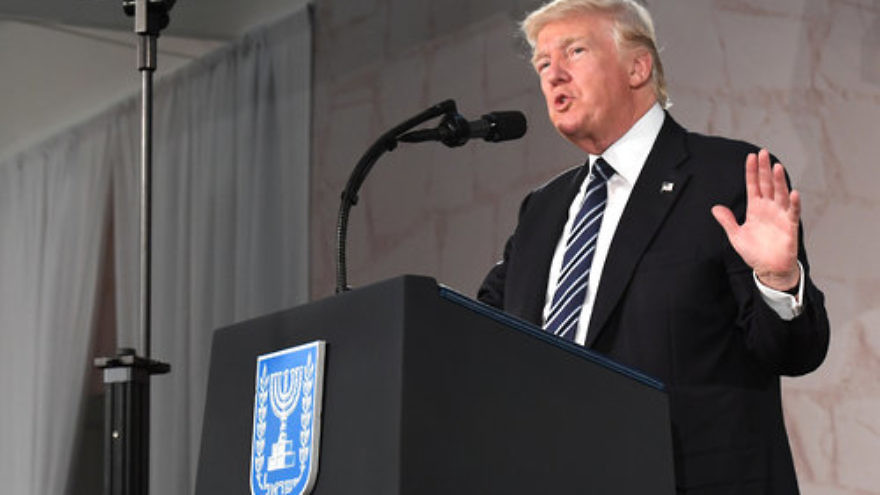 It’s not often that the American Jewish community is united on issues pertaining to President Donald Trump, or on any political topics for that matter. But Trump’s Dec. 6 recognition of Jerusalem as Israel’s capital and his expression of the intent to move the U.S. embassy to that city drew widespread support from Jewish organizations, dovetailing with the expected backing of Christian Zionist groups.

The Conference of Presidents of Major American Jewish Organizations, an umbrella body for 50 national Jewish groups, said it is “gratified that its decades-long policy calling for U.S. recognition of Israel’s capital in Jerusalem has now been realized.”

Sarah Stern, founder and president of the Endowment for Middle East Truth, told JNS that Trump’s decision is a “victory for pluralism and religious freedom,” noting that Israel has allowed unfettered access to Christian and Muslim holy sites since it took full control of Jerusalem in the 1967 Six-Day War.

American Jewish Committee Executive Director David Harris expressed hope that “other countries will value the clarity and wisdom of President Trump’s historic decision, and also recognize Jerusalem and relocate their embassies there.”

Harris also praised Trump for emphasizing in his Dec. 6 remarks that the announcement does not affect the role of the U.S. in navigating final status issues in the Israeli-Palestinian conflict.

“The administration’s commitment to advancing that peace process is most welcome,” said Harris.

Similarly, the Anti-Defamation League (ADL) welcomed the Jerusalem announcement as a “significant step that acknowledges reality” and urged the Trump administration to push forward in peace negotiations.

“We recognize that this is an enormously sensitive and volatile issue, and we call on the administration to implement this new policy in a careful and thoughtful manner in consultation with regional leaders,” said Marvin D. Nathan, ADL’s national chair, and Jonathan A. Greenblatt, its CEO.

Lilian Pinkus, president of the pro-Israel lobby AIPAC, said Trump’s decision “is more than an important benchmark—it is a milestone that corrects a historical wrong. Until today, Jerusalem was the only capital city in the world that the United States neither recognized nor declared as the location of its embassy.”

“The Israeli government, its parliament, courts and prime minister have been located in Jerusalem since just after the birth of the state. We agree with the president that Israel, like all countries, has the right to determine the location of its capital,” said the Jewish Council for Public Affairs.

Yet some Jewish leaders, while recognizing the importance of the Jerusalem move, said the timing was not right.

Union for Reform Judaism President Rabbi Rick Jacobs said that although the U.S. embassy “should, at the right time, be moved from Tel Aviv to Jerusalem,” the Reform movement “cannot support [Trump’s] decision to begin preparing that move now, absent a comprehensive plan for a peace process. Additionally, any relocation of the American Embassy to West Jerusalem should be conceived and executed in the broader context reflecting Jerusalem’s status as a city holy to Jews, Christians and Muslims alike.”

Reconstructionist Jewish organizations said they are “concerned over the possible impacts of the timing and the unilateral manner of President Trump’s decision for the U.S. to formally recognize Jerusalem as Israel’s capital outside the framework of Israeli-Palestinian peace negotiations.”

For many evangelical Christian supporters of Trump, the issues of recognizing Jerusalem as Israel’s capital and relocating the U.S. embassy to that city have been top priorities.

Ahead of the Dec. 4 deadline for Trump to decide on the latest six-month waiver regarding an embassy move, evangelical Christian leaders launched a massive campaign to persuade the president to follow through on his campaign promise to relocate the embassy from Tel Aviv.

In a letter to Trump, the American Christian Leaders for Israel, a network claiming to represent more than 60 million people, penned a letter to Trump that stated, “We want to be clear that tens of millions of Christians in America are in favor of Israeli sovereignty over all of Jerusalem, including our revered Mt. of Olives, Old City of Jerusalem, the Temple Mount and all of biblical Jerusalem.”

One of the co-signers of the letter, Susan Michael, U.S. director of the International Christian Embassy Jerusalem, told JNS she was pleased that Trump “fulfilled his campaign promise to the American people.”

“We are now hopeful that many other nations will follow President Trump’s bold declaration and that consequently they too will afford Jerusalem the dignity it deserves and decide to move their embassies to this extraordinary city,” she said.

Mat Staver, founder and chairman of Liberty Counsel as well as president of Christians in Defense of Israel, told JNS that American Christians are vocal supporters of the Jerusalem policy changes largely because of what they have been taught from the Bible.

“You first read about Jerusalem in the Bible,” Staver said. “You read about the establishment of Jerusalem when King David captured the Jebusites’ city. It has historically and biblically always been the capital of Israel, and I think Christians are united by and large by this move.”

He added, “There is no good time in people’s mind when they don’t want to recognize Israel and the Jewish people. By keeping the embassy outside of Jerusalem, it has not brought peace, not stopped terrorism and not stopped the PA (Palestinian Authority) from inciting and sponsoring terrorism.”

Pastor John Hagee, founder and chairman of Christians United for Israel (CUFI), personally pressed both Trump and Vice President Mike Pence to move the embassy during meetings with the U.S. leaders. CUFI, meanwhile, said its members had sent more than 137,000 emails to the White House in support of the embassy relocation.

Jerusalem, said Hagee, “is the capital of the Jewish state, and I am grateful to the president for changing American policy to finally reflect this reality.”

Boris Zilberman, a deputy director at the Foundation for Defense of Democracies think tank, called Trump’s announcement a “historic step in U.S.-Israel relations and an important affirmation of Israel’s international standing as a co-equal.”

“President Trump made a tough but ultimately correct decision,” Zilberman told JNS. “While the move of the embassy will not happen immediately, the Trump administration is moving to make the move a reality in the very near future as they select an appropriate site.”

“A more secure Israel,” said Zilberman, “is better placed to make tough decisions in the peace process, something [PA] President [Mahmoud] Abbas would be wise to consider as he calibrates his response.”

Daniel Pipes, president of the Middle East Forum think tank, told JNS the Jerusalem recognition “sends a clear signal that Israel, the Jewish state, is a permanent presence that the Palestinians and every other hostile element should accept and work with.”