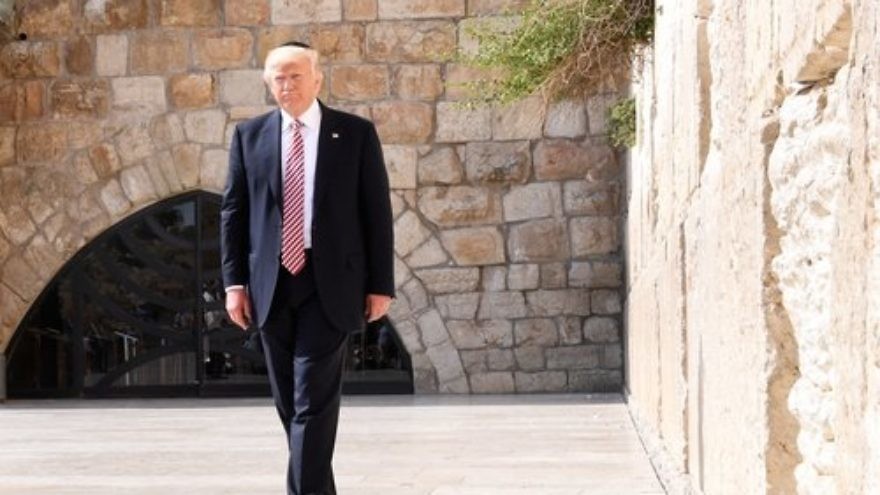 President Donald Trump formally recognized Jerusalem as Israel’s capital on Dec. 6, breaking with decades of U.S. policy and enraging the Palestinians. Legal experts, Israeli leaders and pro-Israel organizations noted that Jerusalem has long been the capital and that Trump’s recognition is a simple acknowledgement of reality.

“I have determined that it is time to officially recognize Jerusalem as the capital of Israel,” Trump said. “I’ve judged this course of action to be in the best interest of the United States of America and the pursuit of peace between Israel and the Palestinians.”

Trump also directed the State Department to begin the process of moving the U.S. Embassy in Israel from Tel Aviv to Jerusalem.

“After more than two decades of waivers, we are no closer to a lasting peace agreement between Israel and the Palestinians. It would be folly to assume that repeating the exact same formula would now produce a different or better result,” said Trump, referring to successive six-month waivers delaying the embassy move that U.S. presidents have signed since 1995, when Congress passed legislation authorizing the relocation.

Avi Bell, a member of the faculty of law at Israel’s Bar-Ilan University and a senior fellow at the Kohelet Policy Forum think tank, lauded the Trump administration for “at long last, bringing U.S. policy on Jerusalem back to reality.”

Bell explained that Israel “designated Jerusalem as its capital shortly after the War of Independence in 1949. Under international law, states do not require outside approval for the selection of their capital city.”

“International law thus views Jerusalem as Israel’s capital since that time, whether other states choose to recognize that fact or not,” Bell told JNS.

In his remarks Wednesday, Trump did not use the phrase “undivided capital,” which is typically utilized by Israeli leaders to affirm sovereignty over eastern Jerusalem.

Yet Israeli Prime Minister Benjamin Netanyahu praised the American leader, saying, “We’re profoundly grateful for the president for his courageous and just decision to recognize Jerusalem as the capital of Israel and to prepare for the opening of the U.S. embassy here. This decision reflects the president’s commitment to an ancient but enduring truth, to fulfilling his promises and to advancing peace.”

Israeli President Reuven Rivlin called the U.S. decision “a landmark in the recognition of the right of the Jewish people to our land, and a milestone on our road to peace—peace for all the residents of Jerusalem, and the whole region.”

He said there is “no significance” to the move under international law, as Jerusalem’s legal standing as the capital of the Jewish state “remains unaffected by the recognition or non-recognition of other states.”

“There doesn’t seem to be any legal significance to the U.S. recognition of Jerusalem under domestic U.S. law either,” Bell said.

“Russia recognized Jerusalem as Israel’s capital several months ago,” noted Bell, who believes that U.S. recognition of Jerusalem may cause other countries to make similar moves.

In April, the Russian Foreign Ministry said it views “west Jerusalem” as the Israeli capital rather than the entire city, prompting a cautious response from Israel that it was “studying” Moscow’s position. Also this year, Jerusalem has been recognized as Israel’s capital by the Pacific island nation of Vanuatu and the Czech Republic. Like the Russians, the Czechs limited their recognition to western (pre-1967) Jerusalem.

Ahead of Trump’s announcement, the U.S. president had spoken with Jordan’s King Abdullah to inform him of the American policy change.

“[This] will have serious implications for security and stability in the Middle East, and will undermine the efforts of the American administration to resume the peace process and fuel the feelings of Muslims and Christians,” Abdullah warned.

Trump’s move faced opposition from other Muslim and world leaders. Turkish President Recep Tayyip Erdogan called recognition of Jerusalem as Israel’s capital a “red line” that would force Turkey to cut off relations with the Jewish state. French President Emmanuel Macron said the status of Jerusalem should be determined through negotiations.

Reactions from Jewish, Christian and pro-Israel organizations swiftly poured in after Trump’s announcement.

“This is not only the right and brave decision, but it is also a decision of extraordinary importance to Israel and the Jewish people,” said Farley Weiss, president of the National Council of Young Israel. “We are gratified that the president did not let terror threats prevent him from taking this momentous step forward in our relationship with the Jewish state.”

Roz Rothstein, CEO of the pro-Israel education group StandWithUs, said the decision “acknowledges what has already been true for a long time. Jerusalem has been the most important city to the Jewish people for 3,000 years. That it is now the capital of a modern Jewish state is an example of historical justice that everyone should not only recognize, but celebrate.”

Union for Reform Judaism President Rabbi Rick Jacobs said that although the U.S. embassy “should, at the right time, be moved from Tel Aviv to Jerusalem,” the Reform movement “cannot support [Trump’s] decision to begin preparing that move now, absent a comprehensive plan for a peace process. Additionally, any relocation of the American Embassy to West Jerusalem should be conceived and executed in the broader context reflecting Jerusalem’s status as a city holy to Jews, Christians and Muslims alike.”

Christians United for Israel (CUFI) said that its members have sent more than 137,000 emails to the White House in support of moving the embassy to Jerusalem.

“Jerusalem has been the epicenter of the Jewish faith since King David danced into the city with the Ark of the Covenant over 3,000 years ago. It is the capital of the Jewish state, and I am grateful to the president for changing American policy to finally reflect this reality. I look forward to the day we open the doors of the U.S. Embassy to Israel in Jerusalem,” said Pastor John Hagee, CUFI’s founder and chairman.

Rabbi Yechiel Eckstein, founder and president of the International Fellowship of Christians and Jews, called Trump’s decision a “bold, courageous move that is long overdue, and is especially significant coming from Israel’s closest ally.”

“Both Jews and Christians around the world have prayed for this day, which rights a historic wrong by affirming to the world that Jerusalem is the eternal capital of the Jewish people,” said Eckstein.

After Trump had informed him of America’s intentions on Jerusalem before the announcement was made, Palestinian Authority (PA) President Mahmoud Abbas responded that the “firm” Palestinian position is that “there is no Palestinian state” without eastern Jerusalem as its capital, the PA news agency Wafa reported.

Meanwhile, the PA-ruling Fatah party and the Hamas terror group announced three “days of rage” in Jerusalem, the disputed territories and Gaza over Trump’s decision.

Israel prepared for a potential eruption of Palestinian violence amid the U.S. announcement, with the Shin Bet security agency, Israel Police and other Israeli security forces convening to assess the situation and prepare for riots and terror attacks.

The State Department ordered U.S. government employees to avoid Jerusalem’s Old City and the disputed territories due to expected Palestinian violence. Additionally, the U.S. instructed its diplomatic missions in the Middle East to raise their level of alertness over possible reprisals against American institutions in the region.