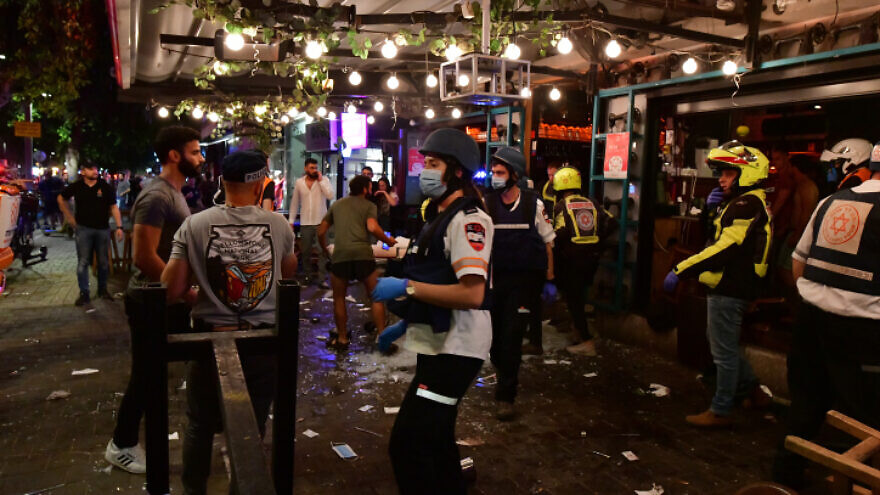 Police and rescue workers at the scene of a deadly terror attack on Dizengoff Street in Tel Aviv on April 7, 2022. Photo by Avshalom Sassoni/Flash90.
Spread the word.
Help JNS grow!
Share now:

(April 7, 2022 / JNS) At least one terrorist opened fire on Thursday night in the heart of Tel Aviv on Dizengoff Street in a crowded area with restaurants and bars.

The police have asked residents in the area to stay inside while the manhunt was in progress. In a highly unusual move, the Transportation Ministry temporarily halted all public transportation in the city center, in compliance with police orders, Channel 12 News reported.

Tel Aviv Sourasky Medical Centers/Ichilov Hospital said 10 people are being treated, and at least four have already been operated on, according to Israeli media.

“We saw 6 patients lying on the sidewalk. We immediately began treatment, including bleeding control and bandaging. 2 were unconscious and underwent resuscitation & 4 others were conscious,” Magen David Adom paramedic Yisrael Weingarten said in a statement on Twitter.

It is the latest in several deadly terrorist attacks perpetrated by Palestinians in recent weeks that have resulted in the deaths of 11 people.

The police later released a photo showing the suspect in the shooting attack. The photo shows a man wearing dark long-sleeved short or jacket, dark pants and sneakers.

Israeli Prime Minister Naftali Bennett, who held security consultations on the shooting, expressed his condolences to the families.

“This is a very difficult night. My condolences to the families of the murdered and I’m praying for the complete recovery of the wounded,” Bennett said. “Security forces are in pursuit of the terrorist who carried out the murderous rampage this evening in Tel Aviv.”

Bennett vowed that security forces will capture the terrorist and that “anyone who assisted him, directly or indirectly, will pay the price.”

???????????? — TERROR IN TEL AVIV: Many running for their lives as the shooting attack unfolds. pic.twitter.com/4Ribo8vPvZ

Police told people to avoid the area and stay in their homes as Ynet reported that a search is underway for a possible second gunman.

Tonight in #Gaza, praises can be heard after a terrorist attack in Tel Aviv. pic.twitter.com/lUrF5tfREY