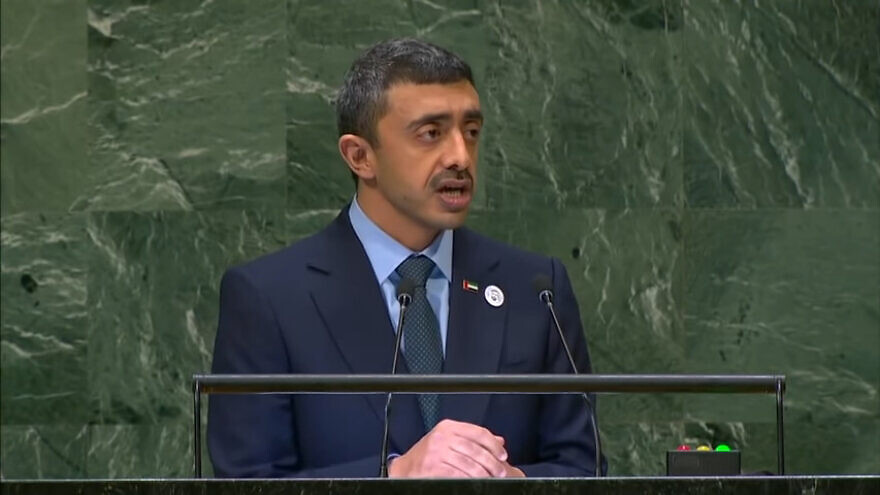 Al Nahyan spoke about the Abraham Accords, relations with the United States and extremism in the Middle East in a videotaped interview with Jason Isaacson, AJC chief policy and political affairs officer, who had met with Al Nahyan on multiple occasions.

Al Nahyan noted that the coronavirus pandemic played a role in the normalization agreement, creating the opportunity for a breakthrough in negotiations.

“There is recognition that science will play a much bigger role in our thinking going forward. It is only possible when you have successful technological countries, like the UAE and Israel, in the region come together,” he said. “Such a partnership was due, but COVID has made us move in that direction much faster.”

For Al Nahyan, the accords could lead to more peace in the region since there will be an example of tangible evidence of Arab countries working with Israel, saying it is a “people-to-people” relationship.

He also spoke extensively about the threat of extremism from radical groups and ideologies in the Middle East and Europe, including Hamas, Hezbollah and the Muslim Brotherhood.

He explained that countries, especially in Europe, divide terrorist groups into political and military wings when the organizations themselves do not make the same distinction.

Following Al Nahyan’s interview during the forum, AJC announced that it will be expanding Project Interchange—an educational program by AJC to introduce Israel to leaders from the United States and countries around the world—to host delegations of policymakers and opinion influencers from countries that signed the Abraham Accords.

The first seminar in Israel for Arab Gulf leaders is slated to take place in November, with a second group will come in January 2022. The new AJC office in Abu Dhabi will be involved in arranging the delegations.

“The groundbreaking expansion of AJC’s Project Interchange to include visits from and to Arab countries is aimed at reinforcing regional collaboration and, as a consequence, the circle of peace,” said CEO David Harris in a news release.