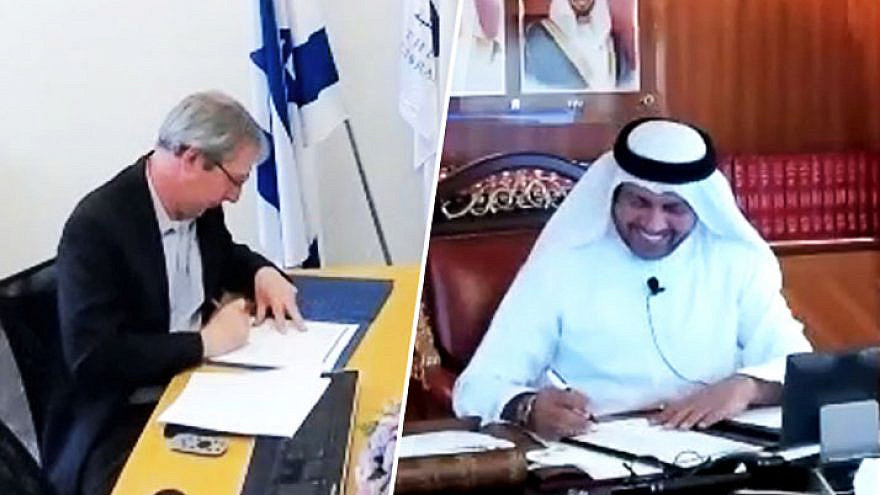 (May 5, 2021 / JNS) The National Library of Israel (NLI) in Jerusalem and the National Archives of the United Arab Emirates in Abu Dhabi have signed a historic memorandum of understanding (MoU), the two organizations announced in a joint statement on Wednesday.

The MoU, which was signed by the two institutes’ directors, Oren Weinberg and Abdulla M. Alraisi, commits both institutions “to work together in support of mutual and separate goals and for the benefit of the international cultural and documentary heritage sector,” according to the statement.

Valid for an initial period of three years, the agreement lays out several areas for collaboration, including “digitization and digital sharing of holdings and research materials; professional knowledge-sharing; cultural exchange, such as conferences, workshops, trainings, study tours, exhibitions; and more.”

With regard to the digital sphere, a number of specific initiatives are already being discussed, according to the statement.

David Blumberg, chairman of the NLI’s Board of Directors, said that such cultural collaborations would serve as the cornerstone for lasting ties between the two countries.

“I have no doubt that the real leap forward in ensuring sustainable peace and cordial relations over time will be in the realm of cultural ties, and in the importance of respect for other cultures. I am certain that close collaboration between the National Archives of the UAE and the National Library of Israel will serve as a cornerstone in ensuring warm relations for the mutual benefit of both countries into the future,” he said.

UAE National Archives director Alraisi said that collaboration with the NLI would help fulfill the Archive’s central mission to “document the memory of the homeland for generations.”

“Here we are today trying to complete our mission by reaching the holdings of the Israeli National Library to enhance the holdings of the National Archives with more documents, books and periodicals that were issued in the Hebrew language, which has become of great significance to intellectuals and those interested in history, heritage and contemporary sciences,” he said.

Founded in 1892, the NLI, Israel’s main research library, is currently building a landmark new campus, next to the Knesset in Jerusalem, which is scheduled to open next year.

The UAE’s National Archives was established in 1968 under the name “Documents and Research Bureau,” with the goal of gathering and preserving documents and information relating to the history and culture of the Arabian Peninsula in general and the UAE in particular. In 1972, its name was changed to the Center for Documentation & Research.