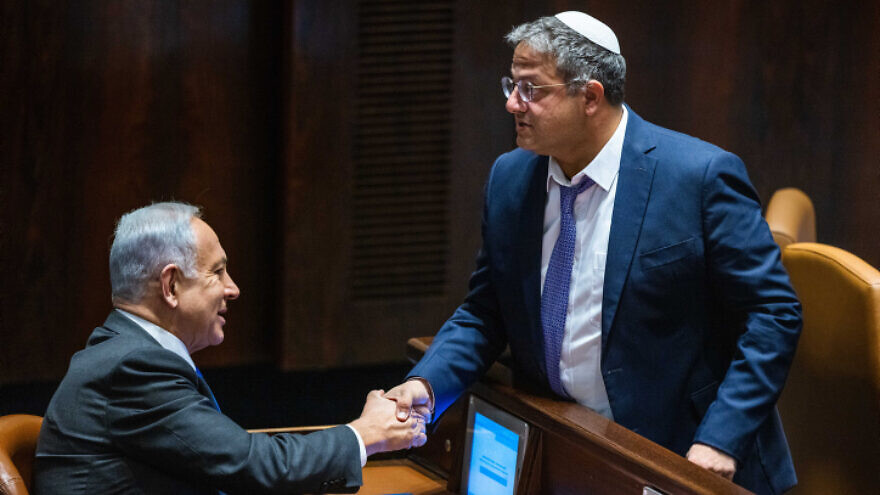 (December 29, 2022 / JNS) A mix of congratulations and concerns has poured in from American Jewish organizations as Israeli Prime Minister Benjamin Netanyahu swore in his government on Thursday.

The Conference of Presidents of Major American Jewish Organizations, serving as the umbrella organization of American Jewry, issued a statement calling Netanyahu “a longtime friend” who is “deeply committed to the strength of the relationship between Israel and Diaspora communities.”

The Conference of Presidents said it looked forward to working with Netanyahu on deepening the U.S.-Israel bond and countering the threat from Iran and its terror proxies, along with advancing the Abraham Accords and combating antisemitism.

Outside of Netanyahu himself, the Conference of Presidents said it will “work closely with the new Israeli government, the Biden administration and the bipartisan congressional leadership to advance our common strategic interests and to protect our shared values.” It also noted now-former Prime Minister Yair Lapid’s leadership and pledged to “engage with him over the years ahead.”

A statement from the Jewish Federations of North America, however, indicated consternation with the makeup of the new government.

Pointing to the Federations’ “long and fruitful relationship” with Netanyahu, it promised to work with him and the new government “to support the growth and vitality of the Jewish state and to strengthen the relationships between Israel and the North American Jewish community.”

It expressed, though, “significant concerns over statements and positions held by some members of the incoming coalition, which have serious implications for our Jewish communities,” and said it would continue to make its own positions known while advocating for “policies and initiatives that help build a welcoming, inclusive and pluralistic society.”

The Federations statement called Israeli-North American Jewry ties “eternal” and “unbreakable” and said that its commitment to Israel “transcends any one government, any one point in time, and any particular policy or statement.”

The American Jewish Committee released its own statement last week when Netanyahu announced he had formed his government, noting its 40-plus-year relationship with him.

“Due to AJC’s long-standing working relationships with Israeli government officials on shared priorities, as well as our profound admiration and respect for Israel’s vibrant democracy and civil society, we trust that Israel will continue to uphold the values that have allowed it to stand out as a beacon of freedom in the Middle East and as a source of pride and spiritual sustenance for the Jewish people as a whole,” the statement said.

Issuing perhaps the harshest statement within mainstream American Jewry with regards to the new government, the AJC said it will work with Netanyahu and other policymakers “to help ensure that the inflammatory rhetoric that has been employed by some members of the governing coalition—rhetoric unrepresentative of Israel’s democratic values, its role as a homeland for all Jews, and its unwavering quest for peace—will not define the domestic and foreign policies of the new government.”

The Zionist Organization of America, meanwhile, noted upon the formation of the government last week that “it is vital that Israel have a strong government such as the incoming coalition, which is dedicated to protecting Israel’s rights and safety.”

It countered criticism of the new government, saying there is nothing “extreme about proposing to give needed tools to Israel’s brave young IDF soldiers to enable them to protect their fellow Israeli citizens from rampant Palestinian Arab terror,” or about proposing to deport convicted Palestinian Arab terrorists and giving Jews equal prayer rights on the Temple Mount.