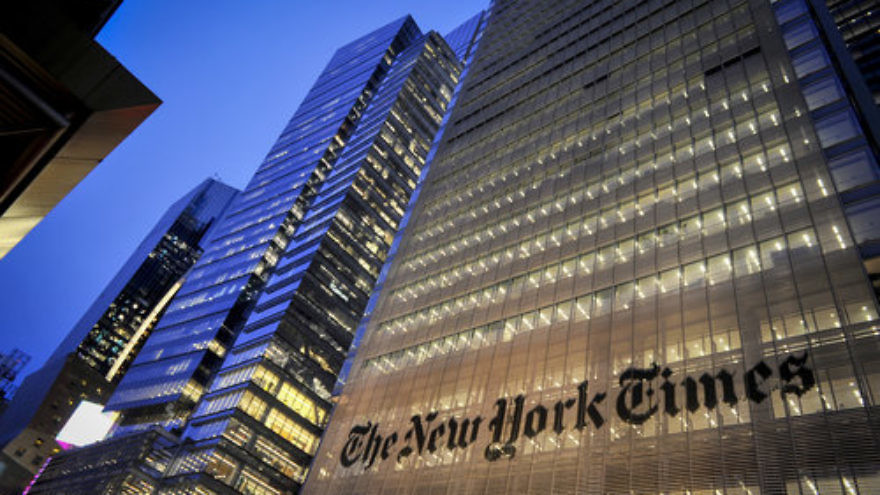 (April 20, 2017 / JNS) WASHINGTON—Recent admissions by The New York Times and The Washington Post of errors in their coverage of Israel are rare exceptions to the “culture” of anti-Israel bias that permeates both newspapers, media watchdogs say.

The Times admitted April 16 it was wrong not to mention Palestinian terrorist Marwan Barghouti’s five murder convictions in the biographical line of his recent op-ed. In March, the Times acknowledged that an unsigned editorial erred in claiming the U.S. has always viewed Israeli settlement construction as “illegal.”

Meanwhile, The Washington Post April 17 published a rare correction on its op-ed page. The one-paragraph item stated, “The March 28 Richard Cohen op-ed, ‘Will Israel Win the West Bank but Lose its Soul?,’ incorrectly stated that Israel reserves some roads for Jews only. The country closes some roads to virtually all Palestinians, but they are open to all Israeli citizens and to other nationals, regardless of religious background.”

Cohen, a regular Post columnist, had written March 28 that “the word ‘apartheid’ looms like thunderheads on the horizon” because Israel, “while recoiling from the word ‘apartheid,’ has adopted some of its techniques,” such as the allegedly separate roads.

The editors made the correction after a complaint by the Committee for Accuracy in Middle East Reporting in America (CAMERA). Cohen told JNS.org that while he could not comment on his discussions with the newspaper’s editors, the correction was published with his approval.

This isn’t the first time The Washington Post has published, and then retracted, an allegation about the roads. In December 2009, the Post ran an Associated Press (AP) dispatch referring to “Israel’s practice of reserving some roads for Jews.” One month later, in response to outreach by CAMERA, the Post printed a correction, stating the allegation by AP was “incorrect” and that “the country closes some roads to virtually all Palestinians, but they are open to all Israeli citizens and to other nationals, regardless of religious background”—the identical wording used in the Post’s correction of Richard Cohen’s op-ed this week.

Gilead Ini, a senior research analyst for CAMERA, told JNS.org that “some credit” goes to the Times and Post for their corrections, since fixing errors “is the least readers deserve.” But Ini emphasized, “Readers of serious newspapers deserve more than the least. If errors tend to consistently skew in one direction—and the anti-Israel skew of each of these major corrections is not a coincidence, but a trend—then newspapers need to look into a culture that seems especially indulgent with outlandish anti-Israel accusations.”

Moreover, Ini added, “It’s not enough to correct only some errors—‘sometimes accurate’ is a terrible epithet for a serious media organization.” He pointed out that the Times has failed to correct recent articles that erroneously claimed Israel has built no cities for its Arab population, and that a new Israeli town in the Negev will be for Jewish residents only. “As long as The New York Times publishes errors like this without correcting the misinformation, it will remain ‘sometimes accurate,’” Ini said. “It’s not a good look.”

Activists who monitor The Washington Post likewise view the correction of the Cohen column as the exception that proves the rule. Carol Greenwald, treasurer and spokesperson for Eye on the Post, a Washington, DC-based group that tracks the newspaper’s coverage of Israel, told JNS.org that while she is “encouraged” by the correction regarding the roads, “the fact that Cohen would repeat this canard, which has been corrected numerous times in other news outlets, indicates that Cohen and the Post have bought into the preposterous lie that Israel is an apartheid state.”

Greenwald added that The Washington Post’s coverage of Israel “has never been as biased as The New York Times, but its coverage has never been unbiased or fair—how bad it is fluctuates with individual reporters’ biases, but in general it has never been good coverage and it has not gotten better over the years.” As an example, she noted that one of the Post’s correspondents in Israel, Ruth Eglash, this week has been using the term “political prisoners” in her news reports about hunger-striking Palestinian terrorists who are imprisoned in Israel.