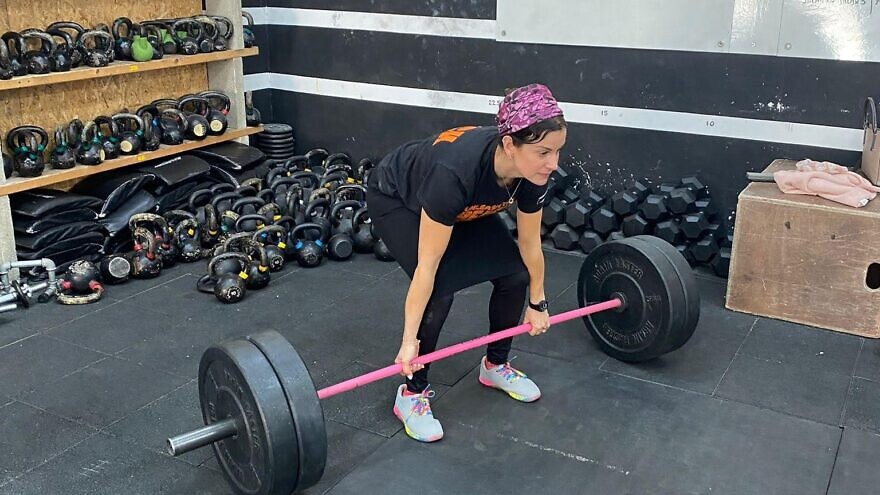 (April 26, 2022 / JNS) Powerlifting competitions (known as “meets”) have been out of reach for many religious women who follow laws of modesty of dress, due to the International Powerlifting Federation requirement of competing in front of coed judges and audiences in a singlet, which exposes the arms and legs. That includes both Jews and Muslims.

But a new initiative from the “Women Who Lift–Israel” community is about to change all that.

According to its founder, Sarah Illouz, a 40-year-old Montreal-native-turned-Israeli, the movement was established during the coronavirus pandemic in Israel with the goal of building an online community (in the absence of the camaraderie that happens at CrossFit gyms), of women who can share their achievements, struggles and questions in all matters related to strength sports. Today, there are nearly 2,000 members in the online community, including talented and passionate religious women who have made strength sports, and particularly powerlifting, a part of their lives.

Powerlifting is the sport of the back squat, bench press and deadlift, in which the competitors aim to lift the maximum amount of weight possible for a single rep. In order to properly analyze competitors’ movements and form, judges must be able to clearly see one’s knees and behind, which, for religious women, are purposefully covered for modesty.

On May 27, the first-ever sanctioned women’s-only powerlifting meet is set to take place at FitnessLand in Rishon Letzion, which will open its studio to women only, enabling religious women to participate without compromising their modesty in front of men. 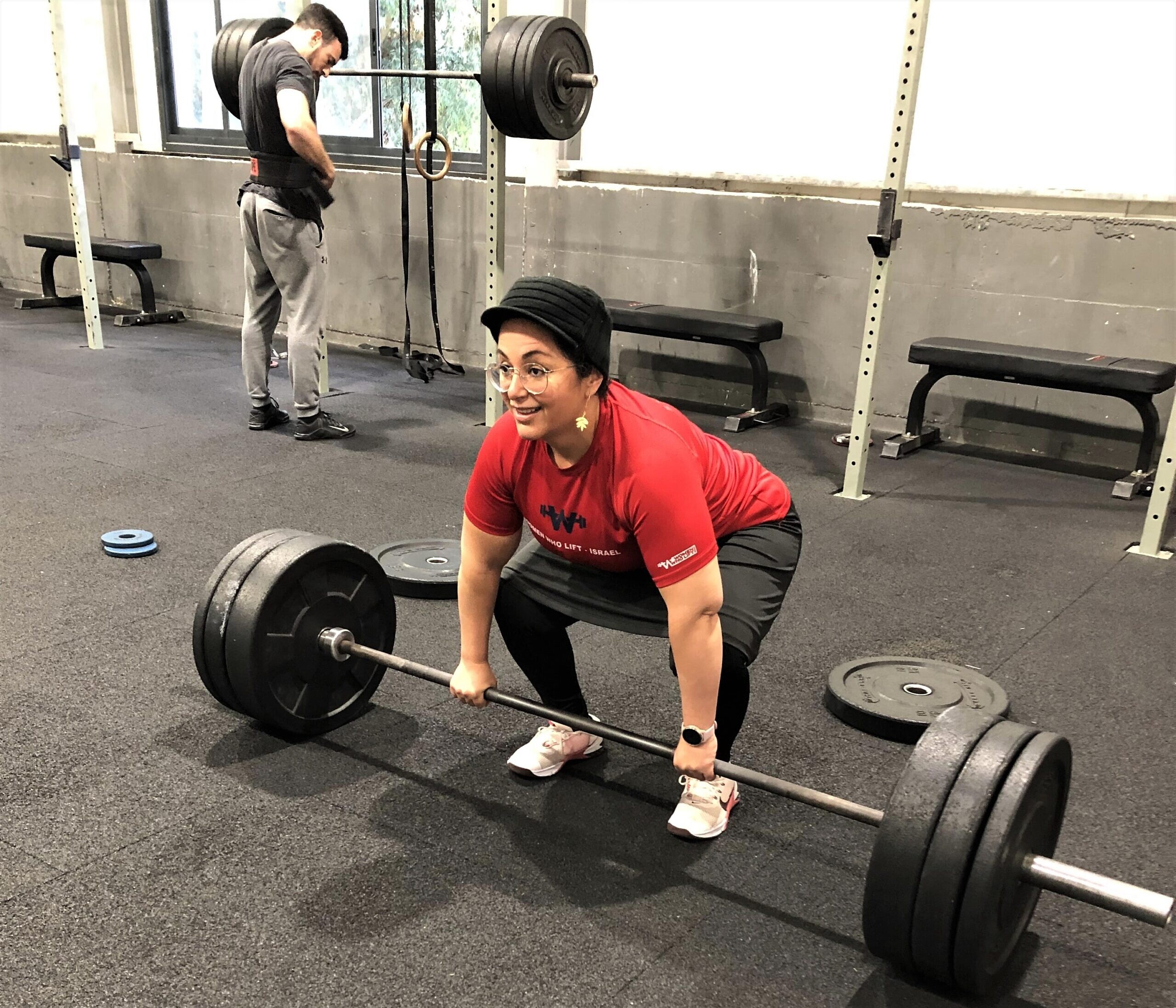 “We have so many talented women who could compete professionally, hiding behind the curtains without the chance to compete,” said Illouz. “Our competition will give them equal opportunity to compete officially with the International Powerlifting Federation and follow their passion. … This competition will make sure no woman is excluded from following her dreams.”

According to Illouz, a Modern Orthodox Jew, powerlifting empowers women by allowing them to uncover their incredible physical and mental strength without sacrificing their religious observances by uncovering their bodies. This is particularly important for women in very traditional circles.

“It not only makes them stronger physically but stronger mentally, and builds their self-confidence,” said Illouz, whose perspective changed from the negative mentality of diet culture and weight loss to strength training. A software engineer, she noted that the confidence gained from “being able to squat 100 kilos” (220 pounds) spreads to all facets of her life, including her work, as she truly believes she can achieve difficult tasks.

Jewish Orthodox athlete Michal Orlinsky, 34, shared a similar sentiment, saying “sport is a way to impart values and build personal qualities of consistency, perseverance, dedication and coping with difficulty. … I love the feeling of self-confidence and sense of ability I achieve through lifting.”

This is most important for religious women, who are often mentally and physically overwhelmed with their duties in and outside the house, she related, and often don’t focus on themselves.

When Illouz brought Orlinsky to watch a powerlifting competition, Illouz recalled “seeing the fire in her eyes” when she couldn’t compete, knowing that “she could crush every woman there.” In fact, she was crying. This inspired Illouz to organize the May 27 meet, in which Orlinsky will be competing and co-organizing.

“Without this opportunity,” Orlinsky shared with JNS, “I wouldn’t even think of competing. For a religious woman, it doesn’t even cross your mind because of the way competitions are structured today. This allows me to go public with what I love to do most and show the world another side to the religious woman … Orthodox women participate in this kind of sport and the religion is not supposed to limit [participation].” 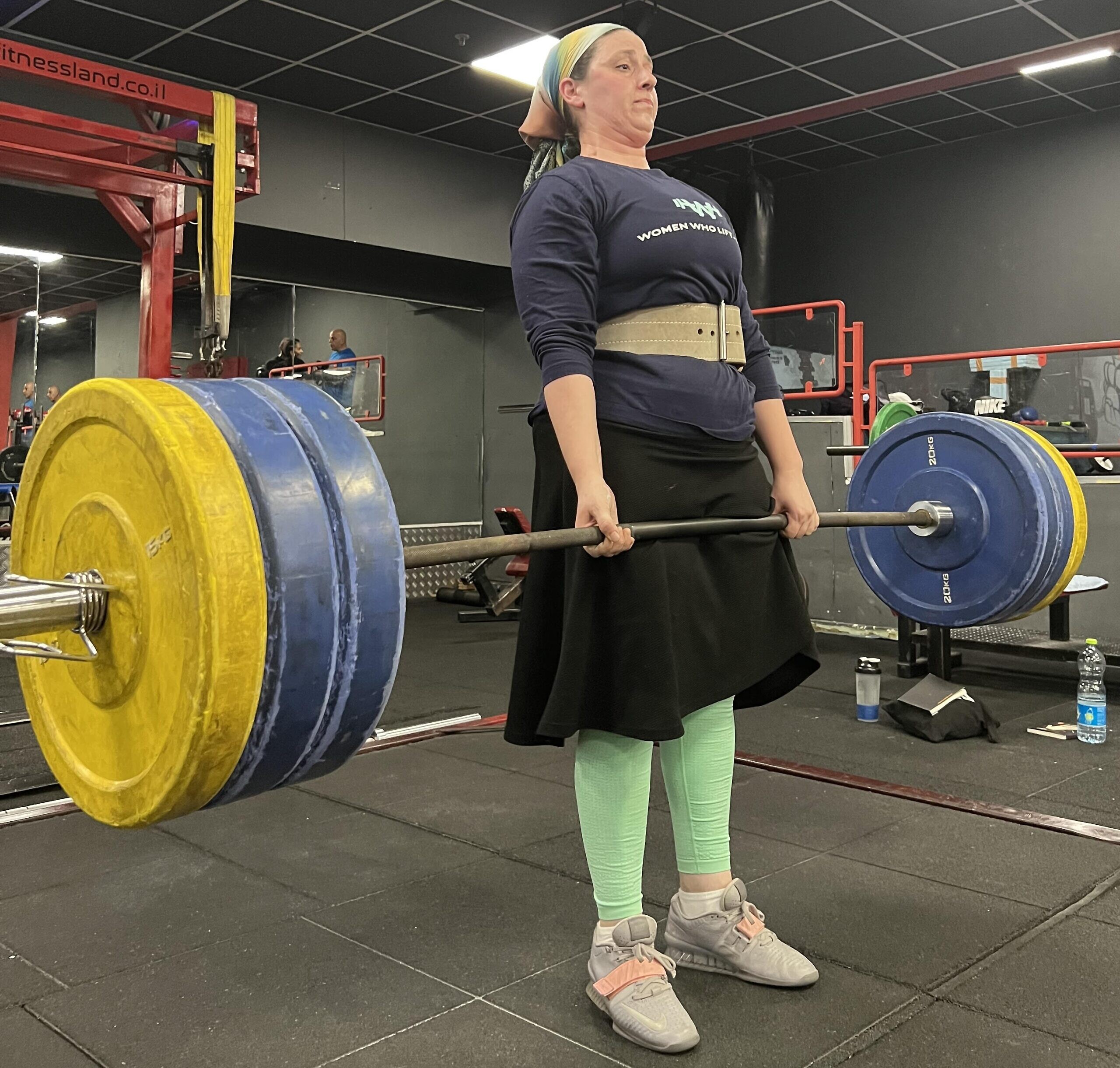 ‘Once you cross that bridge, it’s never the same’

Iris Schechter, a three-time gold medalist representing Israel in powerlifting internationally, will act as a judge and is on the meet’s organizing committee. Though originally against the idea of separating men and women in sports—and at first rejecting Illouz’s idea—she said that she agreed to join after “witnessing Michal’s training videos and realized how strong she is, how many resources she put into her training and how passionate she is about the sport.”

“As a woman who did in her life whatever she wanted, especially in sports, it was hard for me to see women who are restricted from [achieving] their dreams. I deeply appreciate the coaches and [athletes] who encouraged me to run this event and [helped me] understand the constraints religious sportswomen face.”

Strength and CrossFit coach Efrat Lev, co-organizer of the May 27 competition, said she had to compromise her observance of modesty in order to compete. As an Orthodox Jew, the 39-year-old recalled leaving her skirt on a “white plastic chair in the corner. I had left it on until the last possible moment. It was my first time baring my legs in front of so many men, and it was the last time I would feel so self-conscious about it. Because once you cross that bridge, it’s never the same. And while some will say that’s a good thing, those who share my values will understand that there’s an element of sadness and loss in that.”

“It was not an easy decision at all,” she told JNS. “That’s why I am so proud to take part in organizing a sanctioned competition that will allow other women to compete without having to make the same sacrifice that I had to make.”

Lev first began lifting after she had a difficult pregnancy and learned that resistance training with progressive overload is crucial in preventing physical deterioration and diseases such as osteoporosis, a common ailment of her older female clients. “It is never too late to start,” she said. “When I first started lifting, I never imagined that I would be able to lift my own body weight. Today, I am on the road to lifting triple that amount.”

Illouz, Orlinsky, Lev and Schechter found a sponsor for the event: Israel’s sporting goods distributor Salsport. Owners Irena and Kobi David-Pour have donated Eleiko brand weightlifting equipment for the competition. “When we heard about the first powerlifting competition in Israel for women, we were very excited,” Irena told JNS. “We believe that the time has come for more women in Israel to be exposed to powerlifting and take part in it.” 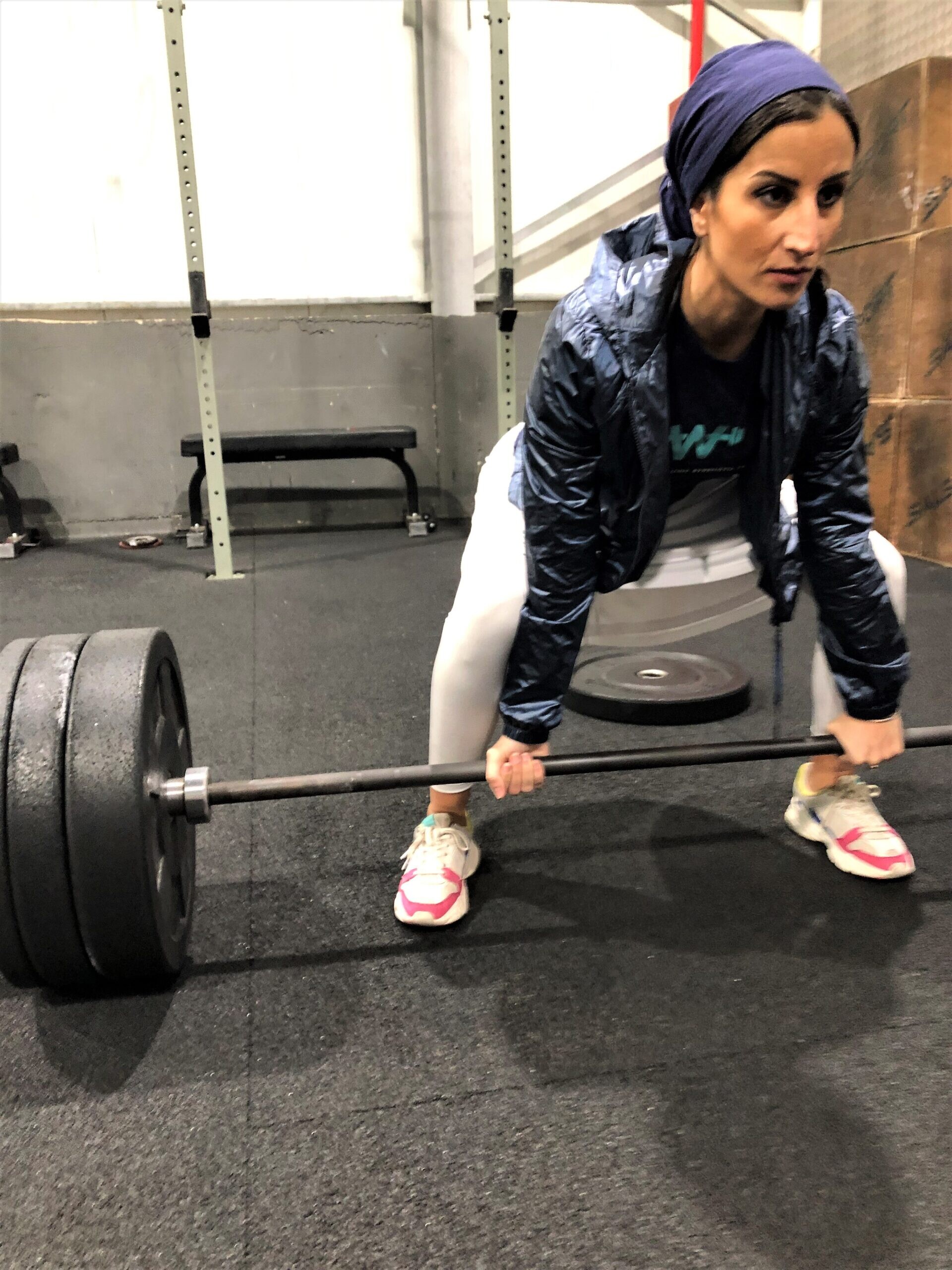 Indeed, women from all over Israel are set to participate, and religious Jews are not the only ones competing.

Hana Halabi, 47, a Druze fitness instructor and owner of a health club in her village of Daliyat el-Karmel, told JNS that the women-only competition is an opportunity and an inspiration for women of all backgrounds to “know their strength without the fear or worries of men being around judging them.”

As a religious fitness professional, she noted “there is nothing religiously or socially forbidden or unacceptable in weight training.”

And while many women might be concerned that weightlifting “will make them look masculine,” Halabi remembered “feeling like a queen conquering a new world with a smile and insane energy” when she began lifting. Bringing the field of sports to the village, she said, has “upgraded the lives of women and men in the village” and caused a revolution of mindset.

“I love powerlifting and the power, motivation and readiness [it brings] to achieve goal after goal,” she said.

Schechter, though originally against the idea of a women’s only meet, has not only had a change of heart but called on “every woman, spectator or competitor of any level to come celebrate with us.”