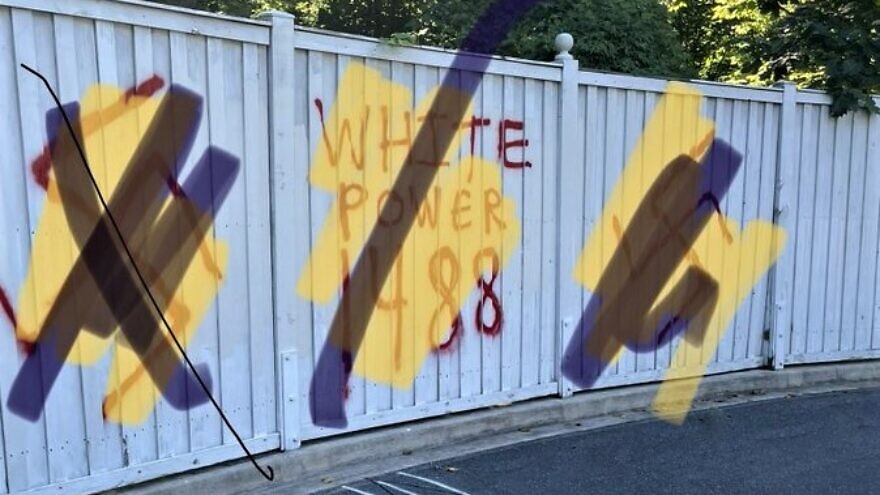 (August 8, 2022 / JNS) Anti-Semitic graffiti was found spray-painted over the weekend on a fence at a trolley trail in Montgomery County, Md., just outside of the nation’s capital.

“Hate has no place in our community,” tweeted State Delegate Ariana Kelly (D-District 16), who posted an image of the graffiti on Sunday. “I have heard from a number of constituents this a.m. about white-nationalist vandalism along the Bethesda Trolley Trail.”

Kelly’s photo, which she “modified” to make it harder to see the hateful imagery, showed swastikas along with the numbers “1488” and “88” painted on white fencing at the Bethesda Trolley Trail.

On Twitter, the watchdog group StopAntisemitism.org explained the relevance of the graffiti calling it “atrocious white-supremacist references.”

“What is ‘1488’? Fourteen words, ‘We much secure the existence of our people and a future for white children,’ ” the group tweeted. “88, H is the 8th letter of the alphabet,” and it stands for “Heil Hitler.”

This follows several incidents in early June, including hate-filled fliers with swastikas pasted on a bus stop across the street from a synagogue in Silver Spring, Md.

According to the Montgomery County Police Department 2021 Annual Report of Bias Incidents, there were 34 incidents motivated by bias towards religion in the county last year. Of those, 85.3%, or 29 of them, “were considered anti-Jewish, despite Jewish persons making up only 10% of the population,” said the report.