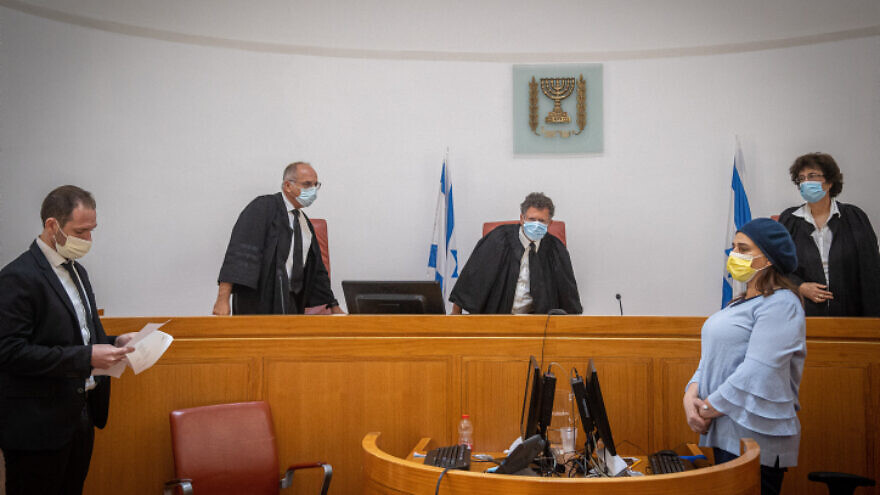 (August 4, 2021 / JNS) In what can be seen as an eyebrow-raising moment, Israel’s Supreme Court on Monday noted that the Jewish owners of properties under dispute in the Shimon HaTzadik neighborhood of Jerusalem, which is often erroneously mixed up with the adjacent Sheikh Jarrah neighborhood, are within their legal rights to evict the illegal Palestinian squatters, but is pushing to find a solution that allows them to remain in the homes.

According to legal experts, Israel’s Supreme Court has allowed outside pressure to influence its decision. What should be a strictly legal decision seems to have become emotional—a consideration that is supposed to remain outside the purview of the court.

Eugene Kontorovich, a scholar at the Kohelet Forum think tank in Israel and professor at George Mason University, told JNS that “it is very important that the comments made by the judges at the hearing show that they have no question that the Jewish property owners have the complete lawful title.”

“There is no legal question that they are the property owners,” he said.

However, while the Nahalat Shimon Company, which in 2003 bought the Sheikh Jarrah property where the families live, wants the squatters evicted, the judges seem intent on finding a compromise that allows them to remain.

Still, there is no legal basis for this, and it remains clear the properties belong to the rightful Jewish owners.

As international lawyer Arsen Ostrovsky has documented, “the land in question was purchased by the local Ashkenazi and Sephardi communities from its Arab owners in 1875.”

“In 1982, the Jewish owners [Sephardic Community Committee and the Knesset Israel Committee] sued the Palestinian families residing in Sheikh Jarrah and demanded their eviction on the basis that they were squatters on the property. The Magistrate Court determined that the Palestinian families could not demonstrate their ownership of the property, but that they enjoyed Protected Tenant Status. As protected tenants, they would be able to continue living on the property as long as they paid rent and maintained the property. … Beginning in 1993, the trusts began proceedings against the residents based on their non-payment of rent and of illegal changes to the property.”

Kontorovich lamented what he said is the court’s effort to “reduce the property owner’s rights simply because they are Jews,” and he decried the judges’ seeming left-leaning bias when ruling on sensitive political issues. 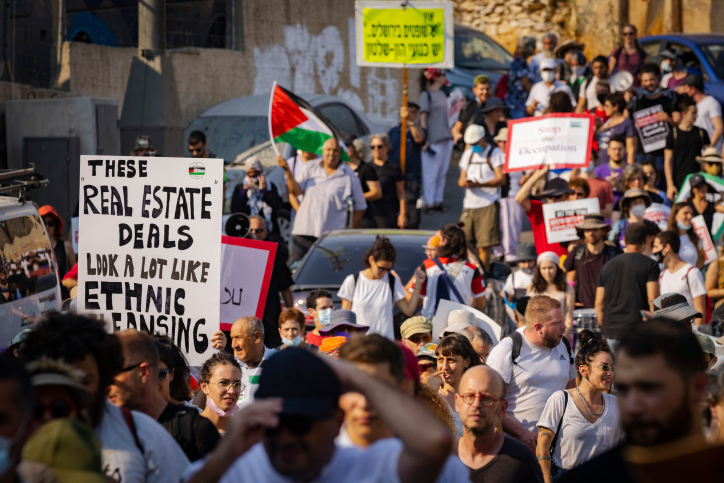 Protesters demonstrate against Israel’s plan to demolish some houses of Palestinians in the eastern Jerusalem neighborhood of Sheikh Jarrah on July 30, 2021. Photo by Olivier Fitoussi/Flash90.

He said it is “distressing” to see that the court’s judges appear to be influenced by diplomatic pressure and the fear of further attacks by Hamas in the Gaza Strip, similar to the kindling that lit the 11-day conflict in May that saw more than 4,000 rockets launched into Israeli population centers.

“They are not supposed to take into account anything outside the courtroom, but they obviously feel the pressure,” he noted.

The judges’ unwillingness to outright evict the squatters “shows they are very ‘brave’ in taking decisions based on what they call purely the law that will upset much of the Israeli public, but when it comes to upsetting the international community or Hamas, they lack that courage,” said Kontorovich.

‘The court’s job is very simple’

Avi Bell, a professor at the University of San Diego School of Law and at Bar-Ilan University’s Faculty of Law, slammed critics who “claim that the Israeli government should (or even that international law requires it to) deny the owners their property rights, but these claims are not based on any credible legal argument. They focus on the fact that the owners in the disputed cases are Jew, while the squatters and overstaying tenants are Arabs. The critics demand that Israel discriminate against and disregard the property owners’ lawful property rights due to their Jewish ethnicity.”

“If they do this, it means Hamas won the war, big time,” he added.

According to Kontorovich, the Supreme Court is essentially allowing Hamas to fire rockets indiscriminately and exert pressure on Israel’s leadership, and ultimately, change property laws in Jerusalem. “But the court’s job is very simple,” he explained, and that is “to determine whether the Jewish plaintiffs own this property, and if so, there are rules about what you can do with your property.”

Moving forward, Kontorovich said he believes that the court will “put forward some kind of proposal to say it is upholding the law, but get the Jews to accept less than the law will give them.”

He predicted that the court’s proposal would be “rejected” by the Jewish property owners.

‘A capitulation of the legal system in Israel’

Chaim Silberstein, head of Keep Jerusalem, a nonprofit organization that works to highlight the importance of a united Jerusalem under Israeli sovereignty, told JNS, “The compromise that was suggested at the Supreme Court hearing is not really a compromise. It is a capitulation of the respected legal system in Israel, at the highest level to political and ideological pressure from the extreme left.”

Like Kontorovich, Silberstein also expressed his disappointment in the judges’ left-leaning bias, and who, in his opinion, “trample” on the rule of law, which is “judiciously applied against Jews when their eviction is required by the liberal elites.”

Silberstein slammed the Palestinian squatters, who he said “defiantly refuse to pay rent despite generous offers of compromise from the legal Jewish owners.”

In his view, “the just and correct result of this court case should be the immediate eviction of illegal squatters from properties they have withheld from their rightful owners for decades.”

“The court now has the chance to prove that it rules purely according to the law and that justice is blind,” stated Kontorovich. “The question is: Will it rise to the challenge?”