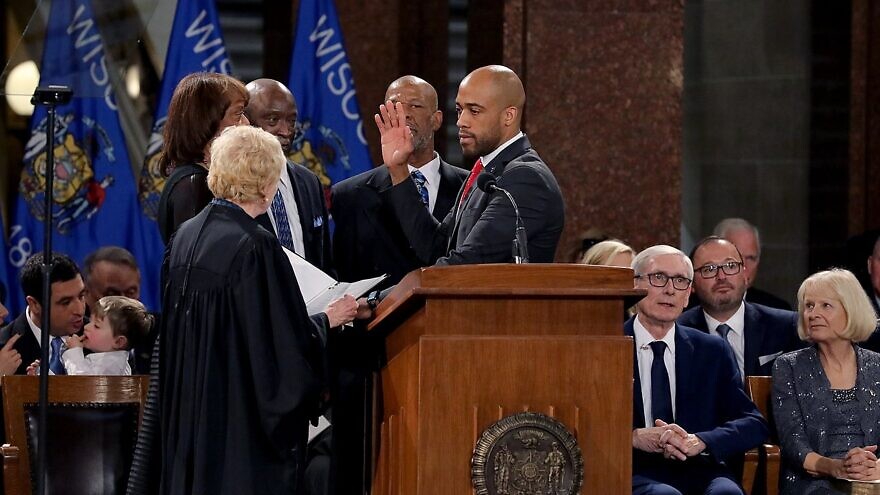 (November 2, 2022 / JNS) The party out of power usually does well in American midterm elections, but until recently, incumbent Sen. Ron Johnson (R-Wis.), bidding for a third term, trailed his challenger from across the aisle.

The latest surveys now show Johnson with a slight lead over Democratic challenger Lt. Gov. Mandela Barnes, but still within the margin of error.

For many around the U.S., the importance of the race rests not only in who will control the Senate—as, despite Johnson’s lead, the race is still very much in play—but in the threat that the highly progressive political positions of Barnes would mean the election of an anti-Israel senator.

A Fox News poll conducted from Oct. 26 to 30 showed Johnson leading by 2 points. From the state’s Aug. 9 primary to mid-September, polls showed Barnes with a consistent advantage over Johnson, reflecting nationwide fervor over the U.S. Supreme Court’s decision to overturn Roe v. Wade. Over the ensuing weeks, that fervor appears to have died down in importance compared to continued skyrocketing inflation.

While Jews do have a historic community centered around Milwaukee, they make up a tiny percentage of the state’s electorate. That didn’t stop the state from electing a Jewish senator in 1993, former Sen. Russ Feingold (D-Wis.), who went on to serve the state for nearly two decades until he was defeated by Johnson in 2010 and was even touted as a candidate for president.

As lieutenant governor, Barnes has a good relationship with the Jewish community, but statements he has made on Twitter going back many years are coming back to haunt his candidacy.

As Hamas rockets rained down on Israel in May 2021, Barnes tweeted: “Normalize saying Free Palestine.”

“We cannot be more comfortable with chaos and the deaths of innocent children than we are with those two words,” he continued while retweeting an op-ed by Sen. Bernie Sanders (I-Vt.). “There’s a lot of history and context, but this approach has not previously brought about a resolution, and it won’t now. Innocent people on each side deserve a ceasefire.”

Barnes has also been suspected of supporting the Boycott, Divestment and Sanctions movement, having previously been a member of the anti-Israel group Peace Action Wisconsin, a branch of an organization that supports BDS, defends Palestinian terrorist groups and lobbied for diplomacy with Iran and North Korea.

Barnes, who has been endorsed by JStreetPAC, did not respond to multiple requests from JNS to clarify his positions on Israel, but he expressed a pro-Israel stance during a virtual forum held by the Jewish Democratic Council of America in June.

At the forum Barnes, who visited Israel 10 years ago, said that he would have supported the Memorandum of Understanding (MOU) on defense assistance to ensure Israel’s security and would have voted for supplementary funding for Iron Dome interceptor rockets. He denied supporting BDS and also said that the United States should be involved in ushering in the two-state solution, as he sees it as the only viable path for peace between Israelis and Palestinians.

While the Johnson campaign also did not respond to requests from JNS for the candidate’s Israel platform, his pro-Israel record in the Senate has been exemplary and netted him the endorsement of AIPAC’s political action committee.

Despite his support for Israel, Johnson’s relationship with the Jewish community at large has not been stellar in the past few years.

A strong supporter of President Donald Trump, Johnson was one of the top GOP senators who believed the 2020 election was stolen from the former president, signing a letter that he would not vote to certify the election. His chief of staff, according to The Washington Post, tried to deliver a slate of fake electors supporting Trump to Vice President Mike Pence.

Interviewed on a radio show after the events of Jan. 6, 2021, Johnson said that he wasn’t concerned about the rioters at the U.S. Capitol.

“Even though those thousands of people that were marching to the Capitol were trying to pressure people like me to vote the way they wanted me to vote, I knew those were people that love this country, that truly respect law enforcement, would never do anything to break the law, and so I wasn’t concerned,” he told conservative radio host Joe Pags. “Now, had the tables been turned—Joe, this could get me in trouble—had the tables been turned, and President Trump won the election and those were tens of thousands of Black Lives Matter and Antifa protesters, I might have been a little concerned.”

U.S. Special Envoy to Monitor and Combat anti-Semitism Deborah Lipstadt, who was at that time not yet nominated for the role, tweeted in response to Johnson’s statements: “This is white supremacy/nationalism. Pure and simple.”

This back and forth led to a months-long delay in Lipstadt’s confirmation by in the Senate Foreign Relations Committee, with Johnson objecting to her nomination, while Jewish organizations throughout the U.S. were expressing concern over rising anti-Semitism and calling for Republicans on the committee to end the stalling.

Marc Sommer, chairman of the To Protect Our Heritage PAC—a bipartisan, pro-Israel PAC based in Illinois—said Johnson’s support for Israel throughout his time in the Senate was enough to earn the group’s endorsement.

The To Protect Our Heritage PAC has a friendly incumbent rule, meaning that incumbents receive priority in an endorsement when their record shows that they have been supportive of Israel, even if the opposing candidate’s record is equally pro-Israel.

The group also supported Johnson in his previous campaign, when he was 19 points behind in the polls.

“We supported him because he was the candidate that we felt was the best for the U.S.-Israel relationship,” Sommer said. “He prevailed and during the last six years, he has been extremely supportive of a strong relationship, and therefore we are supporting him again.”

Barnes, he added, didn’t have a record on Israel, which is one of the reasons the group’s research committee went with the known entity.

He may not have had an explicit record on Israel, but Barnes’s past comments and affiliation with BDS were troubling for the PAC.

Kyle Kondik, the managing editor of the Sabato’s Crystal Ball newsletter at the University of Virginia’s Center for Politics, said that while the race is anything but certain, it’s Johnson’s to lose.

“As a Republican incumbent running in a Republican-leaning year in a marginal state, that’s a good position to be in without taking into account some of Johnson’s own problems,” Kondik told JNS. “I don’t think that Barnes has been that great of a challenger. I mean, he had some kind of obvious liabilities in terms of some left-wing views on something that I sort of figured Republicans would be able to weaponize against him and I think that they have.”

These liabilities include Barnes’s far-left views such as calling for reducing police funding, bail reform and liking tweets that called for the abolition of U.S. Immigration and Customs Enforcement (ICE).

“I’m not making a value judgment about it one way or the other, it’s just that Republicans have used that in their advertising and the guess is that to the extent it had an effect, it’s been a negative one on Barnes,” said Kondik.

He said that Democrats had a “polling honeymoon” in August, surprisingly winning a few special elections, but it looks like things have returned to normal. Still, it matters what the electorate will look like this time.

Wisconsin’s electorate is overwhelmingly white, with generally fewer black voters than other midwestern states such as Michigan and Illinois, Kondik noted. It also has a high proportion of voters without a four-year college degree compared to the national average—a group that Democrats have lost to Republicans in recent years.

“To me, it’s less about Barnes and Johnson themselves than just the political world in which we’re living right now,” Kondik said.