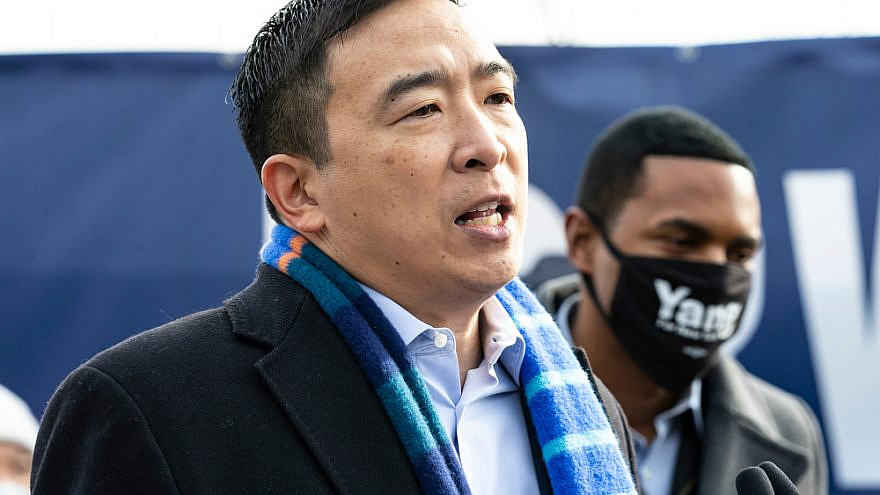 (May 13, 2021 / JNS) Democratic candidate for New York City mayor Andrew Yang apologized on Wednesday for saying that he supports Israel’s right to defend itself against an onslaught of rocket fire from Hamas in the Gaza Strip.

Yang, 44, posted a statement on Twitter after facing a backlash for saying on Monday night: “The people of NYC will always stand with our brothers and sisters in Israel who face down terrorism and persevere.”

In a new Twitter post, he wrote that volunteers for his mayoral campaign “were upset with my recent tweet expressing solidarity with the people of Israel. … They felt that my tweet was overly simplistic in my treatment of a conflict that has a long and complex history full of tragedies. And they felt it failed to acknowledge the pain and suffering on both sides.”

“They were, of course, correct,” he said. “I mourn for every Palestinian life taken before its time as I do for every Israeli. … Support of a people does not make one blind to the pain and suffering of others.”

Yang’s original tweet sparked #YangSupportsGenocide; as a result, Muslim organizers canceled a pre-planned food drive with him to mark the end of the holy month of Ramadan, reported the New York Post.

Rep Alexandria Ocasio-Cortez (D-N.Y.) attacked the candidate for his “chest-thumping statement” in support of Israel. And Talbert Swan, a leader of the National Association for the Advancement of Colored People, tweeted about Yang: “The systemic oppression, institutional discrimination and violent persecution of Palestinians are crimes against humanity. It is wicked, evil and inhumane. Glad to know where you stand.”