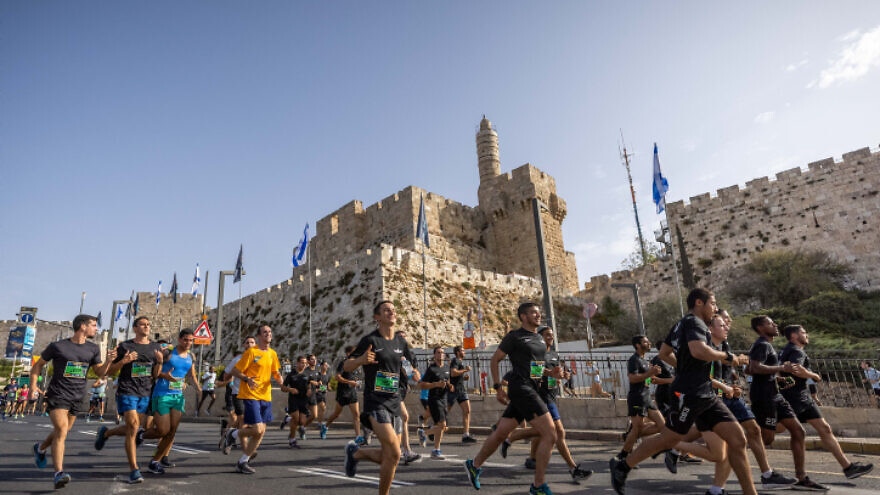 (November 1, 2021 / JNS) Before dawn on Friday, Jerusalem streets were blocked to vehicular traffic and ready for pedestrians—well, running ones, that is. The sound of loudspeakers blasted from their location near the Israeli Knesset and Israel Museum to announce the long-awaited Jerusalem Winner Marathon, which was off and running.

Until now, the guidelines of the Israeli Ministry of Health and new Green Passport regulations had limited outdoor events to 5,000 people. The Oct. 29 marathon was larger, but the law was changed in time to allow the race to proceed. Last year’s competition was canceled due to the pandemic.

Naama Constantini, a specialist in family and sports medicine, and Heidi Rothberg, director of the Sports Medicine Center at Shaare Zedek Medical Center in Jerusalem, who has overseen safety at the marathon over the years, said a contingency plan was in place to partition the park into sections and limit groups to 5,000 if it became necessary.

At 6:45 a.m., Jerusalem Mayor Moshe Lion launched the half-marathon heat from the starting line, and at 7 a.m., the full marathon began. Along with the thousands of runners, this year for the first time Lion himself participated, running with the number “10” at the end of the 10K accompanied by his discreet security detail. 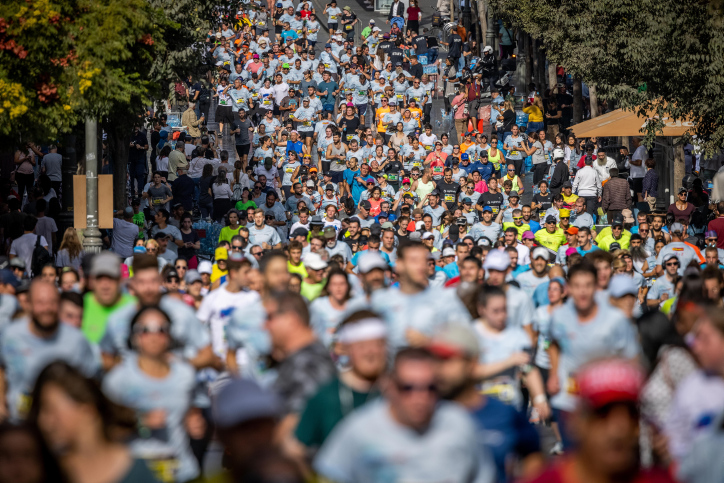 Thousands of runners take part in the annual marathon in Jerusalem, Oct. 29, 2021. Photo by Yonatan Sindel/Flash90.

“Since its establishment a decade ago, the Jerusalem Marathon has become an important experience for every runner in Israel and around the world,” he said. “I am proud that we were able to sustain it with great success. Jerusalem today warmed up its engines. Participants of all ages came to take part in the largest sporting event in the country. I congratulate the marathon runners and wish everyone a happy marathon holiday.”

‘One of our flagship events’

Yamar Gethon, 29, from a Jerusalemite from the Katamon neighborhood, took first place in the full marathon, setting a record time of 2:24:07. He arrived at the finish line well before the next runners. Gethon broke the Israeli record in the Jerusalem Winner Marathon. At the recent Berlin Marathon, he finished in 10th place. Second place went to Ajaz Guadi, 32, with a time of 02:29:49, and Barhan Balata, 50, came in third at 02:41:20.

Following the awards ceremony, she had to leave the podium quickly to go to a school event. (However, the American-born Deutsch took time to pose for photos for JNS and a few avid fans.) Her win was impressive as she also participated in the Berlin Marathon held at the end of September. After serious training, she became ill during the race but still completed it. Afterwards, she was diagnosed with COVID-19, so she was very pleased to have recovered in time to participate in the Jerusalem race.

This year, international visitors were limited by COVID restrictions. Locals were enthusiastic and happy to be back outside, running and enjoying the activities in the park, raising money for charity and seeing friends again. Plans are already underway for the 11th International Jerusalem Marathon next March.

Deputy Mayor Fleur Hassan-Nahum told JNS, “We are so happy to host the return of one of the flagship events of our wonderful city Jerusalem. The marathon represents the city getting back to life, and very soon, we hope that this will include our wonderful tourists.”