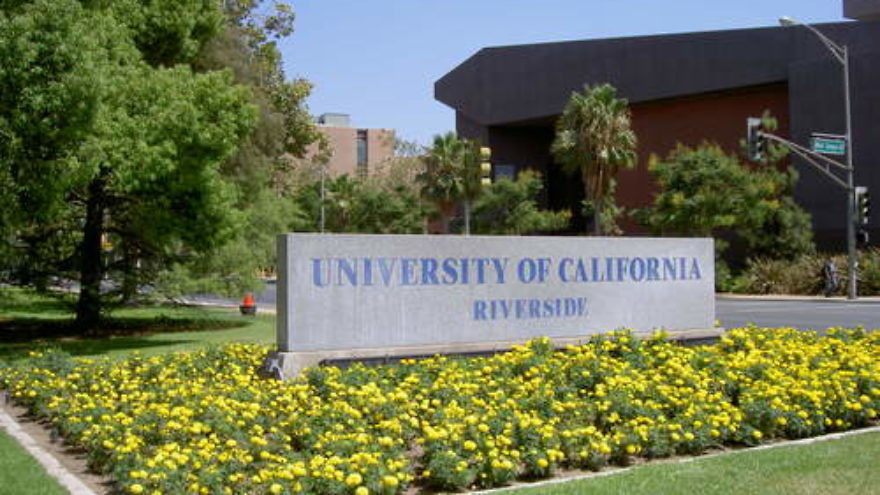 (April 20, 2015 / JNS) There has been no shortage of anti-Semitic incidents on college campuses during the past academic year, especially within the 10-school University of California (UC) system. As Jewish students deal with Holocaust imagery and student governments taking issue with their Judaism, UC Riverside (UCR) is offering a class cited by 20 watchdog and advocacy organizations as meeting the U.S. State Department’s definition of anti-Semitism.

“The course schedule is filled with egregiously one-sided, anti-Israel readings and films that falsely paint Israel as a settler-colonial and apartheid state, hold Israel to a double standard to which no other democratic country is held, vilify and demonize Israel and Israel’s supporters, and argue for an end to the Jewish state; these tropes are all considered anti-Semitic according to the U.S. State Department’s definition of anti-Semitism,” wrote the 20 organizations in a letter to UCR Chancellor Kim Wilcox.

“Anti-Semitism on California’s campuses is escalating rapidly and those of us who care about the safety of Jewish students are gravely alarmed. And now we discover that UC Riverside is offering an anti-Semitic course taught by a student leader (Tina Matar) of Students for Justice in Palestine, a group dedicated to the elimination of the Jewish state and activities our government calls anti-Semitic,” Tammi Rossman-Benjamin—co-founder of the AMCHA Initiative, an organization dedicated to combating campus anti-Semitism—told the Haym Salomon Center. “This class was approved by the university review board. How does this happen? Disturbingly, this is only the latest incident of anti-Semitism at UC Riverside. “

Rossman-Benjamin continued, “Last year, UC Riverside used official university funds to sponsor events featuring Omar Barghouti, the founder and most vocal advocate of the Palestinian Campaign for the Academic and Cultural Boycott of Israel. Students in eight courses were given credit for attending and listening to Barghouti’s anti-Israel propaganda recognized by the U.S. State Department as anti-Semitic. Invoking the class blood libel, Barghouti accused Israeli soldiers of ‘hunting children,’ claiming that sharpshooter Israeli soldiers target Palestinian children and shoot to kill. Chancellor Wilcox must put a stop to this anti-Jewish bigotry and discrimination immediately. Jewish students’ safety is at stake.”

When asked for comment from Chancellor Wilcox, UCR said the chancellor was out of the country and unable to immediately respond. Kris Lovekin, the school’s director of media relations, told the Salomon Center, “The course ‘Palestinian Voices’ was reviewed by a faculty committee here and that committee decided that it did meet UC standards. This series is a student led course. You can see all of them listed here: http://rcourses.wix.com/spring2015. Here is the UC policy that is relevant: http://regents.universityofcalifornia.edu/governance/policies/2301.html.”

Lovekin said UCR “will review if there is an appeal process within the system for course approval.”

“As a leading public research university, UC Riverside is committed to the principle of academic freedom and to the open exchange of ideas that is at the heart of academic discovery and scholarship,” said Lovekin. “We believe that our faculty and students, and those elsewhere, must be free to communicate and work with others across the U.S. and around the world.”

Lovekin also cited a statement by Janet Napolitano, former U.S. secretary of homeland security and currently the UC system’s president, who said, “Universities depend on the unrestrained exchange of ideas, and it is our role to defend academic freedom and our scholars’ ability to pursue research of their choice. An academic boycott goes against the spirit of the University of California, which has long championed open dialogue and collaboration with international scholars.”

Requests for comment from Tina Matar, the undergraduate student teacher of the controversial UCR class, and English professor David Lloyd, the faculty sponsor for the course, were not immediately returned. The AMCHA Initiative noted in a press releases that Lloyd “makes no secret of his animosity towards Israel” and is “an international leader of the BDS (Boycott, Divestment and Sanctions) movement and the founder of the U.S. Campaign for the Academic and Cultural Boycott of Israel.”