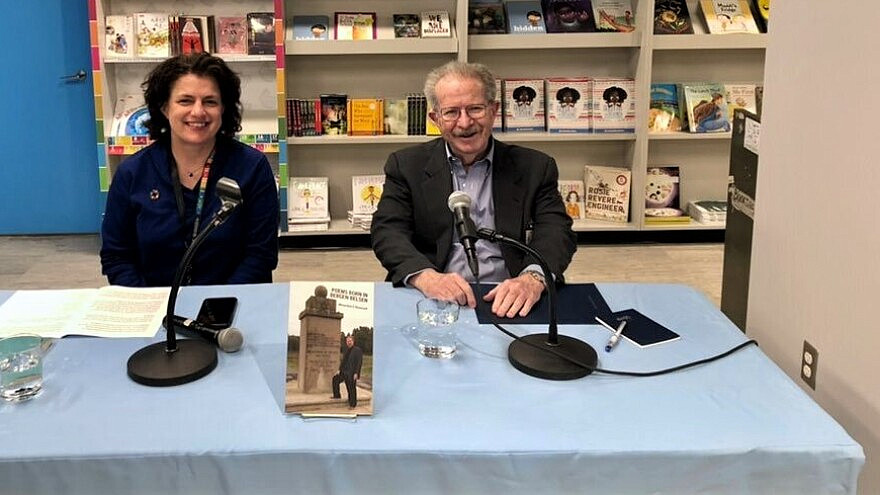 (April 29, 2022 / JNS) For some, the issue never fades from memory. Menachem Rosensaft was born in 1948 in Bergen-Belsen, a Nazi concentration camp turned into a displaced persons camp after the war. His parents somehow survived the German Nazi onslaught of World War II and the Holocaust, but his half-brother, Benjamin, did not.

All these years later, Rosensaft released a book of poetry in 2021 called Poems Born in Bergen-Belsen, articulating his journey as the son of Holocaust survivors with the hope to sensitize readers to the horrors of the Holocaust and inspire empathy for all survivors of genocide.

On the eve of Yom Hashoah on April 27, the United Nations Outreach Programme on the Holocaust hosted Rosensaft at a book-signing and discussion event at the U.N. Bookshop.

JNS recently sat down with Rosensaft to reflect on his book. This interview has been edited for brevity and clarity.

Q: Thank you so much for joining us. This book is gut-wrenching at times, and at other times seems somewhat hopeful.

A: I actually have been writing poetry for the better part of the past 50 years. So, these poems have been in the making over an extended period of time, and they really are my way of communicating with the dead, relating with the dead and also in a different dimension communicating with God, coming to terms with God. So, it’s my way of coming to terms with an experience that is part of my identity, which is not really relatable in terms of simple historical chronology and facts and events.

You do not get the scope of the Shoah, of the Holocaust, or, for that matter, of any kind of genocide by simply relating it to so and so many people—6 million people died—and then relating to how many people died in Auschwitz, how many people were murdered in the Warsaw Ghetto. So as far as I’m concerned, it’s my way of trying to deal with this part of my history through poetry, to try and imagine what happened, how it happened, to try and imagine the ghost of a 5 1/2-year-old boy—my brother, my mother’s son—who was gassed together with his father—my mother’s first husband—and his grandparents upon arrival at Auschwitz. 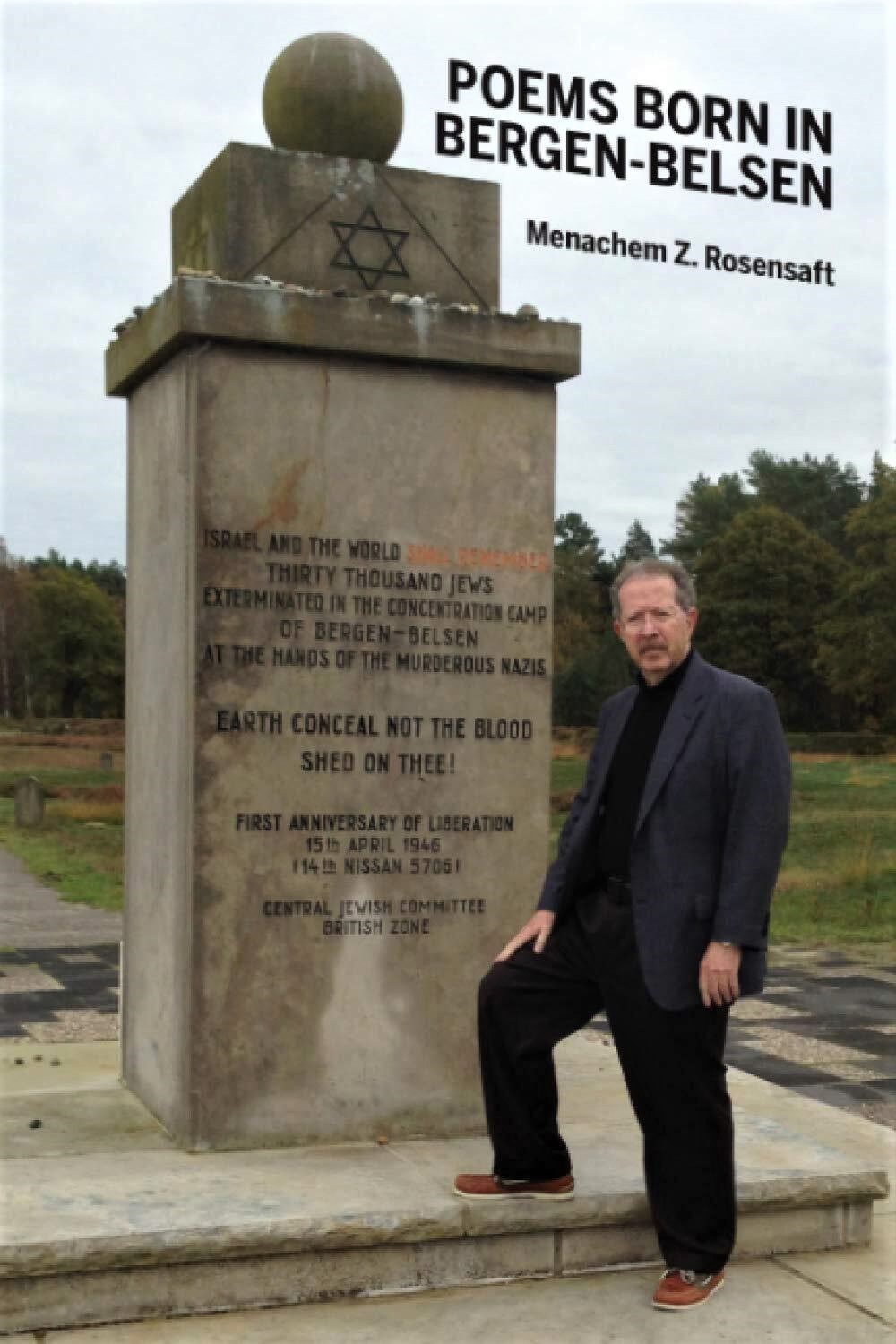 This is a brother I never knew, but who is very much a part of me. And I can only imagine that his soul, his ghost, is still there in Auschwitz-Birkenau—is still there among the barracks, among the ruins of the crematorium, the gas chambers. And this is my way of relating to him and hopefully making his memory a part of the collective memory of the Jewish people and of humankind.

Q: Talking about ghosts: It’s a very prevalent topic within the poetry in this book. Are you talking about the ghosts that haunt you and Holocaust survivors? What is the message in that particular term?

A: I was born in [the] Bergen-Belsen [displaced persons camp], which was set up about a kilometer away from where the concentration camp had been. And our generation of the sons and daughters of survivors are haunted. We are haunted much in the way that a cemetery is haunted. We carry within us the images, the souls, the ghosts, as it were, of those who were murdered and whom we only know through the recollections that we received about them from our parents. Everything else is left to our imagination.

When I talk about ghosts, I talk about images in my mind of those who perished. And it can be the image of a child going into the gas chamber and trying to relate to his pain, his agony, or what happened to his soul afterwards. And what happened to the souls of the 1.5 million children who were murdered or, for that matter, of the 6 million who were murdered. Where are they? And everything after that is simply a matter of one’s imagination. In my case, I try to express it through poetry.

Q: There are religious connotations in your work. You include the opening and closing prayers for Yom Kippur; you intersperse lines of the Mourner’s Kaddish into one of your poems. Yizkor, the memorial prayer, is also featured prominently. What is your relationship with God? So many Jews who somehow made it through the Holocaust either turned their backs on Judaism completely or at least the religious aspect of it. You seem to be religiously connected but angry with God. What is that relationship like at this point?

A: I believe in God; I’m a committed Jew. I’m not Orthodox. I happen to be a conservative Jew; I believe in God, but that does not mean that I believe in an omniscient and all-powerful God. Because if I did, then how can one believe in a God who knew that millions were being murdered and who could have stopped it, but didn’t? But then again, there is also an arrogance on the part of all of us, including rabbis, who try to say that we know who God is or how God manifests himself or herself. We don’t know. We only believe we know, and that is, in my view, an arrogance.

And so, I get into a conversation with God and an argument with God. Of course, one has to express it, but that’s in a Jewish tradition. There was a Chassidic master, Levi Yitzchak of Berditchev, who was known for arguing with God on behalf of the Jewish people. He was known to be angry with God, but that does not mean a rejection of God. It simply means that one is in dialogue.

Let me give you an example. We are all familiar, especially when you go to a funeral, with Psalm 23. It is a psalm that talks about God: ​“A Psalm of David. Adon­ai is my shep­herd; I shall not want … Though I walk through the val­ley of the shad­ow of death, I fear no evil for You are with me.” In the psalm, God makes us lie down in green pas­tures and spreads a table for us in the pres­ence of our ene­mies, anoint­ing our heads with oil: ​“Only good­ness and lov­ingkind­ness shall fol­low me all the days of my life, and I shall dwell in Adonai’s house forever.”

Well, this is a difficult, very difficult psalm to relate to in the context of the Holocaust, and so I have my version of it, which is Psalm XXIII at Auschwitz:

That is, rightly or wrongly, my trying to come to terms with reconciling God with a horrific reality, basically saying that God has his place in the debate, just as humans have a great place in the debate. And we are obligated, at least, I think, to take those thoughts and take those concepts and express them in order to effectively make peace both with human beings and with God, then move forward.

Q: You note in a number of your poems more modern-day genocides—places like Rwanda, Darfur. You say that you have to be on guard. You make reference in some of your books about the almost “ho-hum” nature of the Holocaust—not painting Germans and others as bloodthirsty monsters, but just part of a working mechanized system. You refer to a German guard as one just humming music as the killing machines rolled along. What message can you send to the world through your poetry about staying on guard when you know genocide is not always what we picture it to be. It’s something that’s perhaps even scarier in that it can just be so mechanical in nature.

A: Absolutely. The fact is that we have to first and foremost understand that when we commemorate our genocide, which is the Holocaust, we have to be sensitive to others who are suffering from genocide, who were beset with crimes against humanity and with racism. We do not live in a vacuum, and we cannot simply ask others to be concerned about our tragedy if we are not willing to be equally sensitive to theirs.

And you’re absolutely right. The perpetrators of the Holocaust were not visible monsters. They were individuals who went about their daily activities and considered the annihilation—the murder of Jewish men, women and children—to be a part of their job. And that is true of others, whether in Srebrenica, Bosnia, Rwanda, or today, in Myanmar. You have people who are murdering and killing others because of their religious, ethnic, national, racial identity. And they’re doing it without any kind of hesitation. They feel that this is just part of their job and part of the way they’re getting on with things. And by the way, that is also true on the lesser level because genocide does not begin when the killing starts. Genocide begins when racism or religious prejudice, or anti-Semitism or Islamophobia, or a hatred of any minority is allowed to be expressed and people don’t push back. And if one form of discrimination is OK, then the next one becomes easier and the one after that easier. And by the time the murder is in full force, it is far too late to do anything about it.