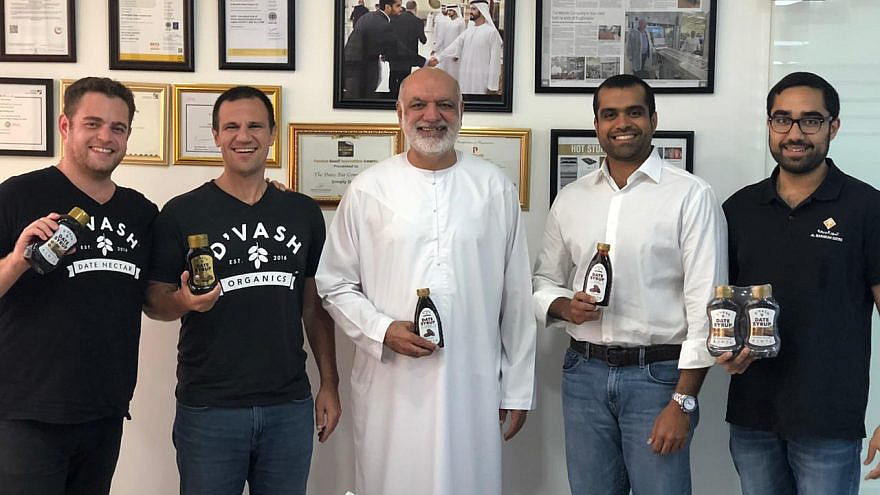 (March 2, 2021 / JNS) The U.S.-brokered normalization deal between Israel and the United Arab Emirates in the fall of last year has already helped foster many new business relationships between Jews and Muslims who live in those respective countries.

At the same time, the agreement has afforded Israelis and Emirates who have been quietly working together for years the opportunity to openly partner with each other in order to expand their relationships like never before.

One of the companies that has been doing business in the UAE for several years and is now reaping the benefits of the deal is D’vash Organics, which produces a line of date honey or date syrup (silan) products.

While D’vash Organics is technically based in Los Angeles, its co-founder and CEO Brian Finkel lives with his family in Yakir, an Israeli community in Judea and Samaria, more commonly known as the West Bank.

Finkel, who immigrated to Israel in 2013 from the Chicago area, told JNS that he was unfamiliar with date syrup until he saw “how ubiquitous it was in Israel.”

He added, “I would find it up and down the aisles of Israeli supermarkets.”

In 2017, Finkel went into business with David Czinn—a friend he made as a student during his gap year in Israel who was already in the food business in California—with the hopes of introducing products made from date syrup into American markets. The pair succeeded to entice investors to join their venture, including many Israelis.

After compiling their research, Finkel reached out to the Dubai-based Al Barakah Dates Factory, the largest manufacturer and supplier of date products in the world. Without knowing he lived in Israel, Al Barakah became his largest supplier. As the relationship grew, the two companies ended up forming a strategic partnership.

“Al Barakah approached us about forming a partnership the same week that the Abraham Accords were announced,” explained Finkel. “Even though these two events were unrelated (since they still didn’t know that I was based in Israel), the timing couldn’t have been better. I took one of the first-ever direct commercial flights from Ben-Gurion [Airport] to Dubai in early December, and I was joined by my partner, who flew in from LA. It was only then that I disclosed that I lived in Israel.”

Finkel said that his new partners “had no animosity towards me, and were even very happy and excited that I was from Israel.”

He added that the UAE group had been indirectly doing business with Israel for years, and the heads of the company had even visited Israel in the past. And with the Abraham Accords, he said Al Barakah can now print Hebrew labels on their products, which are found on the shelves in Dubai. “Now they can do this publically,” noted Finkel.

Both sides benefit from the new partnership as Al Barakah was seeking a foothold in U.S. retail markets, which D’vash Organics had, while D’vash was granted access to additional financial resources, along with greater manufacturing and supply capabilities.

D’vash products, including their new date-syrup snack bars, will soon be on the shelves of CVS, a major North American pharmacy, and a deal for some of their other products is in the works with Costco, one of the largest wholesale retailers in the world.

Finkel said that “there is no contradiction in terms between settling the land and doing international business.” He also mentioned that until now, there haven’t been any issues raised because of where he lives.

And he added that he is undeterred by any possible backlash from the anti-Israel BDS movement that discourages companies from doing business with Israelis connected to the settlement movement.

Fleur Hassan-Nahoum, Deputy Mayor of Jerusalem, and co-founder and president of the UAE-Israel Business Council, a group that helps foster business partnerships between Emiratis and Israelis, told JNS that the relationship between the two countries is a victory against BDS.

“Having been to Dubai a number of times, and visiting their supermarkets, Israeli products and Israeli flags are proudly on display,” she said. “This is the opposite of BDS and is the complete antithesis of the discriminatory labeling of Israeli products like in Europe.”

Hassan-Nahoum was referring to European Union nations that label products originating from Judea and Samaria as “Made in Settlements,” as opposed to “Made in Israel,” which is how the products are now labeled in the United States as a result of a directive given by the former Trump administration.

Avi Zimmerman, president of the Judea and Samaria Chamber of Commerce and Industry, a group D’vash Organics is affiliated with, said “the novelty is not in realizing the potential of Jewish-Arab partnerships, but rather, in applying those principles to a global platform.”

He noted that “some choose to fight BDS head-on, while others prefer to ignore the movement.”

Zimmerman added that the approach of the chamber is very different: “We believe in contributing to the global marketplace by generating value. The success of this region has long been rooted in ingenuity, pioneering perseverance and interpopulation partnerships. Our success will continue to grow because our value proposition is tried and true.”

As for the success of Finkel’s company, he says it would not have been possible without its connection to Israel.

At the same time, while his company is not based in Judea and Samaria, he said simply that “if anyone doesn’t want to buy my products because of where I live in the Jewish homeland, they can go somewhere else.”

He made it a point to say that “beyond the obvious and exciting business opportunities afforded by this deal, we see our agreement as a triumph of coexistence, peace, mutual respect and hope for a prosperous future in the Middle East.”