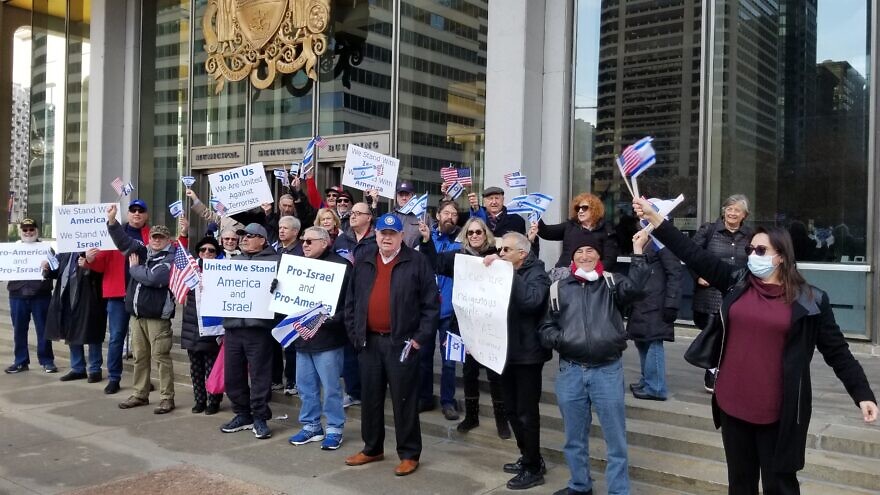 (December 1, 2022 / JNS) Around 40 supporters of Israel held a counter-vigil to a City of Philadelphia-sponsored “International Day of Solidarity with the Palestinian People,” with accusations that a pro-Palestinian participant snapped an Israeli flag in half.

“The city claims that the event is not political, that they just want to honor [Palestinian] culture and contributions to the city. It’s absolute malarkey,” Steve Feldman, executive director of the Greater Philadelphia chapter of the Zionist Organization of America, told JNS. “There has been nothing to honor Jewish immigrants, nothing for Israeli immigrants. There’s been nothing of the sort by the city.”

The event on Tuesday coincided with Palestine Solidarity Day, which has been observed since 1977 through a United Nations General Assembly resolution. The Nov. 29 date marks the anniversary of the passing of a General Assembly resolution partitioning the British Mandate of Palestine into a Jewish and an Arab state, a resolution that Palestinian Arabs still reject. Palestinians refer to the subsequent creation of a Jewish state as the “Nakba,” or catastrophe.

The city scheduled an International Day of Solidarity with the Palestinian People at its Municipal Services Building, hosting the affair for the second straight year. According to a promotional poster, the event was sponsored by the Office of the City Representative (OCR) and Mayor Jim Kenney’s Office of Immigrant Affairs.

Kenney issued a proclamation for the event, delivered by his city representative. The day included speeches by a City Council member and a member of the anti-Israel Jewish Voice for Peace organization.

The poster for Tuesday’s event featured the flag of the PLO, a U.S.-designated terror organization responsible for the murder and maiming of thousands of Israeli civilians, along with dozens of American and European citizens, dating back to its 1964 founding.

Feldman said that the date selected for the event—one that refers to the founding of Israel as a catastrophe—is indicative of the event’s purpose and messaging.

“It’s an affront to the Jewish community, given this time of rampant violence and incitement against Jews and Jewish institutions. That the city, under the auspices of the mayor’s office, would have their names on this poster that promotes violence is really appalling,” said Feldman.

Feldman said the police saw but ignored the destruction of an Israeli flag, adding that the ZOA is checking video footage to see if the incident was recorded.