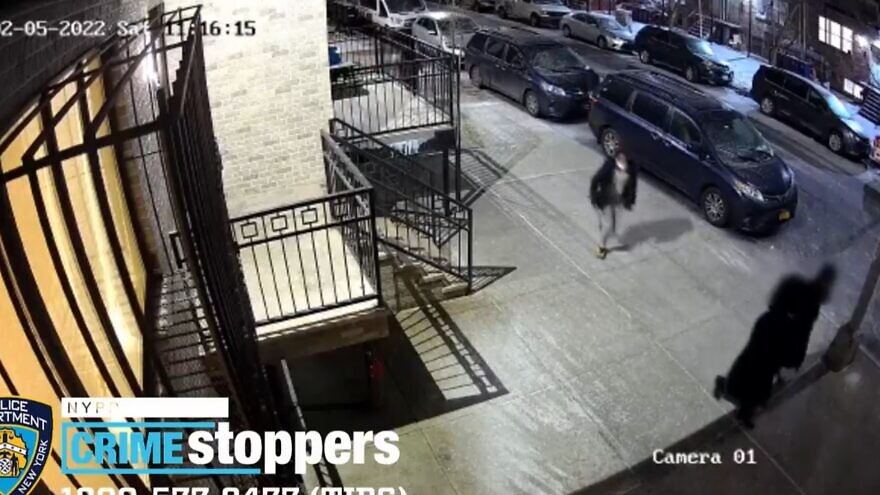 (February 7, 2022 / JNS) The Anti-Defamation League New York/New Jersey is offering a reward of up to $7,500 for information leading to the arrest and conviction of those responsible for two assaults in the heavily Chassidic section of Williamsburg in Brooklyn, N.Y.

“Attacks against visibly identifiable Jews here in New York and New Jersey have become practically a weekly occurrence. The Jewish community is on the extreme edge, and this violence has got to stop. It is being normalized, and we simply cannot accept that as the state of affairs,” said Scott Richman, ADL regional director for NY/NJ.

According to the New York Police City Police Department, on Feb. 4 at approximately 10:30 p.m., “an individual approached a male, 24, dressed in traditional Chassidic attire and punched him in the face.” The case is being investigated by the local police precinct and the NYPD Hate Crime Task Force.

In a security-camera video of that incident, a man can be seen coming up behind a Chassidic couple and punching the man, causing him to stumble and topple his shtreimel, the hat that members of the community wear on Shabbat.

According to the ADL, the second incident occurred in the same area as the first assault, though “limited details are available.”

In a posting on social media, the United Jewish Organization of Williamsburg and North Brooklyn—a social-service organization representing the Satmar community—posted that local police are increasing patrols in the area, and that “we’re also in touch with the Brooklyn District Attorney’s office to assure through investigation and action. There are rumors of several attacks. Whoever experienced or witnessed an incident should please report it … for the safety of area residents.”

In addition to the assaults, school buses with the school names written in Hebrew on them were vandalized with swastikas and other graffiti.

Late Sunday night, Mayor Eric Adams tweeted: “Hatred won’t be tolerated in our city. Anti-Semitic acts of violence are an attack on every New Yorker, and they will be met with the force of the entire city.”

“We are horrified that yeshivah school buses clearly marked in Yiddish could be vandalized in such a way with hateful symbols, especially on the same day that we found two Jewish men to have been assaulted in the area,” tweeted the New York/New Jersey branch of the ADL.