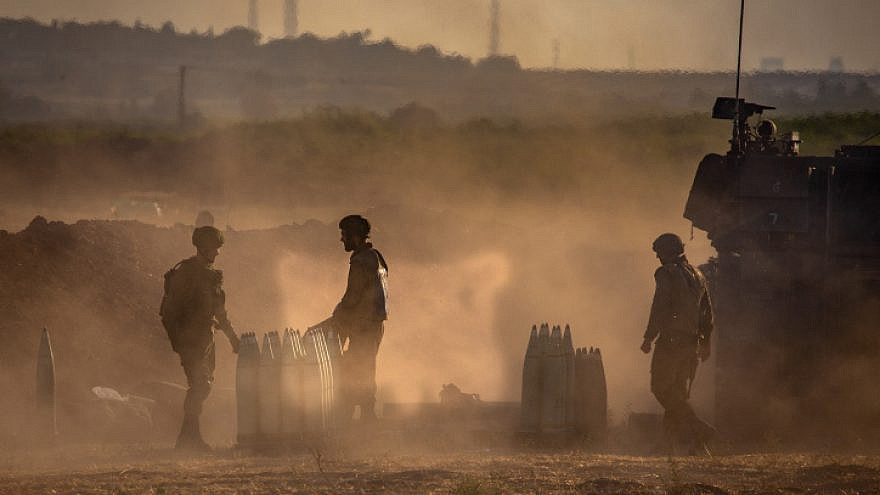 Israel Defense Forces Artillery Corps at the border of the Gaza Strip in response to thousands of rockets being launched towards population centers in the Jewish state, May 19, 2021. Photo by Olivier Fitoussi/Flash90.
Spread the word.
Help JNS grow!
Share now:

(May 20, 2021 / JNS) Israel and Hamas, the Palestinian terrorist group that runs the Gaza Strip, have agreed to a ceasefire after 11 days of hostilities.

According to a statement from the Israeli Prime Minister’s Office, the security cabinet “unanimously accepted the recommendation of all of the security officials, the Israel Defense Forces Chief of Staff, the head of the ISA, the head of the Mossad and the head of the National Security Council to accept the Egyptian initiative for a mutual ceasefire without pre-conditions” to take effect “at a time to be determined.”

It added that “the political leadership emphasizes that it is the reality on the ground that will determine the future of the operation.”

Israeli security officials reportedly told cabinet ministers that Hamas’s military capabilities had been badly damaged, including drones, anti-tank units, tunnels and operations on the ground for intelligence-gathering and electronic warfare, reported Axios. While Hamas still has a stockpile of rockets capable of reaching Tel Aviv, its launchers were damaged as well.

A Hamas official based in Qatar confirmed the ceasefire to The New York Times, saying that it would begin at 2 a.m. local time on Friday.

Hamas claims that had commitments have been made about certain Israeli policies in Jerusalem, such as policing at the Al-Aqsa mosque and a longtime property dispute concerning the eastern Jerusalem neighborhood of Sheikh Jarrah; however, Israeli officials have denied this outright and affirmed that the ceasefire was unconditional.

More than 4,000 rockets have been fired on Israel from Gaza since May 10, which have killed 12 people in Israel, mostly civilians, and 227 people in Gaza, a number of them terrorist operatives.

Israel’s aerial and artillery campaign focused on targeting Hamas’s extensive terror network, including tunnels for moving fighters and munitions. Israel has also sought to target the organization’s leadership and fighters.

Diplomats from Egypt, Qatar and the United Nations mediated between both sides during the conflict. The United States also played a significant role behind the scenes.

The United States also considers Hamas to be a Foreign Terrorist Organization and therefore shares no diplomatic ties.